Groups Push Gov. Hochul To Invest In “Better Buildings” For Health And Climate 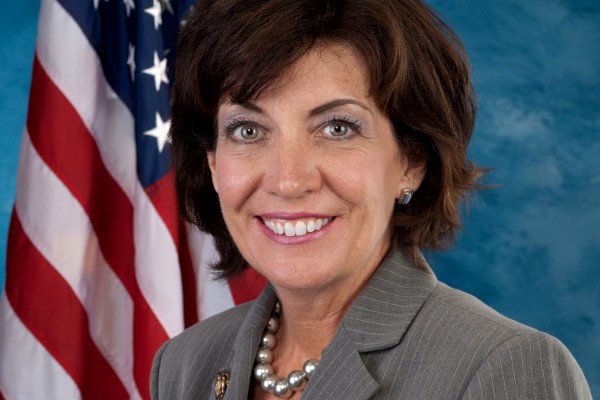 As the health hazards and climate impacts of burning gas and other fossil fuels for cooking and heating in buildings gain more attention nationally.

Advocates are calling on New York Governor Kathy Hochul to move at least 2 million homes off fossil fuels by 2030 and to make a major investment in efficient, electrified affordable housing.

Today, over 200 groups sent a letter to the Governor calling for housing that is affordable, free of indoor air pollution, and environmentally sustainable.

The letter calls on the Governor to take four actions:

“Buildings account for one-third of New York’s greenhouse gas emissions because most of us still warm our spaces, cook our food, and heat our water by burning fossil fuels right inside our buildings,” reads the letter. “Now, we must equitably phase out these fossil fuels and ensure that people can afford to switch to modern geothermal and air source heat pumps and induction stoves – a process called beneficial electrification.”

The letter is a response to studies showing that the risk of childhood asthma increases significantly in homes where gas stoves are used, and that New York leads the nation in premature deaths resulting from the air pollution caused by burning gas in buildings. A recent story produced by National Public Radio monitored air quality for 30 minutes in a kitchen while a gas stove was in use and recorded nitrogen oxide (NO2) pollution at levels twice the limit set by World Health Organization guidelines.

The goal of at least 2 million all-electric homes is what New York State’s own researchers have said is necessary to achieve the ambitious 2030 greenhouse gas reduction mandates spelled out in the Climate Leadership and Community Protection Act. While some households and developers can afford to switch from fossil fuels, others face financial and other barriers.

In order to achieve the goal of at least 2 million electrified homes, the letter calls on the Governor to use federal funding coming through the American Rescue Plan and the infrastructure bill as well as funds from multiple state agencies to make a massive investment in electrifying affordable housing in the state’s most vulnerable communities. In addition to heat pumps and induction stoves, the fund would be used to get buildings “electrification-ready” through energy efficiency, electrical panel upgrades, and mold, lead, and asbestos remediation.

The letter also calls on the Governor to create building codes that will exclude fossil fuels from new construction by 2024, and require the installation of heat pumps and electric stoves when replacing fossil fuel appliances in existing buildings starting in 2028. To support this transition, the letter says that New York’s utility regulators will need to plan to phase out fossil fuel systems and design electric rates to support affordable building electrification.

“The future needs to be electric because it is healthier and safer for tenants like me,” said Maria Espada a NYC resident and participant in WE ACT for Environmental Justice’s Out of Gas Pilot Project. “Too many of my neighbors have had to call the fire department because of the smell of gas, and some have had to go to the hospital because of the fumes, which is extremely concerning. Our community suffers from asthma at higher rates than other parts of the city, and I know from experience that using my gas stoves triggers my asthma. I care for my neighbors deeply and want what’s best for them, and that starts with making our homes safer and healthier.”

“In our community, we have a developer of an affordable housing project set to break ground in 2022, who insists on building with gas heating and cooking, and no air-conditioning,” said Irene Weiser, coordinator of Fossil Free Tompkins, based in Ithaca (Tompkins County). “This misguided use of public and private funds will result in substandard, obsolete housing that subjects disadvantaged residents to health risks from both heat stress and poor indoor air quality. I urge Governor Hochul to quickly enact this comprehensive package of reforms to ensure that affordable housing is built to standards that meet the challenges we face from climate change, and will protect our vulnerable residents so that they do not continue to be left behind.”

Katie Quinn-Jacobs, a member of Mothers Out Front NY, said: “I’m a registered nurse and mother of three adult sons. The health and safety of children has always been my top priority.. Six years ago, we installed a geothermal heat pump system in our upstate NY farmhouse which we had been heating with propane and wood. As a result, our house is warmer, and our heating bills plummeted from $4000/year to $400/year. For both cost and climate reasons, it is incumbent on Governor Hochul to ensure that this safe, convenient, reliable, ultra-efficient technology is accessible to all New Yorkers.

“We urge New York State Governor Kathy Hochul to take bold action to equitably address the climate crisis, which is hitting low-income communities and communities of color the hardest,” said Sonal Jessel, Director of Policy at WE ACT for Environmental Justice. “Studies show that people of color are the most concerned about the climate crisis and yet they often pay disproportionately higher amounts of their household income for energy, live in the most energy inefficient homes, and have the least access to renewable energy. By making a significant investment to improve energy efficiency and access to renewable energy in these communities, the state can ease the inequitable burden among those most impacted by climate change.”

“Residents of Buffalo’s most marginalized communities live in the oldest and some of the most unhealthy housing stock in the country and have been denied access to energy efficiency investments for far too long,” said Clarke Gocker, Director of Policy and Strategy at PUSH Buffalo. “Residents remain dependent on dirty fossil fuel energy sources and are vulnerable to the volatility of commodity fuel markets – home heating costs are projected to increase by 43% this winter alone which will have disastrous consequences for already debt-burdened utility customers. We’re calling on Governor Hochul, Buffalo born and raised, to invest now in a comprehensive better buildings strategy that provides targeted, direct benefits to disadvantaged communities in line with the mandates of the Climate Leadership and Community Protection Act (CLCPA).”

“Governor Hochul can deliver better buildings and high-quality jobs for New Yorkers, especially those in disadvantaged communities that have suffered from chronic underinvestment in housing and jobs,” said Samantha Wilt, Senior Policy Analyst for NRDC (Natural Resources Defense Council). “Now is the time to make a big investment to transform New York’s building sector, to make our homes and schools healthier, more efficient, and better for the climate through bold action, including creating a fund to efficiently electrify affordable housing. We all stand ready to help improve our buildings, building back better in New York for a healthy, carbon-free future.”

“It is heartbreaking how many households cannot take advantage of existing energy efficiency programs because of pre-existing mold, lead, knob-and-tube wiring, and asbestos issues,” said Lindsay Speer, Director of Community Programs for Alliance for a Green Economy. “Forty-seven percent of Syracuse’s houses were built before 1939. These households struggle with extremely high energy bills, trapping them in a cycle of poverty, disinvestment and health-affecting pollution. With a Green Affordable Housing Fund, Governor Hochul has the opportunity to make a huge difference in people’s lives at the same time as making a huge difference for the climate.”

“As a co-sponsor of the Climate Leadership and Community Protection Act, I was proud to help pass this nation-leading climate legislation, and we have no time to lose if we are going to meet the law’s ambitious climate and equity goals,” said Jen Metzger, Senior Policy Advisor to New Yorkers for Clean Power and former NYS Senator. “We know from the analysis conducted for the NYS Climate Action Council that we have just nine years to electrify up to two million homes with heat pumps in order to reduce climate-damaging emissions by 40% by 2030. I urge Governor Hochul to take the necessary steps, including creating a Green Affordable Housing Fund in her first budget as Governor, so that New York stays on track and does not leave disadvantaged communities behind.”

“It’s time for bold action, accelerated investments and robust interim targets to equitably decarbonize all of New York’s buildings by 2045,” said Lisa Dix, New York Director for the Building Decarbonization Coalition. “Governor Hochul can make New York a national climate leader by committing to equitably decarbonizing at least 2 million homes and businesses by 2030 and establishing an affordable housing decarbonization fund to ensure investments will be prioritized in disadvantaged communities. This bold action will create market certainty and transform New York into a building decarbonization jobs and economic powerhouse, by attracting manufacturers, building out the supply chain, and creating tens of thousands of high wage jobs for New Yorkers.”

“With our mission to create homes, support people and improve communities, we enthusiastically join with many colleagues to lend our voice to call upon Governor Hochul to make this significant investment in our housing infrastructure that will greatly expand affordability, lift Disadvantaged Communities, reduce the use of fossil fuels and create high paying, career jobs,” said Kevin O’Connor, Chief Executive Officer of RUPCO. “A massive investment in better buildings with an equitable lens is exactly the right approach at the right time. Here in the northeast, we have the oldest housing stock in the nation and this funding will have a huge impact in people’s lives and in our communities.”