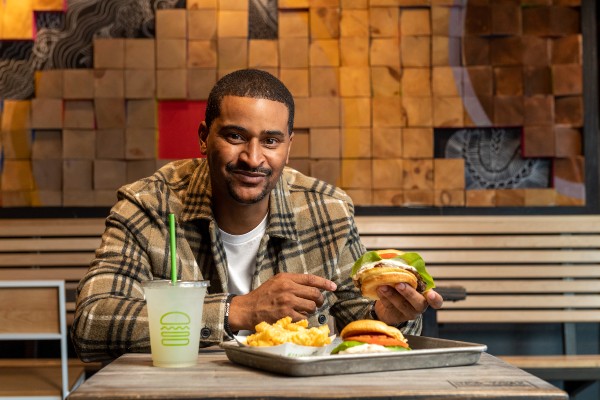 As part of Shake Shack’s collab series Now Serving, Shake Shack’s culinary team has joined forces with chef JJ Johnson to create a one-of-a-kind, limited-time menu for a good cause. The menu, featuring the Little J’s Burger and Curry Crunch Fries, will be available in limited quantities on Thursday, October 28, 2021, at the Shake Shack in Harlem, NY. Net proceeds from the menu will be donated to Rethink Food, a nonprofit organization with the mission to create a more sustainable and equitable food system. With programs designed to address food insecurity, use underutilized food, and make sure everyone can get access to nutritious meals, Rethink has prepared over 5 million meals and directed $25M to communities and restaurants in cities like New York, Nashville, and San Francisco since April 2020.

Conceptualized by JJ Johnson himself, the collab menu is inspired by the Caribbean flavors he grew up with and global tastes acquired from travels. The Little J’s Burger features a gruyere cheeseburger, made with 100% Angus beef, and is topped with braised bacon, onion mayo, lettuce, and tomato on a toasted potato bun.

Served alongside the burger, the Curry Crunch Fries are JJ’s take on Shake Shack’s classic crispy crinkle cuts topped with the chef’s signature curry crunch. Priced at $8.49 and $3.99 respectively, the burger and fries will be available for purchase in-store, through pickup on Shake Shack’s website or delivery and pickup via the Shack app for one day only.

“We are excited and honored to be working alongside Chef JJ Johnson who has made a huge impact on our New York community throughout the pandemic,” said Mark Rosati, Culinary Director of Shake Shack. “This menu, dreamt up by JJ, infuses his unique cooking style and vision into the world of Shake Shack.

The Little J’s Burger and Curry Crunch Fries combine our classic roadside menu with JJ’s take on global flavors and techniques. We can’t wait for our New York fans to dig in!”

To celebrate the collab at the Harlem Shack, guests will enjoy live entertainment from New York’s own Arthur’s All-Stars, an appearance from JJ Johnson, and custom swag, available while supplies last.

“When I think of collaborations for myself and FIELDTRIP, I always look to align with brands that have similar views and values. Shake Shack is all about the community and what better place to collaborate than with the Harlem Shake Shack, in the place I call home,” said JJ Johnson, Chef and Founder of FIELDTRIP. “I’m excited for the Harlem community to experience the FIELDTRIP flavors on the Little J burger and Curry Crunch fries. Shake Shack is beloved in my household, so this is an exciting moment for myself, FIELDTRIP, the community, and my family.”

The collab is the final event of Shake Shack’s “Now Serving” series, where the brand collaborated with local chefs in six cities across America, supported local organizations, and created unique and delicious menu items. 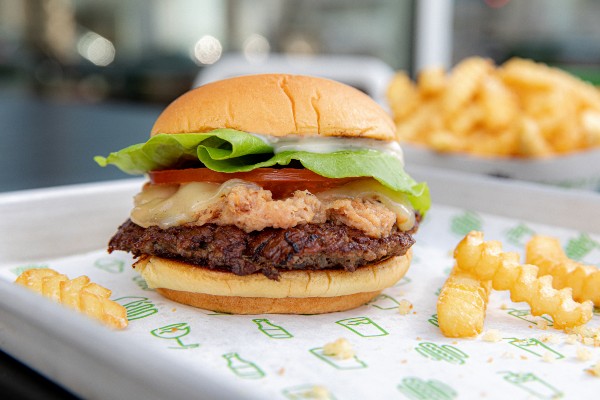 The series highlights Shake Shack’s mission to Stand for Something Good®, from its commitment to delivering the ultimate guest experience and sourcing of premium ingredients to supporting and investing in the people and communities around the world.

For more information on the collab series and for details on upcoming limited-time menu items, visit shakeshack.com.

Shake Shack’s mission is to Stand for Something Good®, from its premium ingredients and caring hiring practices to its inspiring designs and deep community investment. Since the original Shack opened in 2004 in NYC’s Madison Square Park, the Company has expanded to approximately 220 domestic locations in 32 U.S. States and the District of Columbia and more than 100 international locations including London, Hong Kong, Shanghai, Singapore, Philippines, Mexico, Istanbul, Dubai, Tokyo, Seoul and more.

At FIELDTRIP, his made-to-order rice bowl shop that debuted in 2019, Chef JJ highlights rice as a hero ingredient and showcases it in recipes sourced from around the world.

FIELDTRIP’s first outpost opened in Harlem and has since grown to two additional locations including Rockefeller Center and Long Island City. As one of the only fast casual restaurants on Esquire’s “America’s Best New Restaurants” list in 2020, FIELDTRIP utilizes sustainable ingredients and ethically sourced vegetables and proteins, creating a flavorful and diverse dining experience.

The brand’s motto, “Rice is Culture,” was born out of Chef JJ’s belief that rice is the universal ingredient that connects us all and can be found at the center of the table in almost every community. Chef JJ is a Mastercard Ambassador and a television host on Just Eats with Chef JJ airing on TV One’s network Cleo TV.

Founded in 2017, Rethink Food is a nonprofit with the mission to create a more sustainable and equitable food system. Its forward-thinking approach to food philanthropy — transforming underutilized food from restaurants, corporate kitchens, and grocery stores into nutritious, culturally sensitive meals distributed via community-based organizations (CBOs) — has since grown into a multi-pronged solution to address food insecurity: Rethink Certified, a partnership program with food establishments (restaurants, bakeries and catering companies) who utilize their excess food to prepare nutritious meals for local communities in exchange of receiving partial funding resources to integrate community support into their daily operations; Rethink Café, one of NYC’s first pay-what-you-can community cafes, which invites everyone to enjoy a nutritious meal for a suggested donation of $5, and also operates a food pantry; and the Rethink Commissary Kitchen, which transforms donated and excess food items into over 7,000 meals a week for communities facing food insecurity.

Since April 2020, Rethink Food has served over 5 million meals, directed $25M to communities and 90+ food establishments across NYC, San Francisco, and Nashville, and partnered with 185+ CBOs to distribute meals.