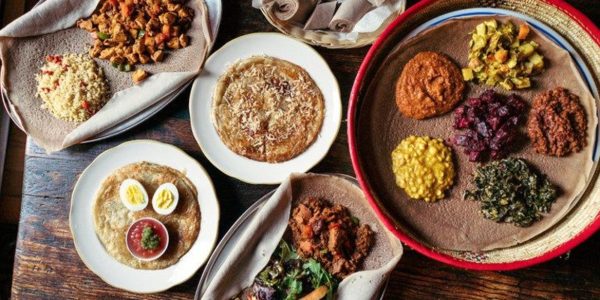 Former Le Grand Dakar chef Pierre Thiam — who strives to be an ambassador of Africa’s culinary history — will open a Pan-African restaurant in Harlem’s Africa Center next month,

where he’ll showcase his native cuisine in a fast-casual format reports NY Eater.

Teranga, which translates roughly to “hospitality” in Wolof, a language spoken in Senegal, will focus on Senegalese cuisine, as well as foods from Nigeria, Mali, the Ivory Coast, and Guinea in bowl-like formats.

The menu is molded by West African ingredients like sorghum and millet paired with dried fruits for breakfast, as well as fonio, a grain that’ll be served within salads and bowls during lunch and dinner, Thiam told the Times in August.

Vegetable and protein bowls like grilled chicken and caramelized onions over Liberian red rice will also be available, plus other vegetarian options like a sweet potato and black-eyed pea stew. Drinks range from hot and cold African coffees, teas, and juices. The menu is gluten-free; see it in full below.

The location of Thiam’s new restaurant within the cultural center makes sense, as he is a vocal advocate for Africa’s culinary history and even appeared in a 2016 episode of the late Anthony Bourdain’s Parts Unknown in his native Senegal. The restaurant will take up a 2,000-square-foot space in the center, overlooking Central Park.

Teranga marks Thiam’s re-entry into NYC’s restaurant world since closing his Brooklyn Senegalese spot Le Grand Dekar in 2011. In the meantime, he’s opened a fine-dining restaurant called Nok by Alara in Lagos, Nigeria, started a NYC-based catering company, and began exporting African grain fonio to NYC restaurants. His career has been marked by accomplishments like a James Beard nomination, cooking for the king of Morocco, and leading a TED Talk on ancient African grains.

The new restaurant joins about 60 other West African restaurants in the city, mainly located in the middle Bronx, Harlem, Jamaica, and Bed-Stuy. A restaurant with a similar grain bowl concept as Teranga is headed to Harlem soon from Eater Young Gun J.J. Johnson.