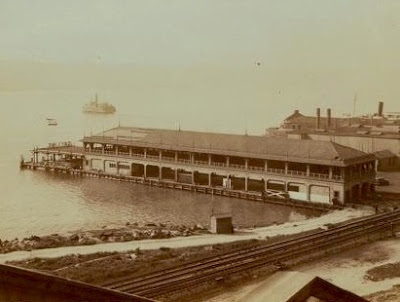 At the turn of the 19th century, Harlem’s 125th Street Ferry And Station was a 24hour hub. Now a city councilman representing Harlem and the Upper West Side is calling on the city to extend ferry service to Manhattan’s west side.

City Councilman Mark Levine wrote in a letter to the city Economic Development Corporation — the agency that operates city ferries — that a new ferry landing should be constructed on the West 125th Street pier. The pier re-opened in 2009 after “years of neglect” and could provide ferry service between Upper Manhattan and New Jersey as well as up and down Manhattan’s west side reports Patch.

“As residential and commercial growth continues up and down the west side, and with key infrastructure already in place at West 125th Street, investing in ferry service now is a sensible step to address the need for an additional transportation hub,” Levine said in a statement. “As New York City embarks on a new phase of ferry expansion through the five boroughs, Northern Manhattan shouldn’t be ignored again.”

Levine also cited the expansion of Columbia University’s Manhattanville Campus as a reason to bring ferry service to Manhattan’s west side. With an influx of students, faculty and staff to the area, ferries could help relieve stresses on the already-overcrowded A and 1 train lines, Levine wrote in his letter.

The city Economic Development Corporation recently completed its 2018 Ferry Feasibility Study to determine where new ferry landings should be built throughout the five boroughs. The city recently opened two new routes servicing Soundview in the Bronx and the Lower East Side.