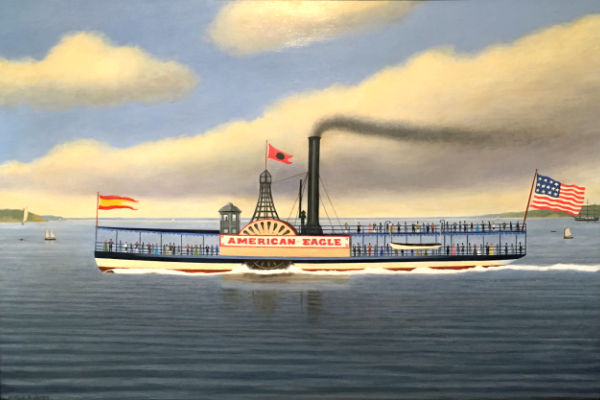 One of the earlier steamboats to ply the waters of the Hudson River, the “American Eagle” made her appearance in 1831.

The vessel soon became a popular vessel along the banks of the lower section of the river and around New York harbor. A complete record of the “American Eagle” cannot be found, and thus the only data concerning the vessel’s construction places the date at 1831 and the location as Hoboken, New Jersey.

Who her builder was or what her dimensions were, has been lost in the pages of time, but she was built for service on the New York and Harlem route to carry commuters between the two communities.

The “American Eagle” was what is now known as the “older type side-wheel steamboat,” powered with the old type cross-head engine. This same type of engine was the predecessor of the more famous walking-beam engine, and the famous old “Norwich” plied up and down the river for many years with a cross-head engine furnishing power for her churning paddle-wheels. It is believed that the “Norwich” was the last steamboat in operation with the old cross-head engine.

Carrying freight and passengers out of New York, the “American Eagle” was in service on various routes for a number of years. In 1843 she was placed on a route between New York and Cold Spring Harbor, leaving the foot of Fulton Street, East River, every afternoon and proceeding to a Harlem dock where she made a landing and was met by horsecars which conveyed her passengers to Fordham where stages ran to immediate points twice daily.

Leaving Harlem, the “American Eagle” pushed her way to New Rochelle, a community that was popular at that period as a summer resort for the well-to-do people of New York City.

Ladies were often seen meeting the steamboat with fashionable rigs- either to transport the “head of the house” to his summer estate or to convey visitors who came up from the city for a stay in the country.

From New Rochelle the “American Eagle” would proceed to Glen Cove and Cold Spring Harbor- its terminus, and would then return to New York City. The vessel continued on this route until 1848 when she was sold.

On May 18, 1849, the steamboat “Empire,” while on her way up the Hudson River to Troy, collided with the schooner “Noah Brown” in Newburgh Bay and had to be beached near Fishkill, with a loss of 24 lives. The steamboat “Hendrik Hudson” replaced the “Empire”, and then the “American Eagle” came on the route until the damaged vessel could be returned to service.

The records next show the “American Eagle” on the route from New York to Low Point and New Hamburgh in opposition to the “William Young”- a vessel that was constructed at Cornelius Carmen’s Shipyard at Low Point for Benjamin Carpenter. This latter vessel was launched on July 17, 1830, and was completed in September of that year.

The “American Eagle” remained on this opposition route for a short while and was then placed in service on the Peekskill-New York route as a freight and passenger carrier. Sundays found the “American Eagle” in use as an excursion vessel.

Later in her history the “American Eagle” was running from Manhattanville to New York as a “market boat,” and from that time on records of the steamboat “American Eagle” have vanished- and what finally happened to the vessel is unknown. 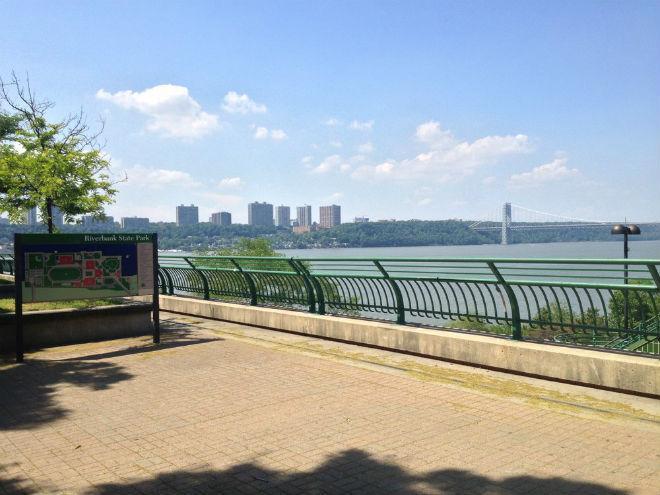 George W. Murdock, b. 1853-d. 1940, was a veteran marine engineer who served on the steamboats “Utica”, “Sunnyside”, “City of Troy”, and “Mary Powell”. He also helped dismantle engines in scrapped steamboats in the winter months and later in his career worked as an engineer at the brickyards in Port Ewen. In 1883 he moved to Brooklyn, NY and operated several private yachts.

He ended his career working in powerhouses in the outer boroughs of New York City. His mother Catherine Murdock was the keeper of the Rondout Lighthouse for 50 years.

Editor’s Note: The following text is a verbatim transcription of an article written by George W. Murdock, for the Kingston (NY) Daily Freeman newspaper in the 1930s. Murdock, a veteran marine engineer, wrote a regular column. Articles transcribed by HRMM volunteer Adam Kaplan. For more of Murdock’s articles, see the “Steamboat Biographies” category at right.