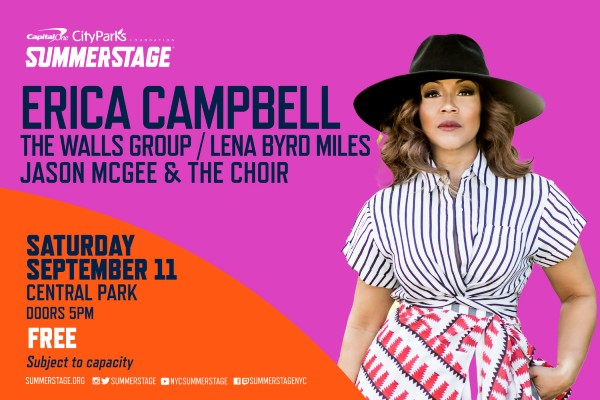 Erica Campbell (as one-half of the dynamic gospel duo Mary Mary) has recorded seven albums, won four GRAMMYS®, sold millions of records, starred in her own TV show, and helped expand the reach of contemporary gospel music by incorporating elements of soul music, hip hop, funk and jazz to their sound.

She has also carved out a career as a solo artist, with two solo LPs and her own GRAMMY®—for her debut album Help — as well as her nationally syndicated radio show “Get Up! Mornings with Erica Campbell”.

Joining her are stellar award-winning and GRAMMY®- nominated siblings, The Walls Group, this generation’s most culturally relevant gospel crew; Lena Byrd Miles, one of the most sought-after vocalists in the contemporary gospel; and Jason McGee & The Choir, a collective group of individual singers and artists who’ve come together to reach the world through music, fashion, and entertainment.

This performance will also be live-streamed for free at SummerStageAnywhere.org.