‘Soccer Day’ Kicks Off From Harlem To Hollis 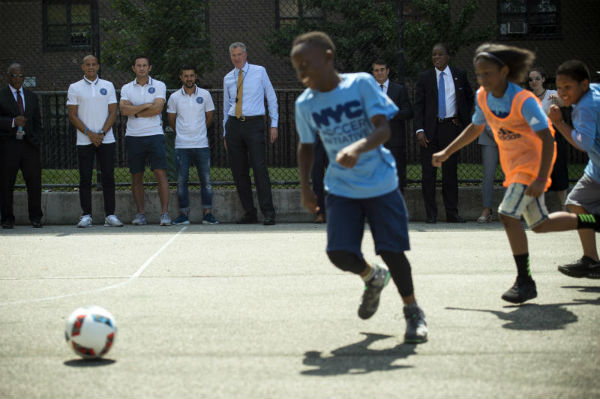 To celebrate the opening of the next 10 New York City Soccer Initiative mini-soccer pitches from Harlem to Hollis.

New York City FC (NYCFC) and partners (the Mayor’s Fund to Advance NYC, the U.S. Soccer Foundation, Adidas and Etihad Airways) will be hosting an unprecedented ‘Soccer Day’ throughout the five boroughs of New York City on Monday, October 15, 2018.

Launched in 2016, New York City Soccer Initiative is a first-of-its-kind $3 million public-private partnership to build and maintain 50 soccer pitches in underserved NYC neighborhoods in just five years, and provide free programming for New York City School children, focused on healthy, active living, and mentorship. Together, the partners have a shared goal to repurpose underutilized public spaces in underserved neighborhoods into safe places to promote physical health and youth development and community engagement where soccer is not always accessible. This model has been rolled out in other urban neighborhoods throughout the country since the Initiative’s inception.

On October 15, 2018, the New York City Soccer Initiative partners will proudly open the next group of 10 brand new soccer pitches (outlined below); 20 total pitches will be in use by the end of 2018. To celebrate this exciting milestone, City organizations and local communities will come together around ‘Soccer Day’ in New York City. The day will include:

“The 10 additional soccer fields built by the New York City Soccer Initiative creates safe spaces for hundreds of children and their families to come together for exercise and social activity. Soccer, like other team sports, teaches young people how to work together, and lays a strong foundation for good health and friendships among our youngest New Yorkers. This combined effort between the Mayor’s Fund and the partners of the New York City Soccer Initiative is one of the many ways public-private partnerships make our great City even greater.”

“Soccer is a great team sport with international appeal. We’re thankful to the Mayor’s Office, NYCFC and all of the partners involved in the New York City Soccer Initiative. The new pitches at Playground 62 in Queens and Castle Hill Playground in the Bronx will give kids a kick-start to lead healthier and more active lifestyles.”

“Soccer Day in New York City will be a first-of-its-kind celebration of our sport and is a testament to how soccer is continuing to grow throughout our City. We have a fantastic lineup of soccer activity planned for the local communities with our players, fans and terrific partners. There are many different ways to get involved from joining one of the soccer festivals to enjoying the soccer programming on our broadcast partners, YES Network and WNYE-FM.

The highlight of Soccer Day will be the opening of 10 new community pitches. Opening new pitches each fall has become a special annual event we look forward to. We have seen how these pitches have become community hubs that bring people together around soccer and we are proud to be a leader in increasing access to our sport and safe places to play.”

“Since the start of this initiative, it’s been exciting to see the power of these new pitches to bring entire communities together around the game we all love. We’re excited to continue to open new pitches across the city and work with our partners to ensure that all youth have the opportunity to play the game, embrace a healthy lifestyle, and learn critical life skills that help them succeed on and off the pitch.”

“These ten new fields mark a huge and exciting milestone for the NYCSI, and we’re honored to work with these terrific partners towards our shared goal of opening 50 new soccer fields in New York City. At adidas, we truly believe that through sport, we have the power to change lives, and we’re proud to be a part of this project to help bring more sports to more kids, allowing them to build a sense of team and community that will benefit them now and in their futures.”

“Soccer is a sport that is close to our hearts at Etihad Airways, with several longstanding partnerships and programs in place to help promote and advance the sport worldwide. We are particularly proud to be working alongside partners on the New York City Soccer Initiative, which will prove an inspiring source of positive change for many youths throughout the city.”