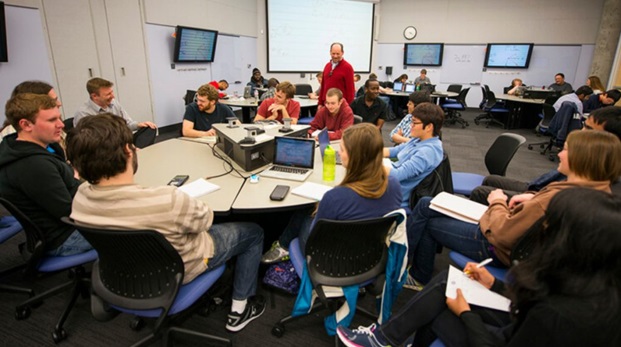 Although a classroom may not be a student’s favorite place to spend their time, a new study conducted by researchers from UCLA has identified yet another variable that could affect students’ health: sitting.

The study revealed that sitting for extended periods of time, as most college students are used to doing during class, can increase the risk of disease. The researchers say it’s important that universities make a concerted effort to create opportunities for students to stand up, walk around, and stretch throughout class.

“A cultural change has to take place — that it’s OK to take a stretch break, to stand up during a lecture, to fidget when needed — it’s ‘good’ for health’s sake,” said Angelia Leung, a professor in the World Arts & Cultures/Dance Department. “My students have an excuse because dance classes naturally involve movement, but we can extend these benefits to any class on campus with something as simple as short stretching breaks — no dancing required.”

The researchers were most interested in learning what students and faculty already knew about sitting still for too long and how they felt about incorporating more movement into class times. They conducted focus groups with undergraduate and graduate students, as well as with several faculty members, to gauge their understanding of the risks associated with being sedentary for long periods of time.

None of the students were concerned about the health risks associated with sitting throughout longer class times, though they did mention feeling self-conscious about getting up or walking around in the middle of class — even in classes with fewer students. Professors were similarly unaware of how being still for too long can be bad for students’ health.

A number of the participants also thought that being active later in the day would be able to reverse the effects of sitting for long periods of time, which researcher Burt Cowgill explained is false.

“Many people thought they would be fine if they also squeezed in a 30-minute jog, and that’s just not what research shows us,” Cowgill said.

The researchers cited previous studies that have linked prolonged sitting with increased risks for diseases and conditions ranging from obesity and heart disease to cancer and diabetes.