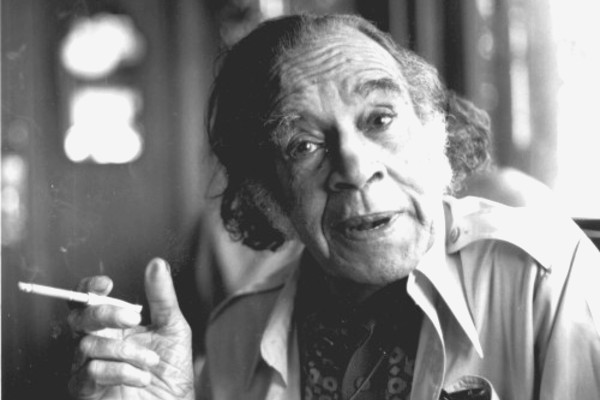 Despite being a part of a group of many gay Harlem artists, Nugent was among only a few who were publicly out.

Recognized initially for the few short stories and paintings that were published, Nugent had a long productive career bringing to light the creative process of gay and black culture.

He completed his schooling at Dunbar High School in 1920, and moved to New York following his father’s death.

After revealing to his mother that he decided to devote his life to only making art she worried about his lack of interest in getting a stable job, so she sent him to Washington, DC, to live with his grandmother.

To earn enough money to sustain the family, Nugent would pass as white to earn higher wages.

While there, he also experimented with passing, and went by the name Ricardo Nugen di Dosocta, even going as far as giving an address located in the Spanish legation in Washington.

In an interview, he claimed he did this for its “convenience” as it allowed him to avoid “bearing the stigma” of being African American.

At that time, he met famous writers like Langston Hughes and Georgia Douglas Johnson. They became friends, influenced each other’s works, and collaborated on works together.

In 1925 his first works as a writer were published. These included his poem “Shadow” and his short story “Sahdji”.

The majority of his life and career took place in Harlem in NY, and he died of congestive heart failure on May 27, 1987 in Hoboken, New Jersey.

During his career in Harlem, Nugent lived with writer Wallace Thurman from 1926 to 1928, which led to the publishing of “Smoke, Lilies, and Jade” in Thurman’s publication Fire!!.

The short story was written in a modernist stream-of-consciousness style. Its subject matter was bisexuality and more specifically interracial male desire.

Before committing his life to his art, Bruce Nugent worked several ordinary jobs, including hat seller, delivery boy, and bellhop. During his time as a bellhop he fell deeply in love with a hotel kitchen employee.

It is believed that the character of Beauty from “Smoke, Lilies and Jade” is based on this man.

Many of Nugent’s illustrations were featured in publications such as Fire!!, along with his short story.

Four of his paintings were included in the Harmon Foundation’s exhibition of Negro artists, one of the few venues available for black artists in 1931.

His only stand-alone publication, Beyond Where the Stars Stood Still, was issued in a limited edition by Warren Marr II in 1945. He married Marr’s sister, Grace, on December 5, 1952.

In the late 1930s Nugent worked with other iconic Harlem Renaissance writers, Claude Mckay and Ralph Ellison, on the Federal Writers Project. In this project he was employed to write biographical sketches.

Thomas Wirth, contemporary and personal friend of Richard Nugent, claimed that Grace loved Richard and was determined to change his sexuality.

Nugent attended the Community Planning Conference at Columbia University in 1964 as an invited speaker.

The conference was held under the auspices of the Borough President of Manhattan/Community Planning Board 10 and Columbia University.

The idea of forming an organization to promote the arts in Harlem emerged from the conference’s Cultural Planning workshop and led to the formation of the Harlem Cultural Council.

During the 1960s, Nugent and other coworkers founded the Harlem Cultural Council, which sought municipal and federal funds for the arts and mainly worked on construction for the Schomburg Center for Research in Black Culture.

Nugent also worked as an artist, performer, and commentator. He took an active role in this effort and attended numerous subsequent meetings.

He was elected co-chair (a position equivalent to vice president) of this council. He also served as chair of the Program Committee until March 1967.

While he was more well known for his writing and illustrations, Nugent also spent many of his years touring as a dancer.

He appeared in shows like Run, Little Chillun (1933) and even toured for two years in a production of Porgy in 1929.

In the 1940s he became a member of the William’s Negro Ballet Company. He was also a part of other dance companies, including Hemsley Winfield and Asadata Dafora, even dancing in drag with the New Negro Art Theatre Dance Troupe.

Nugent’s aggressive and honest approach to homoerotic and interracial desire was not necessarily in the favor of his more discreet homosexual contemporaries.

Alain Locke chastised the publication Fire!!! for its radicalism and specifically Nugent’s “Smoke, Lilies and Jade” for promoting the effeminacy and decadence associated with homosexual writers.

Nugent’s friends, Langston Hughes, Zora Neale Hurston, Aaron Douglas, Gwendolyn Bennett, and John P. Davis, all frequented “Niggerati Manor,” where they socialized with each other and where the origination of “Fire!!!” was based.

As well as his friends, Nugent was also influenced by Aaron Douglas and Georgia Douglas Johnson. Their aesthetics were seen in his work. They also helped get his work into various magazines.

His work, after its resurfacing, brought to light the lifestyle of black gay artists during the Harlem Renaissance.

His use of codes made much of his work pass unseen by straight contemporaries, under the disguise of biblical imagery, for example.

Nugent bridged the gap between the Harlem Renaissance and the black gay movement of the 1980s, and was a great inspiration to many of his contemporaries.

Nugent drew a picture of “a washing drawing of an African girl standing in a hut. The doorway of a hut, apparently jangling her bracelets”.

Locke liked his picture and suggested that he create a story about it. Therefore, Nugent called the girl “Sahdji.”

His short story takes place in East Africa and is centered around a small tribe in the area of Warpuri. Sahdji is the beautiful wife of Konombju, the chief of the tribe.

However, Sahdji’s stepson, Mrabo, is in love with her. Therefore, he hopes his father’s death will enable him to take his bride.

The murder appears to be a hunting accident and the tribe mourns the loss through a funeral ceremony. Mrabo triumphantly awaits his new bride, Sahdji; however, the broken-hearted Sahdji mourns her husband’s death and throws her body into his funeral pyre while Mrabo watches.

This story was initially interpreted as a gay prose text. However, it is now regarded as an African morality tale that condemns murder, not homosexual love.

Locke encouraged him to write the story again, and he created Sahdji: An African Ballet. It premiered at Howard University in the late 1920s and was also produced at the Eastman School of Music in Rochester, New York, in the summer of 1932. His works received honorable mentions.

Smoke Lilies & Jade is a Bildungsroman (coming-of-age) play by writer Carl Hancock Rux. It is loosely based on Nugent’s 1926 short story, “Smoke, Lilies and Jade” (as well as elements of Nugent’s own life).

The play concerns the psychological and moral growth of its protagonist Alex as he reflects on his love for a man named Beauty (a composite character of all the men the protagonist has loved intimately throughout his life) and a woman named Melva (a character loosely based on Nugent’s wife, Grace Elizabeth Marr) as well as the relationships, racial injustices and personal tragedies that befell many of his Jazz Age Harlem compatriots.

The play was initially commissioned by the Joseph Papp Public Theater and was later produced by the CalArts Center for New Performance.