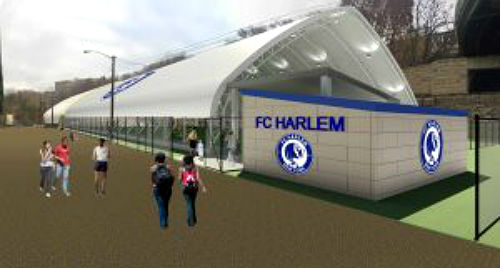 Launched in 2016, NYCSI is a first-of-its-kind $3 million public-private partnership between the Mayor’s Fund to Advance New York City, New York City Football Club (NYCFC), U.S. Soccer Foundation, Adidas, and Etihad Airways, to build and maintain 50 mini-pitches across the city over five years and expand free soccer programming to 10,000 young New Yorkers. By the end of 2019, 30 pitches will be open for play, providing community gathering spaces for New Yorkers in all five boroughs.

The centerpiece of the event was a photo exhibit featuring submissions from young New Yorkers documenting the soccer culture in their communities through photography. NYCFC team captain Alex Ring announced the winner of the photo contest, Kweku Brew, whose photos featured a mini-pitch in the Bronx where “everyone practices, comes to play, and learns about each other and the about the game.”

Young soccer players also had the opportunity to break in the new Flushing Meadows Corona Park pitch with drills and games led by NYCFC players and community coaches, and a surprise guest appearance from Queens’ own DJ Whoo Kid closed out the afternoon.

“When we invest in recreational spaces for our children, it is more than designating a play space; we energize entire communities and bring neighbors together for positive and healthy social experiences,” said First Lady Chirlane McCray. “Thank you to the New York City Football Club, the U.S. Soccer Foundation, Adidas and Etihad Airways for your commitment to our city’s children. Together, we are building stronger communities, and helping young people develop habits that will promote wellness throughout their lives.”

“It is truly incredible to see what can be accomplished when the right partners come together under a common cause—in this case, to create gathering places that encourage joyful play, strengthen a sense of community, and bring energy to underutilized spaces across this great city. For three years, the New York City Soccer Initiative has been of vital importance to the Mayor’s Fund, and to celebrate all 30 of these mini-pitches—and the communities they exist within—today is an honor,” said Toya Williford, Executive Director of the Mayor’s Fund to Advance New York City.

“For the past six years, the Mayor, First Lady, and City leaders have been focused on how government can work with local stakeholders and private sector partners to create healthier and more vibrant communities—emphasizing a collective action approach to physical health, mental health, investing in historically overlooked and underserved areas, and energizing community spaces—and few projects have embodied all of those goals and values better than the NYC Soccer Initiative. As we continue to march—on-time and on-budget—towards our final goal of 50 sites around New York City we’re thrilled to thank and recognize the public agencies and private partners who are helping make this happen, and the neighborhoods of New Yorkers who are using the power of play and sport to bolster community cohesion and personal achievements,” said Darren Bloch, Senior Advisor to the Mayor and Director of the Mayor’s Office of Strategic Partnerships.

“Three years ago, we opened the first 10 mini-pitches as part of this Initiative. Now, standing here in the iconic Flushing Meadows Corona Park where soccer is the heart of the community, we celebrate the newest pitches that will ultimately bring us to 50 safe spaces to play in New York City. Growing up in the area, I know how important it is for kids to have a place to kick the ball around. It makes me very proud to see how we are providing more access to free soccer on such a large scale. Additionally, it has been remarkable for our team, players, and staff to see how a soccer pitch can bring a community together and this 50-pitch project is proof of that,” said Claudio Reyna, NYCFC Sporting Director.

“We’re thrilled to celebrate the opening of the next 10 mini-pitches as part of the New York City Soccer Initiative alongside a dedicated group of partners who have expanded access to the game to thousands of New Yorkers over the past three years. These new safe places to play will ensure more youth have the opportunity to participate in programming where they can develop critical life skills that will help them succeed on and off the pitch,” said Ed Foster-Simeon, President and CEO of the U.S. Soccer Foundation.

“It is really important that soccer is accessible to kids in the city of New York. Through sport we have the power to change lives and working on such an initiative with NYCFC, Etihad, the U.S. Soccer Foundation and the Mayor’s Fund creates an environment to not only do that but it also brings communities together through a sport we all love,” said Ernesto Bruce, adidas Key Cities General Manager.

“As a leading global airline, Etihad Airways is both keen and proud to be associated with projects that are aligned with our core values of hospitality and camaraderie. For us to support the New York City Soccer Initiative was hugely important to the business as we take great pride in our CSR programs and as a proud partner of New York City Football Club we look forward to strengthening our bond with the club and the local communities. Etihad is still only 16 years young yet will celebrate 14 years of flying into New York in November this year, and with this great city so important in our network, we are excited to see the influence we and the other partners are having on the wellbeing of youth across all five boroughs,” said Vincent Frascogna, Etihad Airways Vice President, Americas.

NYCSI partners have a shared goal to repurpose underutilized public spaces in underserved communities into environments that promote wellness, youth development, and community engagement. This model has been rolled out in other cities since the Initiative’s inception.

Site selection for the fields is targeted toward neighborhoods that are focuses of Mayor Bill de Blasio’s Building Healthy Communities Initiative, NYC Parks’ Community Parks Initiative, and the Mayor’s Action Plan for Neighborhood Safety or the Young Men’s Initiative.

To see other locations in your neighborhood click here.