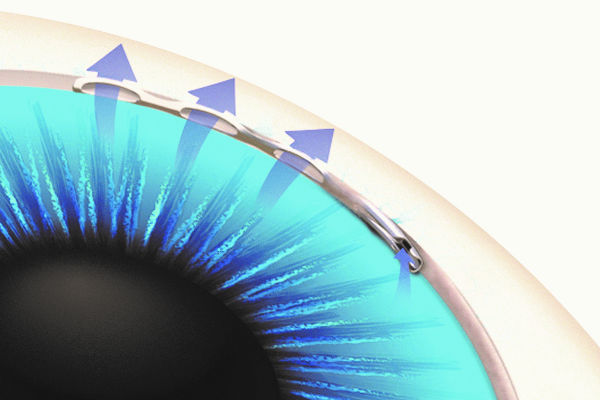 In the United States, over 3 million Americans suffer from glaucoma. This is the second leading cause of blindness worldwide. Now a new procedure is here to relieve the mechanism and symptoms of the disease and help prevent blindness.

Glaucoma is caused by damage to the optic nerve described as cupping. While there are known genetic risk factors, the only manageable symptom is elevated eye pressure. Elevated pressure damages the optic nerve and can result in vision loss and blindness if not treated properly. Traditionally most glaucoma patients use eye drops to lower pressure and relieve the stress on the optic nerve. Unfortunately eye drops must be taken for as long as the patient lives, and as a result, managing the use of eye drops— which sometimes need to be administered multiple times during the day— can be cumbersome. Research has shown that as few as 50% of patients stay on their prescribed medicines past 6 months. Eye drops do not address the mechanism of glaucoma.

The most common form of glaucoma is Primary Open Angle Glaucoma and is characterized by reduced aqueous outflow resulting in elevated eye pressure. In patients over 50 years of age, the cataract, or enlarged lens, is the most common identifiable cause of glaucoma in my practice. Aqueous drainage depends on a functioning trabecular meshwork and a patent canal of Schlemm. The enlarged lens compresses Schlemm’s canal and creates pigment liberation by rubbing against the posterior iris. The pigment is trapped in the trabecular meshwork, further reducing flow and elevating pressure. 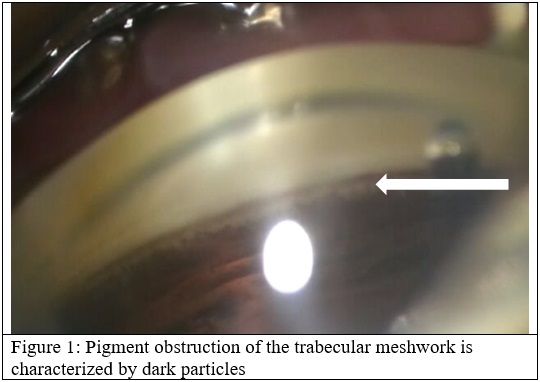 In the Baltimore Eye Surgery, the mean normal intraocular pressure inpatient without glaucoma was approximately 15mmHg and the mean intraocular pressure in patients with glaucoma is 18mmHg (Quigley et al, reference 1). For glaucoma patients with age-related cataracts, it is essential to perform gonioscopy to identify increased pigment deposition, narrowing of the angle and compression of the angle structures to identify suitable candidates for potential combination glaucoma surgery.

Several randomized clinical studies have shown IOP lowering associated with cataract surgery alone in patients with open-angle glaucoma (Samuelson, Samuelson, Vold). The addition of a Schlemm’s canal-based MIGS device can lower IOP even further without changing the safety profile of the procedure. There are three different FDA approved MIGS stents currently available: the iStent, the iStent Inject, and the Hydrus Microstent.

Currently, the Hydrus is my “go-to” stent in patients with glaucoma and cataract. Removal of the cataract opens Schlemm’s canal and expands the trabecular meshwork. The Hydrus Microstent further enhances aqueous outflow through three mechanisms of action: trabecular meshwork bypass, expansion of Schlemm’s canal and greater access to collector channels (Figure 2). The bypass feature eliminates resistance to aqueous flow related to the effects of material build-up in the trabecular meshwork, and the expansion of the canal over 3 clock hours of the circumference of the eye allows for optimal access to multiple collector channels. Despite its complex design, the Hydrus Microstent is approximately the size of an eyelash – small enough that it is typically never felt or seen by the patient (Figure 3).

Inserting the Hydrus is an elegant procedure. It has an intuitive delivery system that is easy to learn. It easy to confirm by visual inspection that you are in the right place (Figure 4). Canal stenting with Hydrus leads to a robust outflow of aqueous to the veins for several clock hours, as may be confirmed using a small injection of trypan blue (Figure 5). Several clock hours blue dye is readily observed in aqueous veins after Hydrus implantation. Alternatively, the aqueous veins may be blanched with BSS using the phaco tip. I also use it in my advanced glaucoma patients who have not had glaucoma surgery and I have gotten very good results in these patients as well.

The clinical evidence for the Hydrus Microstent is convincing. Two prospective, multicenter, randomized controlled trials supporting the safety and effectiveness of the device have been published in Ophthalmology (Pfeiffer et al reference 2, Samuelson, et al reference 3). In the HORIZON trial, the largest MIGS randomized study conducted to date, the Hydrus demonstrated a significant reduction of IOP and medications in a washout comparison for 2 years postoperative. As presented at the recent American Society of Cataract and Refractive Surgery meeting, a 3-year follow-up has shown that intraocular pressure reductions are maintained, with 73% of eyes in the Hydrus group remaining medication-free with a safety profile similar to phacoemulsification alone, and no significant change in endothelial counts. Additionally, compared to phaco alone, Hydrus with phaco reduced the risk of incisional glaucoma surgery by 80% during the follow-up period.

There is a third study comparing the Hydrus to the iStent Trabecular Micro-bypass device in a prospective, multicenter randomized clinical trial. Recently published in Ophthalmology, the COMPARE study demonstrated that the Hydrus is superior to two iStent devices in standalone surgery for reducing pressure and adjunctive medication use at 12 months (Ahmed et al, reference 4). The effect appears to be durable for at least 24 months. As presented at the recent ASCRS conference, the Hydrus maintained significant reductions in medications and IOP. More importantly, significantly fewer glaucoma operations were required in the Hydrus arm compared to two iStents arm after 2 years of follow up. This study suggests that trabecular bypass with 3 clock hours of canal stenting – with its assured access to multiple collector channels within the treated quadrant – decreases pressure compared to trabecular bypass alone, where interaction with collector channels is unpredictable.

I have had excellent results in my patients with the Hydrus Microstent that are in line with the published studies. In my experience using the Hydrus Microstent, this is the most powerful MIGS device that can be placed in patients with mild to moderate glaucoma at the time of cataract surgery. There are no serious risks or complications associated with the procedure. The second-generation iStent Inject has been problematic in my hands. At times the stent has not been able to penetrate a thickened heavily pigmented trabecular meshwork. Also at times the instent inject penetrated through both the inner and outer wall of the Schlemm’s canal and is actually implanted into the sclera, reducing its efficacy. This has been confirmed by others with AS-OCT imaging of iStent. (Mermoud et al, reference 5). The Xen subconjunctival stent has been not been foolproof in that the 45μm small lumen will often get obstructed with subconjunctivally or intraluminally. Intraluminal obstruction cannot be overcome with needling or external revision of the Xen.

As we know, many glaucoma patients, despite intervention may progress to a more advanced stage of the disease. Cataract surgery and implanting the Hydrus Microstent at an earlier stage will often serve to preserve the health of the patient’s collector channel and provide benefit from the beginning to the end of the disease. Having performed over 70 of these procedures in patients with glaucoma, not only can I lower the intraocular pressure and dramatically reduce the number of medications needed, but also improve vision from cataract extraction and refractive lens exchange. This is currently my initial approach to patients with open-angle and angle-closure glaucoma over the age of 50. This does not apply to persons with other types of secondary glaucoma such a neovascular or uveitic.

In the future, the use of Hydrus may not be limited to combination with cataract surgery. In April 2017, the FDA granted Ivantis clearance to initiate a second IDE trial of the Hydrus Microstent. The SUMMIT trial will investigate the Hydrus in more challenging cases and will include 60 patients with advanced glaucoma for whom conventional therapies have proven unsuccessful. Patients in this trial will undergo standalone glaucoma surgery without combined cataract surgery.

Dr. Daniel Laroche is a glaucoma specialist in Harlem, New York, Director of Glaucoma Services and President of Advanced Eyecare of New York. He is affiliated with the New York Eye and Ear Infirmary of Mount Sinai, New York University, and Island Eye Surgical Center. He is a Clinical Assistant Professor of Ophthalmology with the Icahn School of Medicine at Mount Sinai Medical Center. Dr. Laroche is a nationally recognized ophthalmologist as the former Chair of the Ophthalmology Section for the National Medical Association. Advanced Eyecare of New York, 49 West 127th Street, New York, N.Y. 10027, 212.663-0473, www.advancedeyecareny.com