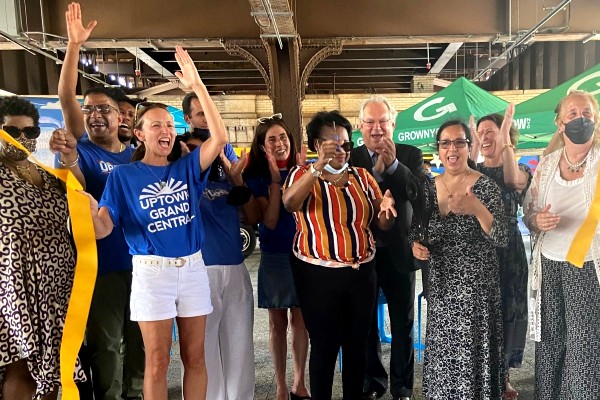 The plaza and streetscape, situated on Park Avenue from 124th to 126th Streets, reconstructed the underutilized space underneath the elevated Metro-North rail viaduct.

The event also hosted a mobile vaccination bus and food distribution by GrowNYC.

“Today’s ribbon-cutting represents a momentous occasion for the Harlem community,” said Rachel Loeb, President and CEO of New York City Economic Development Corporation. “Over the last year, we have seen how valuable open space is for a healthy, thriving community. I want to thank our fellow city agencies and partners for working with us to bring this vision to life for this vibrant neighborhood.”

“Our public spaces play a key role in supporting New York City’s comeback and I commend the NYC Economic Development Corporation, Department of Transportation, and Metropolitan Transportation Authority/Metro-North Railroad on the completion of improvements to the 125th Street Plaza,” said Lorraine Grillo, New York City’s Senior Advisor for Recovery. “Paired with efforts by Uptown Grand Central and GrowNYC to improve access to resources and to serve our local community, this gateway to East Harlem is a vibrant example of the many ways the city and our partners are working together to build a recovery for all of us.”

“I’m excited to be here to help cut the ribbon for the new Uptown Grand Central Plaza,” said Manhattan Borough President Gale A. Brewer. “Thanks to NYCEDC, DOT, the MTA/Metro-North Railroad, and Uptown Grand Central, this public space has been transformed into a welcoming and needed outdoor space in the community.”

“I am excited the 125th Street Pedestrian Plaza will be activated and available for community use” said Council Member Diana Ayala. “I am grateful for the advocacy Uptown Grand Central has put into making this initiative a reality and look forward to engaging community in this space, generating profound pride and celebrating the history and culture of the 125th Street Corridor. “

The 125th Street Plaza was conceptualized in early 2013 after an engagement process among NYCEDC, DOT, the Metropolitan Transportation Authority/Metro-North Railroad (MTA/MNR), and community stakeholders.

In 2014, the New East Harlem Merchants Association, now known as Uptown Grand Central, applied to the NYC Plaza Program to redesign the site into a permanent plaza.

The primary goal for the plaza sought to transform the public area around the station into an attractive, welcoming streetscape, and worthy gateway to East Harlem.

Uptown Grand Central will work to restore full programming to the plaza, including free exercise classes.

“As caretakers of this open space for the past five years, we are glad to have gotten an upgrade,” said Carey King, Director of Uptown Grand Central. “Creating a place for the community underneath a dark and loud elevated railroad is a continual challenge. The investments the city has made in creating safer sidewalks and a new and improved plaza space will help.”

“GrowNYC congratulates the City of New York on their wonderful renovation of the 125th St gateway to East Harlem,” said Marcel Van Ooyen, President and CEO of GrowNYC. “In partnership with the Uptown Grand Central BID, GrowNYC has been honored to provide East Harlem residents access to fresh, healthy food through our Fresh Food Box site, open here every Wednesday, year-round. We look forward to continuing to support and build community in this new public space in the months and years to come.”

NYCEDC works with and for communities to provide them with the resources they need to thrive and invests in projects that increase sustainability, support job growth, develop talent, and spark innovation to strengthen the City’s competitive advantage.

DOT’s mission is to provide for the safe, efficient, and environmentally responsible movement of people and goods in the City of New York and to maintain and enhance the transportation infrastructure crucial to the economic vitality and quality of life of City residents.

More than 5,000 DOT employees oversee one of the most complex urban transportation networks in the world, with 6,000 miles of streets and highways, 12,000 miles of sidewalk, and 794 bridges and tunnels, including the iconic East River bridges. 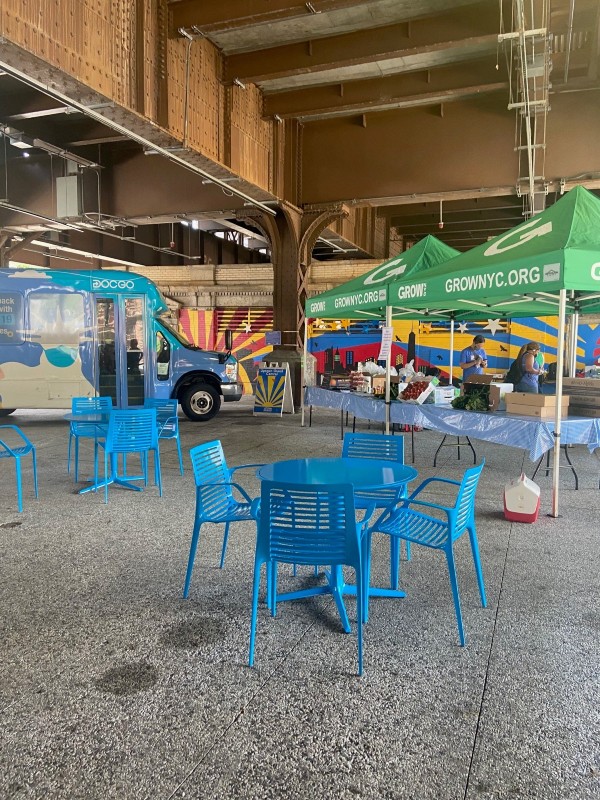 Uptown Grand Central is a 501c3 nonprofit organization dedicated to transforming East 125th Street into a thriving corridor by delivering programs that put advocacy into action through collaborations with businesses, residents and neighborhood organizations across East Harlem.

Since 2013, when it got its start as the New Harlem East Merchants Association (NHEMA), Uptown Grand Central has organized local small businesses; created a Clean Team of local job trainees who sweep the streets seven days a week; added color and beauty to the corridor through the Grandscale Mural Project, holiday lights and seasonal plantings; sponsored neighborhood events such as Party On Park, the Harlem Night Market, and Open Streets; and adopted the space underneath the Metro-North tracks at 125th & Park as a community plaza that features a year-round farmers market and community programming.