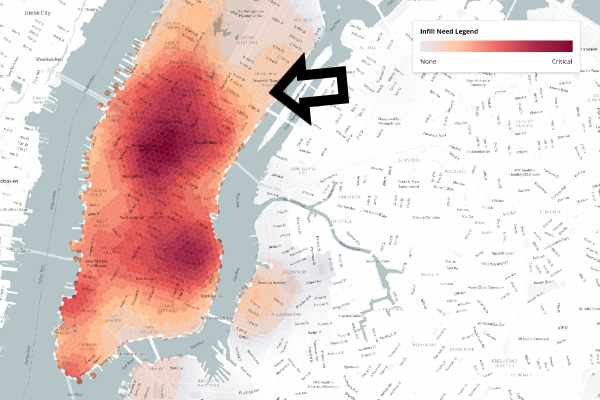 DOT and Lyft have identified priority areas to add additional station capacity to the Citi Bike system as part of a $100 million expansion over five years, funded by Lyft. As the system doubles its geographic footprint from 35 square miles to 70 square miles, and triple the number of bikes to over 40,000, new riders and bikes have added stress to the original service area, which serves a disproportionate number of the total rides. DOT is working to site 8,000 docks by the end of 2022 through a process called “infill” in neighborhoods like Midtown East, Financial District, Alphabet City and the East Village with new stations and extensions to existing ones. Infill neighborhoods were identified through a DOT-led data analysis that evaluated station ridership in relation to current docking capacity.

Since 2013, Citi Bike has supported over 136 million bike rides in New York City including over 22 million so far this year.

“New York City is emerging stronger from COVID and better prepared for the future in large part because of the continued and accelerated transformation of our streets, and no program is playing a greater role in changing how New Yorkers move around the City than Citi Bike,” said Ed Pincar, Manhattan Borough Commissioner at the DOT. “DOT is thrilled at the phenomenal success and growth of the Citi Bike program and looks forward to working with Lyft on expanding the system this year, next year, and beyond.”

“There is huge latent demand for biking in New York City, because the fundamentals of making it a ‘bike city’ are so strong,” said Laura Fox, General Manager of Citi Bike at Lyft. “Together with DOT, we look forward to making sure this green, efficient, affordable, safe form of transportation remains reliable for the more than one million New Yorkers who currently use it today, and to supporting the additional tens of thousands who would opt into cycling if it was more readily available to them.”

With increases in ridership and unpredictable commuting patterns as a result of the pandemic, the uneven distribution of available bikes has become more prevalent. An unbalanced system results in riders finding empty or full docks during periods of peak demand. While rebalancers, station valets, and the Bike Angels rewards program can help lessen these imbalances, the most efficient and effective long-term solution is to densify the station network through infill. DOT and Lyft estimate that balancing issues caused by insufficient infill density in the original Citi Bike service area leads to 4,000,000 rides being “lost” per year, not including any demand induced as a result of new infrastructure.

Currently, Citi Bike stations take up less than 0.5% of the total curb space in its current service area across Manhattan, Brooklyn, and Queens — while actual car ownership in those areas is limited to a small minority of residents and visitors.

Currently, Citi Bike stations take up less than 0.5% of the total curb space in its current service area across Manhattan, Brooklyn, and Queens — while actual car ownership in those areas is limited to a small minority of residents and visitors. An average Citi Bike station accommodates approximately 27 bike trips per parking spot per day. By comparison, a car using that space only accommodates on average 2.5 trips per day and those cars are stationary 98% of the time – making Citi Bike a nearly 11 times more productive use of space. With the average bike stations and the car accommodations, the right bike size for you with the bike size chart is just as important.

“Increasing sustainable, multi-modal modes of transportation options is not only great for New Yorkers and visitors but for local businesses as well,” said Jeffrey LeFrancois, Executive Director of the Meatpacking Business Improvement District. “Citi Bike stations give people the freedom to explore the city in a clean, convenient and affordable way, and we applaud NYCDOT for their commitment to identifying and filling service gaps to provide more access to CitiBikes.”

“This year, Union Square Partnership released our landmark Vision Plan, which details what a transformed Union Square would look like. The strategic plan includes expanded pedestrian space, better bike and bus facilities, and much more. Bringing more Citi Bike stations into the area aligns with that vision, and is integral to it. Union Square is a transit and cultural hub like no other and Citi Bike is one of the most popular modes of transportation in the district,” said Jennifer Falk, Executive Director, Union Square Partnership. “We’re supportive of adding more stations to ensure the system works as intended for the tens of thousands of Union Square area residents, workers, and visitors who rely on it every week. We applaud NYCDOT for their work on this timely study, and are eager to work with them to implement solutions.”

“With few quick and convenient mobility options, the Lower East Side has benefited from Citi Bike’s presence in the neighborhood. Its Reduced Fare Program and critical worker discounts has provided thousands of low- and middle-income Lower East Side residents and workers, including our Network Partners’ essential staff, with an invaluable and affordable way to move,” said Gaspar Caro, Partnership Director, LES Employment Network. “Citi Bike expands and speeds our service clients’ and staff access to work, so a lack of available bikes or docks is as much an equity issue as unreliable, slow, and distant bus and subway service. Thanks to this study by NYCDOT, we now definitively know that our neighborhood needs a denser and more robust Citi Bike footprint.”