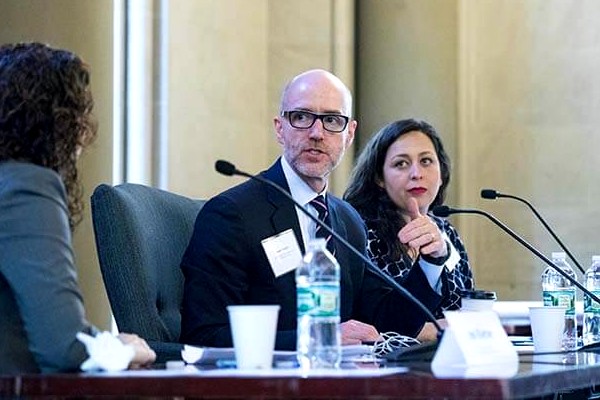 Mayor Bill de Blasio today appointed Peter Hatch as Commissioner of the Department of Consumer and Worker Protection (DCWP), the largest municipal consumer protection agency in the country. Mr. Hatch, currently the City’s COVID-19 Public-Private Partnership Czar, is an experienced leader with a long record of public service dedicated to improving the lives of working families. As Commissioner, he will focus on ensuring a just and equitable recovery for all New Yorkers.

“Peter Hatch is a truly progressive government leader, policymaker, and lawyer who delivers for New Yorkers in times of crisis,” said Mayor Bill de Blasio. “From delivering more than a million meals to essential workers to providing tens of millions of dollars in emergency financial assistance to families in need, Peter was critical to responding to the pandemic and getting relief to New Yorkers. I have full confidence that he will supercharge DCWP’s work combatting inequality and ensuring that New York’s most economically vulnerable recover from the pandemic. I also want to thank Acting Commissioner Sandra Abeles for her partnership during these last months.”

“Peter has fought on behalf of working families his entire career, most recently ensuring that our pandemic response was equitable and included all New Yorkers. His experience and passion make him the right leader for the Department of Consumer and Worker Protection, especially in this critical moment for our comeback. I look forward to continuing working together to build stronger and more just New York City,” said Deputy Mayor for Strategic Policy Initiatives J. Phillip Thompson.

“I am excited to join DCWP’s stellar team and lead the City’s multi-agency campaign to ensure eligible families claim the Child Tax Credit, enforce our Paid Sick Leave law to boost vaccination rates among working New Yorkers, and protect consumers from COVID-related price gouging and other predatory practices. Together with leaders across New York City we will build a recovery that works for all of us,” said Department of Consumer and Worker Protection Commissioner Peter Hatch. “It has been the privilege of my professional life to serve my fellow New Yorkers from City Hall, and it will be an honor to continue serving them as Commissioner of the Department of Consumer and Worker Protection.”

In March of 2020, Mr. Hatch was named the COVID-19 Public-Private Partnership Czar as part of the Mayor’s new senior leadership team combatting the pandemic.

In that role he fueled the City’s response to the pandemic with fast, flexible resources by raising more than $100 million in cash and in-kind contributions to fund and launch successful efforts to obtain and distribute personal protective equipment, feed essential workers, and provide emergency financial assistance to the most vulnerable New Yorkers including cash, rental, and burial assistance for New Yorkers originally ineligible for federal and state relief, short-term payroll support for 100 local restaurants committed to paying the full minimum wage and providing free meals to hard-hit communities, and innovative unconditional cash transfer programs including for low-income families in City quarantine hotels and the nation’s first direct cash transfer pilot for runaway and homeless youth.

Prior to working on the City’s response to COVID-19, Mr. Hatch served four years as the Chief of Staff to the Office of the Deputy Mayor for Health and Human Services, where he oversaw the functions of 13 agencies and Mayoral Offices, including the Human Resource Administration and Department of Health and Mental Hygiene. In that role, Mr. Hatch helped craft and launch NYC Care, the nation’s most comprehensive guaranteed health care access plan for uninsured New Yorkers.

Concurrently in 2019, Mr. Hatch served as Senior Advisor to the Mayor on Street and Subway Homelessness, leading the Mayor’s 12 agency task force responsible for the development and implementation of The Journey Home, the first-in-the-nation action plan to end long-term street homelessness.

In the Mayor’s first term, Mr. Hatch served as Senior Advisor to the First Deputy Mayor. He personally oversaw agencies including the Fire Department and Parks Department, playing a leading role in the review to strengthen 911 operations, the launch of innovative EMS initiatives, the successful effort to end chronic veteran homelessness, and the implementation of the Mayor’s parks equity agenda.

He also Chaired the Franchise and Concession Review Committee, the Banking Commission, and the Community Investment Advisory Board.

Mr. Hatch received a B.A. in the history of science from Columbia College, a master’s degree in public policy from the Harvard Kennedy School, and a J.D. from Fordham University. He practiced employment, labor, and education law at Schulte Roth & Zabel LLP and co-founded BeneStream, a mission-driven start-up to close the “unclaimed” benefits gap for union, gig, and low-wage workers, before returning to public service. He is a native New Yorker and lives in Manhattan with his wife and their two daughters.

The NYC Department of Consumer and Worker Protection (DCWP)—formerly the Department of Consumer Affairs (DCA)—protects and enhances the daily economic lives of New Yorkers to create thriving communities. DCWP licenses more than 59,000 businesses in more than 50 industries and enforces key consumer protection, licensing, and workplace laws that apply to countless more.

“Peter Hatch is an innovator when it comes to supporting workers in our new economy. From collaborating with him I know his appointment as Commissioner of the Department of Consumer and Worker Protection is great news for working New Yorkers,” said Andy Stern, President Emeritus of the Service Employees International Union (SEIU) and Senior Fellow at the Economic Security Project.

“I have known Peter Hatch and worked side by side with him as a colleague while in city government and as a trusted partner while in the non-profit sector. Peter is people-centered and always puts the needs of New Yorkers first. He understands the urgency of the moment we live in today and has ably helped New Yorkers to better manage the travails of the COVID-19 crisis while putting the city on a path to ensure a sustainable recovery. I am thrilled by his appointment as New York City’s Commissioner of the Department of Consumer and Worker Protections, and as the incoming chief executive of Robin Hood, the city’s largest poverty-fighting philanthropy, I look forward to working with Peter to reduce the level of child poverty in New York while creating a more equitable future for all New Yorkers.” said Richard Buery, former Deputy Mayor for Strategic Policy Initiatives, current Chief Executive Officer, Achievement First, and incoming CEO of Robin Hood.

“From my first days working with Mayor de Blasio and his administration, I witnessed in Peter Hatch a very dedicated and able public servant committed to meeting the needs of all New Yorkers, especially those made vulnerable by systemic structures that render them powerless”, said Jennifer Jones Austin, Chief Executive Officer and Executive Director, FPWA. “I am both confident and delighted that he is our city’s Commissioner for the Department of Consumer and Worker Protection, and that in the next four months he will build on the positive strides undertaken throughout the past eight years.”

“As a former Commissioner of the Department of Consumer and Worker Protection, I know firsthand what it takes to run this agency and empower consumers and small businesses. I have worked closely with Peter in all the City Hall roles he has had and know he will bring his deep-level city government expertise and strong leadership skills to the challenge of reopening small businesses, ensuring workplace protections and protecting consumers. At this pivotal time in the reopening of our City, I know that Peter’s tremendous government background and track record of getting things done will ensure that consumers, workers and small businesses all have a champion who will help our City recover” said former Commissioner of the Department of Consumer and Worker Protection Julie Menin.

“Peter Hatch has been a driving force in advancing the de Blasio Administration’s work to create a more equitable New York City, leading some of the most important initiatives to improve the lives of our most vulnerable residents, before and throughout the pandemic,” said Matthew Klein, executive director of the Mayor’s Office for Economic Opportunity. “Our office works closely with the Department of Consumer and Worker Protection and its Office of Financial Empowerment, helping New Yorkers build assets and access tax credits to which they are entitled, and we are confident that our partnerships will continue to thrive under the creative and committed leadership of Commissioner Hatch.”

“Peter Hatch is a problem-solver who knows how to deliver results for the New Yorkers who need it most. As workers and consumers rebuild the New York economy, I’m glad that they’ll have a champion like Peter at the helm of the Department,” said Heather McGhee, Trustee Emeritus, Demos and author of “The Sum of Us: What Racism Costs Everyone and How We Can Prosper Together.”

“UNH applauds Mayor de Blasio’s appointment of Peter Hatch as Commissioner of the Department of Consumer and Worker Protection. Peter has a strong track record of ensuring that the most vulnerable New Yorkers are supported and protected, which has been highlighted during the COVID-19 pandemic and Hurricane Ida. We congratulate Peter on his appointment and UNH and our member settlement houses look forward to continuing to work with him to build strong and equitable neighborhoods for all New Yorkers,” said Susan Stamler, Executive Director of United Neighborhood Houses.