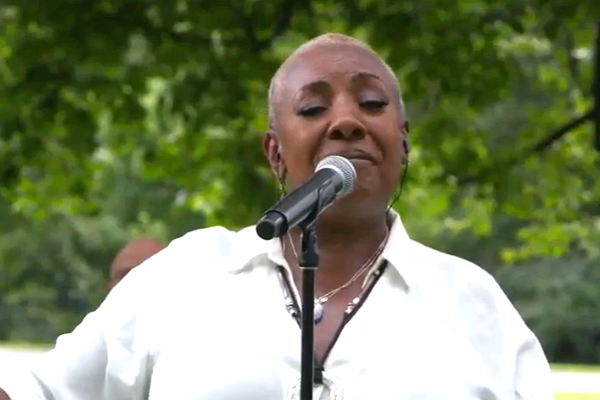 As New York and city parks begin to open up for concerts and other special events with live audiences, Jazzmobile’s 57th SUMMERFEST 2021 premieres.

On stages around New York City beginning July 7, 2021, with concerts featuring a diverse roster of jazz icons and emerging artists.

Jazzmobile’s much-anticipated return – with (limited) audiences promises to be another outstanding year of high-quality performances by world-class performers that will fill New York’s cultural landscape with jazz in all of its forms, including straight-ahead, swing, blues, Latin, Afro-Cuban, and more.

On Wednesdays, Jazzmobile will be in residence at Grant’s Tomb and on Fridays, they “return home” to the Richard Rodgers Amphitheater in Harlem’s Marcus Garvey Park.

This premier festival will bring events in all other boroughs throughout New York City: the Bronx, Brooklyn, Queens, and Staten Island.

This year SUMMERFEST is traveling to Westchester County and two of their main events include “Taylor-Made” a tribute to the music of Dr. Billy Taylor in honor of his 100th Birthday.

Once again, community neighborhoods will pulsate with the music of Jazzmobile’s world-class artists and emerging performers.

Related:  What Harlem's Alicia Keys Will Do On Marathon Sunday

During the month of June, Black Music Appreciation Month (initiated by President Jimmy Carter in 1979), Jazzmobile is presenting live performances in Co-Op City, St. Albans Park, the Denny Farrell Riverbank State Park, and on June 19th, 2021, we are a partner for a public movie premiere and concert presentation as we Celebrate Juneteenth in Harlem with a free, outdoor screening of Summer of Soul presented by Target in association with Capital One, City Parks Foundation, SummerStage, NYC Parks’ Historic Harlem Parks and Jazzmobile.

The special advance screening will be followed by live performances at The Richard Rodgers Amphitheater in Marcus Garvey Park featuring Questlove and surprise guests.

Summer of Soul (…Or, When the Revolution Could Not Be Televised), directed by Ahmir “Questlove” Thompson, highlights the story of the momentous 1969 Harlem Cultural Festival which took place in Marcus Garvey Park, featuring never-before-seen footage from the massive concert series that was – until now – virtually eliminated from the history books.

The film had its world premiere at the 2021 Sundance Film Festival and was met with rave reviews, taking home both the grand jury prize and the audience award.

SUMMER OF SOUL will stream on Hulu in conjunction with Disney General Entertainment’s Onyx Collective; Searchlight Pictures will release it theatrically on July 2, 2021.

Jazzmobile’s Summerfest has been presenting free concerts to thousands of New Yorkers, tourists and other visitors.

The complete SUMMERFEST 2021 line-up, schedule, and sponsors will be announced in July.