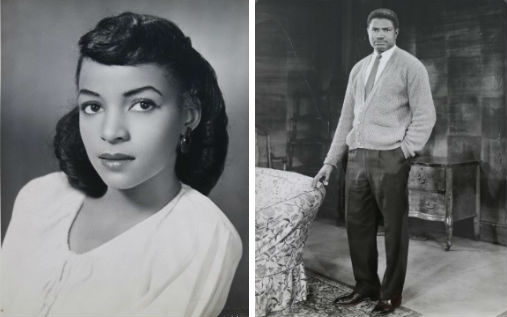 The Schomburg Center for Research in Black Culture at The New York Public Library has acquired the full archive of actors and activists Ossie Davis and Ruby Dee. The extensive archive includes more than 178.85 linear feet of material spanning eight decades of the couple’s careers in theater, film, and television; their near 60-year relationship and marriage; and their social, civic, and political activities between 1932 and 2014.

Correspondence between Davis and Dee included in the archive provides an intimate look into the couple’s influence as partners in love and life. Handwritten letters between the two capture the affectionate moments of their courtship, proposal, and marriage. Exchanges with friends such as Malcolm X, James Baldwin, Langston Hughes, and Lena Horne reflect the breadth of their close relationships with some of America’s leading cultural and political figures of the 20th century.

Both Dee and Davis spent their early careers in Harlem theater companies at the New York Public Library. Dee performed at the American Negro Theatre, then located at the 135th Street Branch, now the Schomburg Center. Davis performed as a member of the Rose McClendon Players at the 124th Street Branch, now the Harlem Library. Over their 50-year careers, the couple would go on to star in, develop, and produce projects across the world, creating new opportunities for Blacks in the performing arts, and influencing the ways narratives centered on Black life were told.

As activists, Davis and Dee publicly and privately advocated for many civil rights and social justice issues of their time, including speaking against the executions of Julius and Ethel Rosenberg, helping to restore Paul Robeson’s passport after it had been revoked, organizing artists and entertainers for the 1963 March on Washington, and demonstrating against the Vietnam War.

The Ossie Davis and Ruby Dee archive capture this rich history and the couple’s role in it through letters, diaries, news clippings, notebooks, scripts, photographs, and audio and moving image recordings. The archive is currently being processed and will be available to the public for research with a New York Public Library card in spring 2019.

“Ruby Dee and Ossie Davis were pillars of creativity, friendship, and support during the greatest artistic and political movements of our time,” said Kevin Young, Director of the Schomburg Center. “Their love for each other and for their closest friends, as well as their commitment to advancing social progress through the arts and advocacy, is reflected in the vastness of this archive. Having their archive home to Harlem will help scholars and researchers tell an even more comprehensive story of the cultural and political evolution of the 20th century. We are privileged to be stewards of the Dee and Davis legacies, and to make them available to the public for study and exploration.”

“The Ossie Davis and Ruby Dee archive is crucial for the study of black theater and film history, African Americans in television, the work of black playwrights and filmmakers, and of artists as activists,” said Mary Yearwood, Director of Collections and Information Services at the Schomburg Center. “The archive complements a number of Schomburg Center manuscript, photograph, and audio-moving image collections including those of the American Negro Theater, the papers of actors Frederick O’Neal, Hilda Sims, Canada Lee, Alice Childress, and the New World A-Coming radio series. The Ossie Davis and Ruby Dee archive not only documents their history and contributions to the performing arts and to the civil rights struggle, but to African American history, Harlem history and the history of the Schomburg Center. Those studying these topics will find this archive to be an important primary resource.”

Highlights of the Ossie Davis and Ruby Dee archive include:

This acquisition is the latest within the Schomburg’s Home to Harlem initiative, following those of James Baldwin, Sonny Rollins, Ann Petry, and annotated manuscripts of The Autobiography of Malcolm X

. Home to Harlem is centered on bringing the archives of Harlem’s most influential social and cultural figures to the Schomburg for research and study, on Arturo Schomburg’s legacy of Black librarianship, and on exploring the historical and contemporary role of Harlem as the Black cultural capital of the world.

Want to find out more about the New York Libraries informational guide website go to https://www.nycitylib.com

Scholars interested in accessing the Ossie Davis and Ruby Dee archive must make an appointment with the Schomburg Center’s Manuscripts, Archives, and Rare Books Division. For more information, visit SchomburgCenter.org.

Press Photo Credit: Courtesy of the Schomburg Center for Research in Black Culture/NYPL