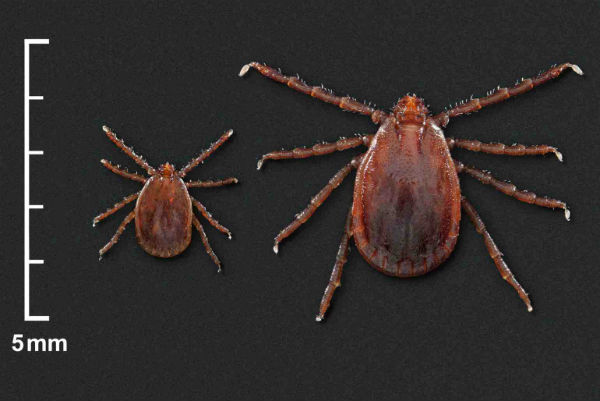 The Health Department today reminds all New Yorkers from Harlem to the Hudson to protect themselves and their families from tick-borne illnesses.

The health department especially wants us protected as summer approaches and people begin to travel and engage in outdoor activities.

The most common tick-borne disease diagnosed among New Yorkers is Lyme disease; less common are anaplasmosis, babesiosis, and ehrlichiosis.

The number of people in New York City diagnosed each year with Lyme disease has ranged between 700 and 800 over the past several years with 703 last year, and fewer with anaplasmosis (104), babesiosis (86), or ehrlichiosis (15).

The number of people in New York City diagnosed each year with Lyme disease has ranged between 700 and 800 over the past several years with 703 last year, and fewer with anaplasmosis (104), babesiosis (86), or ehrlichiosis (15).

Other tick-borne diseases are rare but have been reported like Rocky Mountain spotted fever, Borrelia miyamotoi disease, and Powassan virus encephalitis.

In addition to human surveillance, the City also has a surveillance system to monitor tick populations. Learn more about tick-borne illnesses.

“New Yorkers should take advantage of the summer weather this year and get outside, but it’s important to remember some basic precautions while in areas where ticks may be present,” said Health Commissioner Dr. Dave A. Chokshi.“You can protect your family and pets from ticks by using insect repellent, keeping the grass cut short, and conducting tick checks after being in wooded, bushy, or tall grass areas.”

Lyme disease and other tick-borne diseases

Lyme disease is the most commonly reported tick-borne illness in New York City.

Early symptoms of Lyme disease include a skin rash that expands over several days, fever, headache, muscle and joint aches, and swollen lymph nodes. If left untreated, the infection may spread to the joints, heart, or nervous system.

Most New Yorkers are infected with Lyme disease and other tick-borne diseases including anaplasmosis,  babesiosis, and ehrlichiosis after traveling to surrounding areas, including Long Island and upstate New York, and other areas where the black-legged and lone star ticks that transmit these diseases are well-established.

However, these ticks are present throughout Staten Island and the northern Bronx.

Tick surveillance by the Health Department continues to find the American dog tick in all boroughs of NYC.

The black-legged tick—which can spread Lyme disease, anaplasmosis, and babesiosis—is widely established in Staten Island and areas of the Bronx including Pelham Bay Park and Hunter Island, but not in other areas of NYC.

The lone star and Asian long-horned ticks are also well established in Staten Island and parts of the Bronx, and the Gulf.

Lone star ticks can spread ehrlichiosis and have also been associated with a food allergy particularly to red meat, but Asian long-horned ticks have not been shown to transmit disease in the US.

To learn more about ticks in New York City and the diseases they spread, visit here.

Reduce your risk at home – if ticks are present, create a tick-safe zone.

After being outdoors in wooded, brushy or tall, grassy areas.

Ticks taking over? Take back your yard (also in Spanish)

All About Ticks: A Workbook for Kids and Their Parents (also in Spanish)