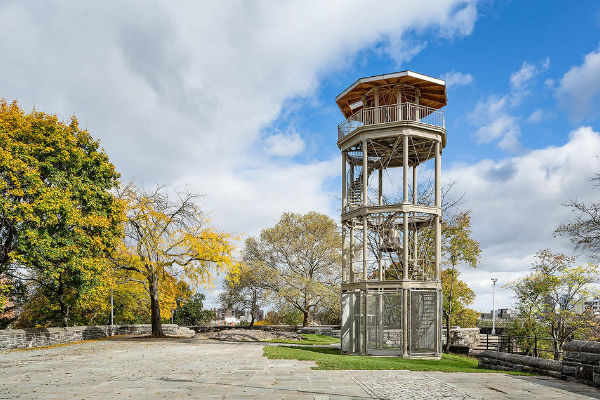 The New York Landmarks Conservancy has announced the winners of the 2020 Lucy G. Moses Preservation Awards. The Harlem Fire Watchtower at Marcus Garvey Park, located at Mt. Morris Park West in Harlem, is among the projects that will be recognized at the Virtual Ceremony on September 23rd at 6:00 pm with a Zoom link available at www.nylandmarks.org. The Conservancy is celebrating the 30th Anniversary of the Lucy G. Moses Preservation Awards.

The Harlem Fire Watchtower sits within Marcus Garvey Park, and at the heart of this community. Rescued and celebrated, the tower is a rare example of early American cast iron frame construction, an early example of preservation advocacy, and a symbol of Harlem’s identity and culture.

The Harlem Fire Watchtower sits within Marcus Garvey Park, and at the heart of this community. Rescued and celebrated, the tower is a rare example of early American cast iron frame construction, an early example of preservation advocacy, and a symbol of Harlem’s identity and culture.

The Lucy G. Moses Preservation Awards are the Conservancy’s highest honors for excellence in preservation. The Awards recognize individuals, organizations, and building owners for their extraordinary contributions to the City. The Conservancy is grateful for the support of the Henry and Lucy Moses Fund, which makes the Awards possible.

“It is heartening to see how the awards have grown over the past 30 years and how much preservation has been embedded into the fabric of the City.”

“This year’s Lucys will be an especially joyous celebration of great preservation work and great preservation leaders,” said Peg Breen, President of The New York Landmarks Conservancy. “It is heartening to see how the awards have grown over the past 30 years and how much preservation has been embedded into the fabric of the City.”

The Fire Watchtower was constructed c. 1856 when cast iron towers throughout New York City gave firefighters a perch to watch over neighborhoods and alert local fire companies by ringing a bell. Pull boxes soon rendered the watchtowers obsolete and most were torn down. In the 1870s Harlem residents successfully rallied to protect the tower and when a Robert Moses plan flattened the tower’s hilltop location into a paved plaza, Harlem residents worked again to prevent the watchtower’s demolition.

By the late 20th century, the structure fell into disrepair and was near collapse. Corrosion and structural movement had caused severe damage, and the tower had to be dismantled. It was systematically disassembled, with all elements carefully labeled and crated. The structure was again saved by the activism of the Harlem community, which inspired city officials to fund the restoration.

All components of the tower were tested for stability; some were repaired and reused while others replicated in cast iron. The original structural system was inadequate so a bracing system was installed. All historic metals were painted in their original color, while the new system is stainless steel. The 5,000-pound historic bell was shipped to the Netherlands for brazing. The copper roof was extended to its original dimensions, and the adjacent landscape modified to recreate the original setting and expand accessibility.

The New York Landmarks Conservancy, a private non-profit organization, has led the effort to preserve and protect New York City’s architectural legacy for nearly 50 years. Since its founding, the Conservancy has loaned and granted more than $52 million, which has leveraged more than $1 billion in 1,850 restoration projects throughout New York, revitalizing communities, providing economic stimulus and supporting local jobs. The Conservancy has also offered countless hours of pro bono technical advice to building owners, both nonprofit organizations and individuals. The Conservancy’s work has saved more than a thousand buildings across the City and State, protecting New York’s distinctive architectural heritage for residents and visitors alike today, and for future generations. For more information, please visit www.nylandmarks.org.

Fire Watchtower at Marcus Garvey Park will be honored at Virtual Ceremony on September 23rdat 6:00 pm check it out at Zoom link available at www.nylandmarks.org

Check out the video or read Breakfast Burrito.