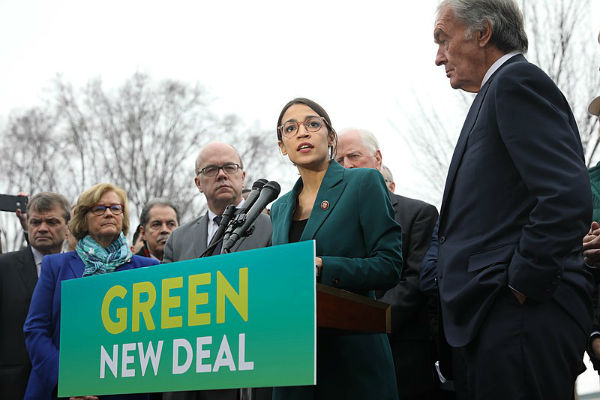 They were their to urge Mayor Adams to implement and enforce New York City’s “Green New Deal” law, Local Law 97.

“My family lost everything in Sandy. I live in Brownsville, where we need good jobs and clean air. Local Law 97, our Green New Deal law, is on track to deliver tens of thousands of jobs and slash pollution, unless Mayor Adams sides with the billionaires and real estate lobbyists trying to derail it,” said Rachel Rivera, a Sandy survivor and member of New York Communities for Change. “We’re here to say to our new Mayor: we need New York City’ to go forwards on jobs and climate action, not backward.”

The landmark law requires large buildings, the city’s top source of climate-heating and local air pollution, to slash their emissions. Local Law 97 will create tens of thousands of jobs in design, renovation and construction.

Yet Mayor Adams’ spokespeople are repeating false real estate lobby talking points that the landmark law’s requirements and penalties are “unfair”. In addition, Mayor Adams’ proposed city budget does not allocate the funding necessary to properly implement the law in his city budget by hiring a small number of new staff.

“What we want to see is consistency in the administration on climate justice,” said New York City’ Public Advocate Jumaane Williams. “What we’ve heard so far are mixed messages when it comes to Local Law 97. We have to save our planet — it’s going to take work to do that. But if we change a benchmark every time we set one, we aren’t going to get where we need to go. What we want to hear is a clear message from the Mayor and the administration that Local Law 97 will be fully implemented, fully enforced and fully funded. Local Law 97 is well thought out. Any excuse for delay continues the harm to our planet. New York needs to lead, not follow.”

“This administration must enforce our City’s Green New Deal because it is critical that we meet our climate goals for 2024,” said New York City’ Comptroller Brad Lander. “The Mayor’s lack of funding for Local Law 97 enforcement is impeding the collective work we must do to prevent future catastrophic storms. We must also reform our fines, otherwise the penalties as they are send a clear message: polluters can get away with profiting at the expense of our health and our planet. The fines from buildings like One Bryant should go towards retrofitting affordable housing, like NYCHA and HDFCs, so that no one gets left behind in moving toward a just transition.”

Billionaire real estate developers’ super-polluting buildings, such as Durst’s One Bryant Park, are required to slash their pollution or face large fines under Local Law 97, the world’s most important municipal-level climate and jobs law.

“Our City tried to get building owners to reduce emissions voluntarily for over a decade, and it just didn’t work. Recognizing the depth of the crisis we were facing, we went bold and our City passed Local Law 97, the most ambitious piece of local climate legislation anywhere in the US,” said Councilmember Alexa Avilés. “Mr. Mayor, rolling back or not adequately funding its implementation is like benching your best players in the championship game. Let’s lean into investing in the people of NY, investing in a clean and safe NY, investing in the creation of good green jobs. We need full and unapologetic implementation of Local Law 97 that centers the health and wellness of New Yorkers over wealthy real estate developers and owners of skyscrapers.”

One Bryant Park, also known as the “Bank of America Tower,” is one of the most-polluting buildings in the city.

Only one-quarter of NYC’s buildings are currently such high-polluters that they violate the law’s 2024 pollution caps.

Contrary to Durst’s claims, it is not a “green building” — it is one of the city’s top polluters, in large part because of its large on-site fracked gas power plant.

“Local Law 97 is the single most consequential piece of legislation in New York City in the last decade, and it has the potential to successfully drive down emissions from our city’s largest polluter: big buildings,” said Councilmember Lincoln Restler. “New York City can be a model for how to tackle the climate crisis and create green jobs, and we need everyone in City government to do everything we can to fully implement and enforce LL97.”

Advocates are concerned that the Adams’ administration’s rhetoric suggests the Mayor will attempt to weaken the law, including through weakening fines for violations, rendering the law toothless, or other regulatory or administrative means.

The law sets a formula for penalties and requires building-level results. However, the law also grants substantial flexibility to Mayoral agencies on implementation, creating a host of decision points where the city should maximize pollution reductions and job creation, not relaxed requirements or exemptions for penalties for violations.

Environmental justice communities like Northern Manhattan have for far too long been unjustly burdened by air pollution, high rates of asthma, and other respiratory diseases. Local Law 97 is a critical step forward in reducing New York City’s climate emissions while improving the health of front-line communities…

“Environmental justice communities like Northern Manhattan have for far too long been unjustly burdened by air pollution, high rates of asthma, and other respiratory diseases. Local Law 97 is a critical step forward in reducing New York City’s climate emissions while improving the health of front-line communities,” said Councilmember Carmen De La Rosa. “We need to fully fund and implement this legislation to ensure we address the climate crisis, create green jobs, and protect tenants from displacement and high energy costs. The climate crisis requires a local, national, and international response and Local Law 97 puts New York City at the forefront of this movement.”

“We demand that Mayor Adams effectively enforce Local Law 97,” said Jon Pope, a volunteer with Food & Watch and a professional building contractor. “We are in the throes of a climate emergency. Mayor Adams must not cave in to the demands of wealthy real estate interests. As a building contractor, I know we have the techniques and technologies to meet the law’s requirements, reducing greenhouse gas emissions, cleaning our air, and creating thousands of good green jobs.”

“Generational climate justice is an issue that’s front and center for students like me. More clean and efficient buildings will create jobs, reduce utility bills which many are struggling with right now, and improve our health,” said Isabella Grullon, CUNY Hunter College student, and NYPIRG member. “Local Law 97 is one of the best tools NYC has to combat the climate crisis, but the fossil fuel industry and real estate tycoons want to slow down climate action. We’re here to tell Mayor Adams, ‘for the good of the city and my generation’s future, please don’t let that happen!’”

“It is estimated that Local Law 97 will create more than 40,000 Green union jobs, and reduce New York City’s carbon emissions, and help ensure that our city remains a viable and safe place to live for years to come,” said Councilmember Mercedes Narcisse. “We must not allow real estate interests and big developers to navigate their way around compliance. We must endeavor to continue to make significant strides in moving New York City towards a clean energy future. We need to hold the line, climate change isn’t taking a break with COVID, therefore Local Law 97 should not. I trust Mayor Adams will stand firm on his promise to make New York City a world-leader in environmental justice, and make bold decisions we need to avert our current climate crisis.”

“New York is hurtling towards a climate catastrophe and the only way we’re going to avoid it is if we follow climate-focused legislation like Local Law 97. This groundbreaking legislation will not only put our City on track to meet climate responsible emissions goals but it will also create thousands of green union jobs in the process,” said Councilmember Shahana Hanif. “The real estate lobby has run a coordinated propaganda campaign to weaken the penalties in this law designed to hold polluters accountable. Once again, big business is putting their short-term profits over the long-term needs of our planet. Local Law 97 is here to stay and this Council is ready to defend it.”

The Livestream for the event can be viewed on the New York Communities for Change Facebook page.