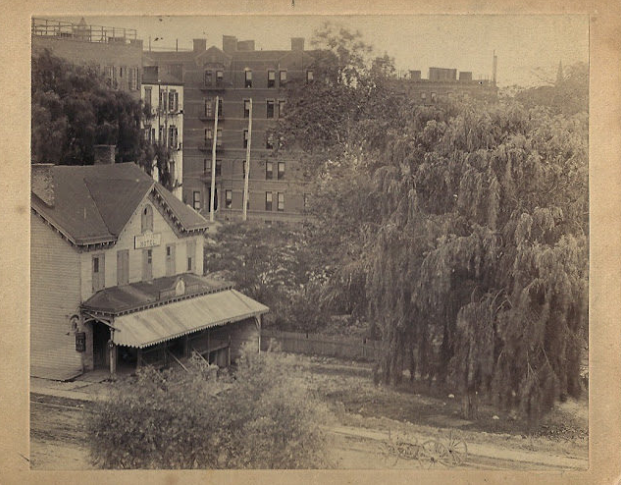 An atmospheric photograph looking down in front of the Downes Boulevard Hotel built some time after the Civil War was located at Bloomingdale Road —later the Boulevard, finally becoming Broadway— and West 103rd Street in the then called Bloomingdale neighborhood in West Harlem 1888.

This is the Downes Boulevard Hotel & Restaurant. The photo was taken from the roof of a building whose original address was 890 Boulevard, a mixed commercial/residential speculatively built structure.

The building still stands, although it has been renumbered 2708 Broadway and is home to Petland Discounts. The photo was taken on July 1, 1888, and it was one of at least 17 taken that day by an unknown photographer. The street in the foreground is 103rd street.

The Downes Boulevard Hotel & Restaurant was located on the block of 103rd Street between Broadway and Amsterdam Avenue.

According to the 1867 map of the area, the structure is there with a little lane running diagonally across what would become the block from southwest to northeast.

The lane may also have served as a property line. Contemporary accounts of the hotel and restaurant were not all that favorable. If the hotel was in operation just after the Civil War it served a purpose – a place to stay if travel down the old Bloomingdale Road was difficult due to weather or other circumstances.

The 9th Avenue Elevated did not open until 1879. This is looking south on the Boulevard. As the old Bloomingdale Road was tamed and made compliant to the Commissioners Plan of 1811 (the grid plan of Manhattan streets north of 14th street), it was widened and called The Boulevard. South of 59th street the street was called Broadway.

On February 14th, 1899, the name Broadway was applied to the entire street, the only street to run the entire length of Manhattan.

When the previous photo was taken the street was still called The Boulevard. I believe that this picture was taken by the same unknown photographer.

The view is from the same vantage point as the previous picture and it looks to be not just the same time and season, but the sign for The Downes Boulevard Hotel & Restaurant is visible as well. In addition, back then, photography was such a pain in the but that no one dragged a camera around to take just one picture.

This looking south from the same vantage point. This is west 103rd street leading up to West End Avenue. The wood-frame house in the center sits was 878 West End Avenue stands today.

The photo, again, appears to be one of the at least 17 taken on July 1, 1888. What crop is being covered in the foreground is a mystery. The house with the conical tower is not on the map of 1867.

According to the map of 1867 the land on which this shack sits was owned by the Furniss family whose holdings in the neighborhood were reduced throughout the 19th century down to the block between West End Avenue and Riverside from 99th to 100th street. The property line stretched out into the middle of 103rd street between West End and Broadway.

The streets were on the maps of 1811 but there was nothing there where the streets eventually would be. On many occasions, property lines in no way adhered to the grid plan.

In many cases the streets were laid out, sewer and water lines put in and the road graded and flattened but the surrounding property was left untouched and often turned these newly laid out streets into mud-filled gullies.

The house in the center of the photo is on the map of 1867. The land was owned by W.P. Dixon. I do not know if Dixon lived in the house as they owned other lands in this area that had large houses on it as well. In addition, he also owned land along 110th street on which he built simple wooden houses for a working-class community called Dixonville.

The 2 story frame house in the middle with the Adirondack Chairs on the porch is now occupied by 895 West End Avenue. Dixon, Furniss, De Peyster, Rogers, Stryker (sometimes spelled Striker) and Astor are common names of land owners in this area. The stone castle looking building sits approximately where 320 Riverside stand today.

The telephone pole and the top of the street light (at the very bottom of the photo) are on Broadway.

Photograph and text adapt via source