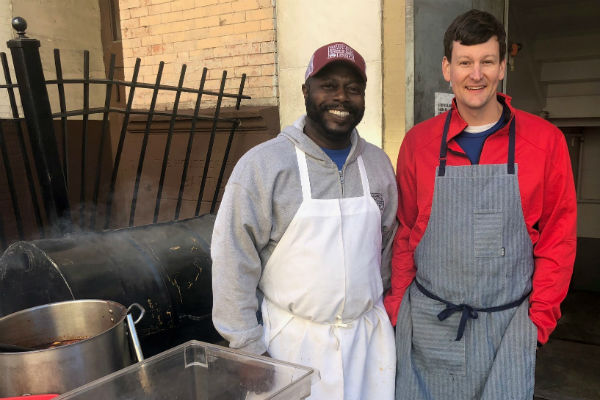 On Friday, October 12th, 2018 I was heading to my workspace and I was hungry so, I stopped by Sylvia’s Restaurant to get some lunch to go. When I turned the corner of 126th Street and Lenox Avenue the aroma of pork BBQ filled the air in a way that I had never experienced before walking down this street. I looked across the street and saw three men standing behind a table and a grill was giving off smoke creating the magical smell of those ribs that was so pleasing to my sense of smell. That’s when I remembered that Marcus Samuelsson was hosting a sold-out dinner that evening downstairs at Ginny’s Supper Club inside his Red Rooster Harlem restaurant for the 2018 New York City Wine & Food Festival (“NYCWFF”).

I immediately went over and asked if those deliciously smelling ribs were on the evening’s menu and the men replied in unison, “Yes they are.” I got to my work space, ate my lunch and I kept thinking about those ribs. I looked up the festival on my phone and discovered that one of those men out front was Pitmaster Rodney Scott who was named the 2018 James Beard Foundation’s Best Chef in the Southeast. He’s only the second pitmaster to be awarded a James Beard award. I decided I may not can go to the dinner that night, but I wanted to introduce myself and see if I could interview for my column.

My server forgot to give me some butter for my corn bread, so I headed back out to get it and to talk with Pitmaster Rodney Scott. I walked up to the table, introduced myself to Pitmaster Rodney Scott and his trusted assistant Trey. Chef Rodney took my business card and sent a text to his publicist. By the time I had returned to WeWork Harlem she had emailed me. We arranged for me to contact Chef Rodney on Sunday evening.

I went online to do some research before the interview and discovered some interesting information. Chef Rodney’s parents, Roosevelt and Ella Scott, owned Scott’s Variety, a gas station, convenience, and grocery store in Hemingway, SC that sold local produce, cold drinks and smoked whole hogs on Thursdays only. The Scotts built their own pits in their garage and use hardwood coals to BBQ; they cut down the trees, hauled and unloaded at the barbeque pit.

The Scott family grew or raised much of what they ate: cucumbers, butter beans, okra, sweet corn, raising hogs and growing tobacco. The meat they ate came from animals they raised, slaughtered and cleaned themselves. Pitmaster Rodney began working with his parents on the farm when he was 6 years old and smoking hogs at 11 years old.

The popularity of their barbeque grew that by the mid-80s they were smoking hogs 2 days a week and then 3 days a week; today they are up to 4 days a week – Wednesday through Saturday. You can buy a sandwich, a whole or half a hog and his sauce too.

In 2010, Chef Rodney was invited to cook at the Charleston Wine & Food Festival and naturally he and his BBQ were the toast of the festival. Folks started traveling back in the country to Hemingway to get his food. Word spread like a wildfire and Chef Rodney started traveling to places like Belize and Australia to share his culinary skills and passion for whole hog BBQ; pretty good for a man from an old Southern town back in the woods with a hog smoked with wood coals, BBQ sauce applied with a mop,

In February 2017 he opened a full-service restaurant, Rodney Scott’s BBQ that serves up an expanded menu 7 days a week. He has added pit cooked BBQ spare ribs and chicken, pit-smoked turkey and steak, chicken tenders, wings, fried catfish, salads and sides; plus, his mother Miss Ella’s banana pudding. They also have a kid’s menu as well.

I asked him if any of his 3 sons shows interest in learning the business and he said his youngest, 9-year old son is very interested. I was curious how he had to improvise in cooking the spare ribs up on the street versus how he smokes the ribs in Charleston with wood coals only. Chef Rodney replied, “Yes, he did have to make adjustments cooking the pork ribs up here. They also had a beef dish and a vegetarian dish for the non-pork eaters here in NYC.” Chef Rodney told me after the dinner Chef’s Marcus and Ed took him and his assistant Trey out to Sylvia’s Restaurant and to another spot to listen to some music; we had a good time.

So, I asked him, “When are you coming to New York chef?” He replied, “I’m interested in New York, but I like to take my time and not rush. I learned some lessons when we opened the Charleston location and right now I’m focused on opening the Birmingham location.”

I told Chef Rodney that I had already spoken to my sister Sabrina about us making a trip up to the Charleston restaurant when I visit my family in Savannah, GA for the Christmas holiday season this year; it’s just a two-hour drive. “I plan on buying some of his sauce and maybe this year my sister won’t have to grill me some ribs to come home. That’s why I take the train ride down and back; I can add his food into my cooler along with the 50 lbs., of wild Georgia shrimp I bring back every trip.” Chef Rodney told me, “Let me know when you’re coming and if my schedule permits I’ll be there to greet you.”