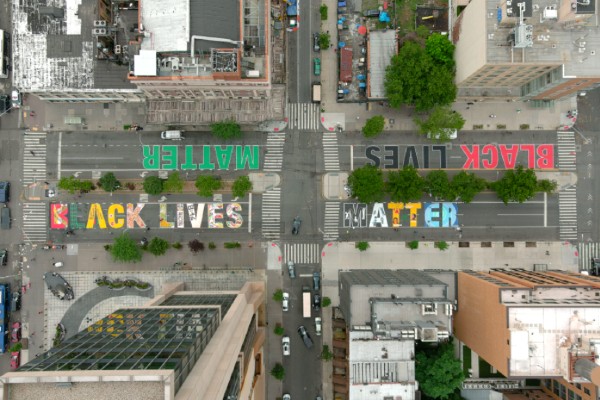 Juneteenth marks one year since the Harlem community announced it would install its own Black Lives Matter street mural.

To mark the occasion, mural organizers Nikoa Evans of Harlem Park to Park and Valerie Wilson of Valinc PR along with mural curator and sculptor LeRone Wilson announced the release of the trailer to the short film An American Street Mural in Harlem the team produced along with Filmmaker Ano Okera and his company New Kingston Media.

The trailer precedes a short 35-minute film about the mural’s weeklong installation process that brought out more than 300 Harlemites in this unprecedented community effort to communicate a simple but clear message through art – BLACK LIVES MATTER. The film will be released this Fall.

The mural, produced by Harlem Park to Park, along with collaborators Got to Stop, LLC and Valinc PR; and curated by LeRone Wilson spanned 2 city blocks along Adam Clayton Powell Jr Blvd between 125th and 127th streets. Two full murals ran along both sides of the four-lane wide boulevard, with the north-facing words painted by 8 commissioned fine artists working or living in Harlem and the south-facing words completed by representatives of over 25 Harlem-based community organizations. Artists include LeRone Wilson, Dianne Smith, Thomas Heath, Guy Stanley Philoche, Omo Misha, Felix LesNY, Jason Wallace and Joyous Pierce.

The mural’s launch was attended by the city’s leaders including Mayor DeBlasio and was covered internationally, with the New York Times proclaiming it “Street Art That Contains Multitudes” and Architectural Digest calling it the “Monumental Black Lives Matter Mural.”

“Creating this project, I immediately understood the historical impact it could have on the ways art can give voice to and document movements,” said Wilson. It was an honor to work with my artist colleagues to create a piece of public art in the midst of such a historic moment. To have this work installed on the streets and central square of this historic black neighborhood and be shared around the world centering these powerful words finally being heard globally was a wonderful responsibility and challenge as artists,” he added.

The film documents with vivid imagery and captured dialogues the story of the tremendous community-driven effort that brought out Harlem’s residents, many of whom were coming outside with other people for the first time since the lockdown.

“This project came from such an emotional place and has such historical relevance that it was important to document it in its entirety. My team decided to capture video and still footage of the journey from when we came out to start installing the mural to its completion and unveiling. What we captured will live as a moment in time when the world stopped to consider the weight of those words, “Black Lives Matter,” said Okera.

The film includes interviews with the organizers and artists as well as cameo appearances from notable locals like Bevy Smith and Tren’ness Woods-Black and politicians like Mayor DeBlasio and Letitia James.

In addition, corporate partner Uber announced its purchase of the first of edition of 10 large-scale prints made of the mural.

The work will hang in Uber’s new corporate headquarters in San Francisco and marks the first purchase of the important work.

Uber worked with Harlem Park to Park and ValincPR to produce the award-winning Renaissance Pavilion at Strivers’ Row, a bespoke destination outdoor Dining pavilion in the historic neighborhood of Strivers’ Row.

The program was created to support local black-owned businesses. They connected with the team through their work on the mural.

“Uber is honored to continue its support of Harlem’s black community with the purchase of this important piece of art. We were pleased to champion the work of several talented local artists during our Strivers’ Row restaurant popup. This work wonderfully illustrates that moment in time. They collectively reflect the complexity of what the world was feeling. We hope this art piece, Black Lives Matter Harlem Street Mural, is the first of many from the communities we serve,” said Julia Paige Director, Social Impact at Uber.

The membership of Harlem Park to Park is comprised of premiere businesses located within the geographic area of Central Park North to 145th Street and Morningside Park to Marcus Garvey Park.

HP2P produces strategic marketing and economic development initiatives designed to promote and ensure the sustainability of its member businesses and celebrate the neighborhood’s historic CHARM. Community and Culture, Heritage and Hospitality, Art and Architecture Retail and Restaurants Music and Media.

A sculptor and painter living and working in New York, Lerone Wilson has exhibited his work in solo and group exhibitions around the country and internationally.

He is working with historical documentation and materiality through his compositions of sculpted paintings and objects made of his signature medium of beeswax. 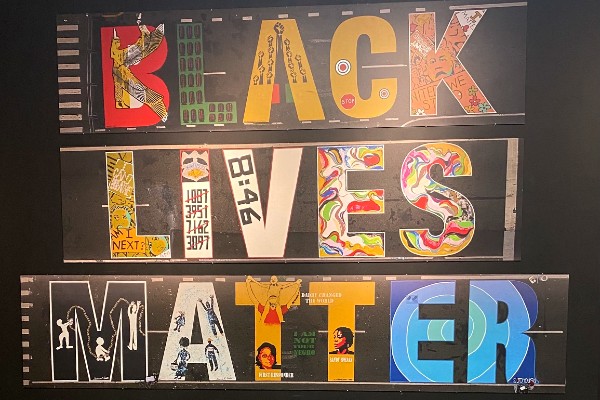 His films/TV projects are thrillers, crime dramas, musicals, and documentaries that are in development in London, New York and Jamaica. He is proud to launch An American Street Mural In Harlem as his inaugural short documentary film.

New Kingston is committed to the creation, development, and production of brand media, film content, best-in-class software, and socially conscious community programming for a new generation of female and black & brown enterprises and their audiences.