Another New Condo Comes To Harlem The NY Times reports that in New York, a checkerboard of blocks, circles are hard to come by. Even so, Frederick Douglass Circle, at the northwest corner of Central Park, has long suffered from inattention.

From the late-19th to the mid-20th century, elevated trains clattered across 100-foot-tall tracks there. And in recent years, the intersection’s barren islands were often relegated to unofficial parking lots.

But a new 12-story, 48-unit condominium called Circa Central Park, rising on the northeast edge of the circle, should help give its namesake new stature.

“The building is the conclusion of the story of trying to make the circle whole,” said Anne Simmons, the secretary of the Friends of Frederick Douglass Circle, an advocacy group that has worked for decades to improve the place where West 110th Street, Central Park West and Frederick Douglass Boulevard all meet, on the edge of Harlem.

Ms. Simmons, a retired public school art teacher, does worry that the starting prices of around $1 million for the market-rate units may be a bit steep. Still, she prefers Circa Central Park to the gas station that preceded it on the site. “For the neighborhood,” she said, “this is a beginning.”

Developed by Artimus Construction, a prolific local builder, Circa, at 285 West 110th Street, has an unusual shape. Its facade bends with the circle, giving it a concave look that defies Manhattan’s grid. The roofline, designed by FXFowle Architects, is not squared off but sloped, courtesy of a rising series of terraces. The effect resembles a half-pyramid.

The windows that face a woodsy section of Central Park are tall, though they don’t quite run from floor to ceiling. Privacy-minded residents don’t want to be completely exposed to the street, said Dan Kaplan, a senior partner at FXFowle, which also designed the Greenwich Lane condo complex on the site of the former St. Vincent’s Hospital campus in Greenwich Village.

Buildings in general have better curb appeal if not every object is bared to the world, Mr. Kaplan said. “The backs of furniture and trash cans are not so nice to look at,” he added. 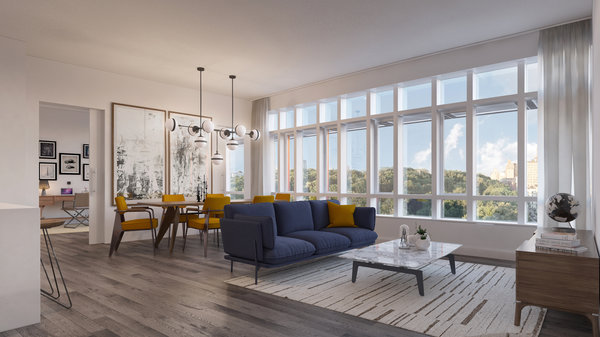 But too much transparency won’t be an issue on the West 111th Street side. On those walls, Circa will be clad in a gray brick, to mesh with its prewar neighbors.

Kitchens will feature Caesarstone quartz counters, while master baths will have white marble tile floors. Thirteen of the apartments have private balconies or terraces, and there will be 3,000 square feet of shared outdoor areas, said Shlomi Reuveni, the managing director of Town New Development, which is handling sales.

Circa is also making available to its residents a fleet of remote-controlled model boats that can be sailed on the Harlem Meer, the Central Park lake nearby. Skateboards and bicycles, covered by common charges, will also be offered for borrowing. “Central Park is an extension of your amenities,” Mr. Reuveni said.

Of Circa’s 48 units, 38 will be sold at market rates ranging from $1,500 a square foot to $3,000 a square foot, or starting at about $1 million for a one-bedroom, Mr. Reuveni said. Though marketing has not yet begun in earnest, he said a few contracts were already out in late November. The remaining 10 units, which are reserved as affordable housing, will be sold at below-market prices through a lottery.

The market prices at Circa may seem high. At Towers on the Park, a nearby condominium, sales prices average $1,000 a square foot, according to Bob Pollock, the owner of the Uptown Homes Real Estate Company in Harlem, who frequently sells in the complex.

Admittedly, a new condo with luxury finishes like Circa commands a premium over such an older building.  Designed by Bond Ryder James and completed in 1988, Tower on the Park, with 599 units, was built with private and public funds and had income restrictions to target middle-class buyers. But those rules expired several years ago, Mr. Pollock said.

If the value of Circa’s site is any indication, it’s clear that the area’s fortunes are sharply changing. According to court documents, the owners of the gas station paid the city $375,000 in 1996 for rights to the land, which had had a gas station on it at least since the 1960s. In 2014, after a drawn-out court battle over the city’s rights to the property, which once was part of an urban renewal area, the Economic Development Corporation ended up paying $10 million for the site, according to city records. That same month, Artimus closed on the property for $25.5 million.