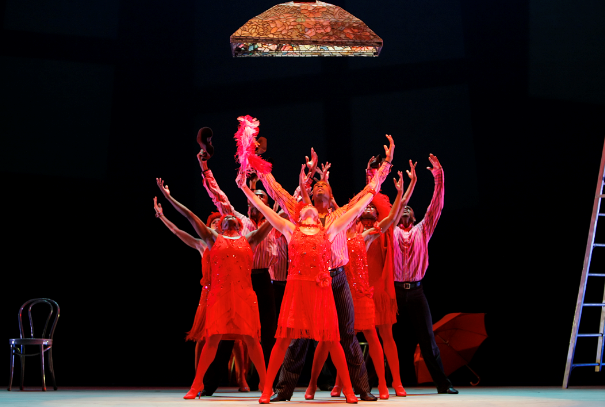 The Ailey organization continues to carry forward Alvin Ailey’s pioneering legacy of not only entertaining but uniting, empowering, and educating through Ailey All Access.

On Tuesday, March 30, 2021, at 7 pm EDT, Alvin Ailey’s classic Blues Suite will be broadcast online to celebrate the Company’s first performance on this date in 1958.

Featuring an introduction by Alvin Ailey and a performance from the 1985 PBS Great Performances television special Three by Three, the anniversary presentation will stream free for two weeks.

With the rumble of a train and the toll of distant bells, a cast of vividly drawn characters from the barrelhouses and fields of his Texas childhood are summoned to dance and revel through one long, sultry night.

Ailey’s classic is set to songs of lost love, despair, and protest, expressing the sorrow, humor, and humanity of the blues, the heartfelt music that he called “hymns to the secular regions of the soul.”

Additional online special programs in May and June will be announced later.

For further updates on the spring series and schedule, visit Ailey All Access and www.alvinailey.org

Movers of all ages and experience levels are invited to enjoy a free workshop featuring student-favorite techniques to mark the Ailey Extension’s sweet 16 birthday and another year of welcoming all people to join in the dance.

On Saturday, April 3, 2021, the festivities kick off at 3:30 pm EDT with Jose Ozuna teaching a high-energy Zumba party; followed at 4 pm EDT by Karen Arceneaux leading Horton, the technique that is the foundation for many of Alvin Ailey’s signature works; and culminates at 4:30 pm EDT with TweetBoogie guiding students with a Hip Hop class that will have their hearts pumping.

Save your spot by signing up here.

Since 2005, the Extension has worked to make dance accessible to all people and enrich the lives of our community, nationally and internationally, through dance classes, workshops, student performances, and group visits with prominent dance instructors and musicians from around the world.

Ailey Alley Access replaces the performances that would have been seen during Ailey’s National Tour.

In addition to being the Principal Dance Company of New York City Center, where its performances have become a year‐end tradition, the Ailey company performs annually at the John F. Kennedy Center for the Performing Arts in Washington, DC, the Auditorium Theatre in Chicago, The Fox Theatre in Atlanta, Zellerbach Hall in Berkeley, CA and at the New Jersey Performing Arts Center in Newark (where it is the Principal Resident Affiliate), and appears frequently in other major theaters throughout the world during extensive yearly tours.

The Ailey organization also includes Ailey II (1974), a second performing company of emerging young dancers and innovative choreographers; The Ailey School (1969), one of the most extensive dance training programs in the world; Ailey Arts in Education & Community Programs, which brings dance into the classrooms, communities, and lives of people of all ages; and The Ailey Extension (2005), a program offering dance and fitness classes to the general public, which began with the opening of Ailey’s permanent home—the largest building dedicated to dance in New York City, the dance capital of the world —named The Joan Weill Center for Dance, at 55th Street at 9th Avenue in New York City.