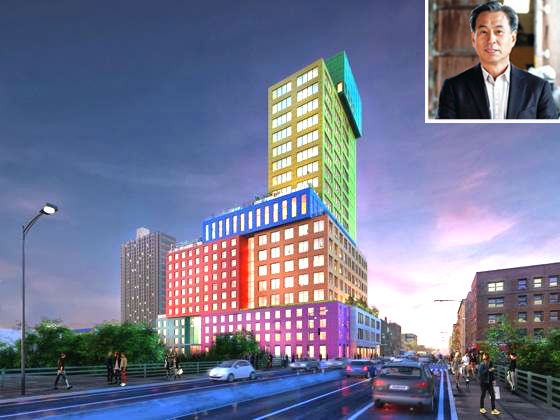 Youngwoo & Associates (YWA) together with its special and committed partner Beijing Construction and Engineering Group International (BCEGI) commemorated the groundbreaking of “The Radio Tower & Hotel,” a transformative ground-up development project in Washington Heights. The property is located in a Qualified Opportunity Zone and is one of the first development projects in an Opportunity Zone commencing construction in the country.

The 22-story, 295-foot building, on 2420 Amsterdam Avenue (between 180th and 181st Streets) includes a 155,000 square foot Class-A office tower with sweeping views of Upper Manhattan, a 221-key boutique hotel, and 8,000 square feet of ground-floor retail space. Principal Young Woo said the concept for the tower was inspired by the local community and a desire to build a structure which paid homage to the local residents. Mr. Woo stated, “My hope is that this building will become a great source of pride for the Washington Heights community and a gathering place for local residents and their guests. Washington Heights has long been overdue for such a project both in terms of design aesthetics and the creation of new and vibrant space. We believe this project will be a catalyst for positive change to encourage further contextual development.”

YWA acquired the site, which was formerly a gas station, in 2013, and since the acquisition, has watched the area and the community experience growth and interest from commercial tenants. Principal Margarette Lee noted how she has “witnessed the 181st Street corridor and the surrounding area emerge as an important hub of Upper Manhattan and is excited to contribute to the vibrancy of the neighborhood with our project. “

The project has attracted attention from the design community as it is internationally-acclaimed Dutch architect, MVRDV’s first major project in the United States. The building’s colorful design which is drawn from the color buildings in the community as well as the building’s unique massing result in a highly-visible and defining structure that will become a landmark for Upper Manhattan. MVRDV is collaborating with local architect firm Stonehill & Taylor and interior designer Workshop APD. The Lee & Associates team of John Cannon, Steve Lorenzo, Mitchell Salmon, Christopher Ventura, and Sergio Turaev has been retained as exclusive leasing agent for the project’s office and retail spaces.

“In light of YWA’s commitment to the upper Manhattan community, this development will provide exceptional, state-of-the-art office and retail opportunities for new tenants,” explains Mr. Salmon. “The project is also a much anticipated ‘first’ for the area, seeing as it will be the first high-rise office tower north of 125th Street. We couldn’t be more excited to work with Youngwoo at this pivotal time in the history of upper Manhattan.”

The Washington Heights’s project is a continuation of Youngwoo & Associate’s legacy of creating mixed-use “destination” projects including Pier 57 and The Bronx Post Place in New York along with 1611 Ellsworth Industrial in Atlanta, Georgia. The firm also recently announced its plans to raise a $500m opportunity fund to focus on similar projects in these and other emerging neighborhoods in federally designated Opportunity Zones.