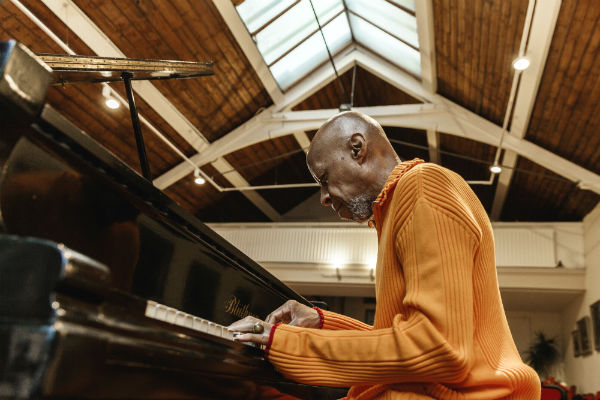 one of America’s most influential ambient musicians, recently spoke to Harlem World Magazine about his new album, Moon Piano.Laraaji, now 77, studied music at Howard University. He was discovered by Brian Eno who produced his acclaimed Ambient 3 album. Laraaji has studied mysticism extensively and founded the Laughter Meditation Workshops.

Yolande Brenner: What is the significance of the title of your new album, Moon Piano?

YB: Moon Piano is the second in a trilogy, with Sun Piano being the first. How did you plan for the three parts to relate to each other?

Laraaji: This plan emerged during the mixing stage when we saw the amount of music we had recorded.

YB: The song titles–like the music– in Moon Piano reflect a sense of tranquility: Stillness, Bathed in a Glow, and Trance Gaze to name a few. When did you realize that you wanted to express this sense of peace in your music?

Laraaji: Perhaps around the age of twelve I felt strongly about contributing to the spiritual prosperity of humanity through whatever means or gifts I could cultivate.

YB: You describe the record as “Contemplative sound painting, embracing quiet tranquil unfolding of nurturing reflection.” Do you feel that nurturing of the self and perhaps being comfortable with solitude is an aspect of life that doesn’t receive as much attention as it deserves?

Laraaji: On the surface, it seems like more individuals are wanting a deeper connection to higher meaning and to more sustainable contentment.

YB: What is your process of creating new tracks? What part of the process comes first?

Laraaji: I prepare for improvisational recording through visualization, physical, mental, and breathing rituals. I approach music channeling as a sacred ritual and conscious self-evolution.

YB: Do you think about your listeners when you create the music, is it an interaction between your ideas and your instrument or is it more of a contemplative act?

YB: Your last album, Sun Piano, was picked as The Guardian‘s contemporary album of the month, and was the subject of a Washington Post feature. Is this a new phase in your career?

Laraaji: The piano record release is a new phase. That I am able to finally, after many years of multi-instrumental recording, share my uplifting music vision through fresh piano music is a new phase: being accepted as a committed pianist.

YB: You recorded Moon Piano in a Brooklyn Church, and some of the ambient sounds of the environment appear on the album. What elements of everyday sound do you find most musical?

Laraaji: The underground roar machines of the New York subway system are musical drama. The sound of overhead jet flights in and out of LaGuardia, the distant sound of the above-ground Metro-North trains over the Park Avenue approach to Harlem 125th Street Station, the sounds of motor-bikers displaying daredevil stunts up and down Malcolm X Boulevard, the gentle chirps of Starling bird community in the morning on my fire escape, the sounds of Saxophone practice in the neighborhood, the sound of New York’s innocence and stillness in the early hours of the morning.

YB: With its solo piano tracks, Moon Piano has a somewhat melancholic feel in parts. What inspired the mood of the album?

Laraaji: Moon piano is the result of selecting and editing from two days of continuous free flow piano improvisation. At times during the recording session melancholic moods surface and I hang out with them as they pass through… perhaps the imagery of dear loved ones or poetic memories come up.

YB: You learned piano growing up in the 1950s in New Jersey. Do you remember the moment you discovered your love for the instrument?

Laraaji: It was while attending Baptist church functions in my hometown. At times the upright piano would be available for gentle exploration when no function was in session. Around the age of eight, my mother gifted me with an upright piano and piano teacher so I could dive in deeply.

YB: I love this quote from your Washington Post interview: “This ocean is everywhere already. Music and sound are just ways to unlock our dormant memory that right, where we are, is a whole ocean of peace, perfection, oneness, eternity.” Why do we forget this “ocean of peace” so often? Do you think this is just the nature of human life that much of it is striving, and little of it is peace?

Laraaji: Using the five senses and the thinking mind could create an imbalance if not enough inner still time is practiced for sure. This practice requires inner discipline which can require an outer teacher, guide, mentor or guru. There is a highway of outer distracting information so available today making it easy to postpone inner stillness practice.

However, these past six months have offered extended vacation time to those of us who are willing and able to make meditation, contemplation, and sincere self-analysis a major addition to our lifestyle.

YB: Were your parents supportive of your musical goals as a child?

Laraaji: My mother made huge contributions to my musical development from the early years through to Howard University College of Fine Arts.

YB: Do you have any musical siblings or other family members?

Laraaji: Two younger brothers who chose the path of domestic security. Music was not their calling.

YB: You’ve studied a number of instruments. Do you have a favorite? Do you still like to sing?

Laraaji: Yes I sing a lot, I have released several recordings with vocal work. Ei: Vision Songs Volume 1. My favorites are keyboard and voice, but the instrument of greatest joy is “I Am Consciousness.”

YB: What is most memorable to you about your experience of studying at Howard University?

YB: After studying at Howard University, you pursued a career as a stand-up comedian and an actor. What made you decide to focus on music?

Laraaji: Music was always my main focus and goal comedy and acting as part of the plan to get financially stable so I could devote my time to composing. When I discovered the autoharp, I had discovered a unique re-entry into musical creativity. This quickly took the lead as my musical life began to blossom. 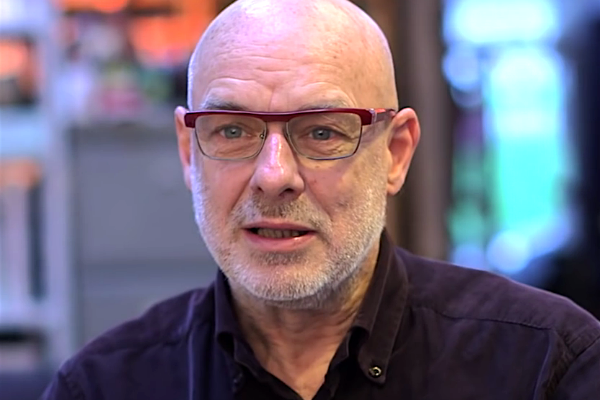 YB: Brian Eno discovered you in Washington Square Park, and produced your album, Ambient 3: Day of Radiance. Did anything from that experience stick with you in the way you produce your music now?

Laraaji: That Brian Eno collaboration reinforced my trust in mind science treatments as I believe positive affirmations work. I had prayed to be guided to the right music producer. Also, the Day of Radiance album is my international introduction to wherever I perform.

YB: How important are your studies of Eastern mysticism to your music? Do you have a daily practice of meditation or a mantra you use to focus?

Laraaji: Eastern mysticism has had a very important impact on my music. It led me inward to a place of cosmic consciousness and of patient receptivity where tremendous otherworldly inspiration could shine through and be integrated as a vision for new music.

YB: What inspired you to start the Laughter Meditation Workshops? Are there any tracks in Moon Piano that you would relate to laughter?

YB: Have the events of 2020, with the COVID crisis and social unrest of Black Lives Matter affecting many lives, had any impact on your music or its reception? Do you think perhaps listeners are even more receptive to the sense of tranquility and expansiveness in Moon Piano?

Laraaji: Yes, we have observed a definite uptick in calls for my music performance and online laughter meditation sessions. Already I’ve received positive testimony on the deeply calming influence of listening to Moon Piano.

YB: Do you have advice for any of our readers who are aspiring musicians?

Laraaji: Accept that you are on a Vision Quest. To find your message and it’s language. Find your discipline, practice, and prepare to serve through your art.

YB: What would you like listeners to come away with after listening to Moon Piano? Or what do you hope they will find as they listen to it?

Laraaji: A deeper sense of their inner quiet.

YB: At 77 years young, with an amazing career, a new album, living in Harlem – what is the secret to your longevity as an artist and as a creative?

YB: Is there anything extra you would like to add about Moon Piano for Harlem World readers?

Laraaji: Moon piano, unlike Sun Piano, offers a less busy listening, the emotional space of quietness, gentleness, timelessness, and restful introspection and even soft sensual passion…the element of Lunar vibration, night time, internal. This album was edited out of 2 days worth of solo piano improvisation…during which I flowed through various moods and emotions. The producer and mixing engineer helped to decide which tracks would make up Moon Piano.

Here’s The Making of the Piano Trilogy:

Yolande Brener is a mom, an educator, a Harlemite who works at CBS, writes for Harlem World Magazine, and is the author of Holy Candy: Why I Joined A Cult And Married a Stranger Culture/. Read more Yolande’s Yard here.

Photo credit: 1) Laraaji Photograph by Daniel-Oduntan. 2) Brian Eno. 3) Video of Laraaji by permission of the artist.