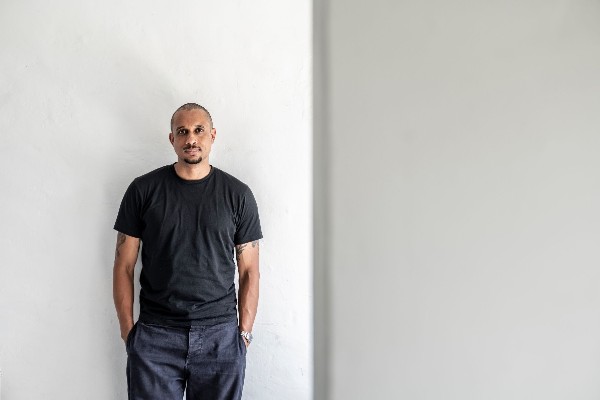 The Studio Museum in Harlem is proud to announce that it will exhibit the first solo US museum presentation of the work of Thomas J. Price beginning October 2, 2021 as an outdoor installation in Harlem’s historic Marcus Garvey Park. Titled Thomas J. Price: Witness, and shown as part of the Studio Museum’s ongoing series of inHarlem initiatives, the commission will comprise a single monumental work: The Distance Within (2021), Price’s nine-foot-tall bronze sculpture depicting a young Black man looking down at his cell phone.

The installation, which will remain in place for an entire year, is the first project to be announced in the Studio Museum’s slate of exhibitions and programs for fall 2021. As the Studio Museum moves forward with the construction of its new home on West 125th Street, designed by Adjaye Associates with Cooper Robertson, offsite exhibitions and installations allow the Museum to amplify its mission throughout Harlem and the city.

Thelma Golden, Director and Chief Curator of The Studio Museum in Harlem, says, “We are thrilled to continue the Studio Museum’s history of introducing the public to artists of African descent and advancing their work by being the first US institution to mount a solo presentation of the sculpture of the remarkable Thomas J. Price. In The Distance Within, he celebrates ordinary blackness, rendering it extraordinary, and asks us to deeply consider the very function of monuments as defining the familiar. We feel certain that our public in Harlem, and throughout the city and the world, will find this installation thought-provoking, moving, and extremely powerful.”

The form of The Distance Within pays homage to an earlier Price work, Network, that was presented in the UK in 2013. Price’s large-scale figural sculptures are inspired by real people, often those who live and work in South London, where the artist was born and raised and currently resides.

“I want to interrogate [notions of] presence, movement, and freedom,” Price has said. “Whom do these spaces belong to? And what bodies are provided more or less autonomy to move with liberty through public [space]?”

Price’s relationship to Harlem comes via his lived experience as a Black man looking “across the pond” from his home in Brixton to what he describes as that neighborhood’s “counterpoint.” Both are historically Black neighborhoods with rich social and cultural legacies, which stand in dialogue with one another.

Thomas J. Price: Witness is presented as part of The Studio Museum in Harlem’s series of collaborative initiatives, in Harlem, encompassing a wide range of artistic and programmatic ventures, from site-specific artists’ projects to collaborative presentations with civic and cultural partners in Harlem.

Thomas J. Price’s multidisciplinary practice confronts preconceived attitudes toward representation, perception, and identity. Price’s large-scale sculptures depict imagined subjects whose features are an amalgamation of sources. Observed individuals and stereotypes represented in the media are mixed with references to ancient, classical, and neoclassical sculptures. These works serve as psychological portraits of the viewer by revealing socially learned attitudes and understandings as they project identities onto the depicted characters. Using methods of presentation, material, scale, and detail Price aims to challenge viewers’ expectations and assumptions.

Born in London in 1981, Price studied at Chelsea College of Art and the Royal College of Art in London. Price has held solo exhibitions at institutions including The Power Plant, Toronto, Canada; The National Portrait Gallery, London, UK; Royal Academy of Arts, London, UK; MAC, Birmingham, UK; Royal College of Art, London, UK; Harewood House, Leeds, UK; and the Yorkshire Sculpture Park, West Bretton, UK. Price’s work is held in collections such as The Donum Estate, Sonoma, CA; Government Art Collection, London, UK; The Wedge Collection (Canada), Derwent London (UK), Murderme (UK), and the Rennie Collection (Canada). Price was the recipient of the Arts Council England Helen Chadwick Fellowship in 2009, and has been commissioned to create a public artwork in Hackney in 2022 commemorating the Windrush generation.

Founded in 1968 by a diverse group of artists, community activists, and philanthropists, The Studio Museum in Harlem is internationally known for its catalytic role in promoting the work of artists of African descent. As it celebrates its 50th anniversary, the Studio Museum is preparing to construct a new home at its longtime location on Manhattan’s West 125th Street, designed by Adjaye Associates in collaboration with Cooper Robertson.

The first building created expressly for the institution’s program, it will enable the Studio Museum to better serve a growing and diverse audience, provide additional educational opportunities for people of all ages, expand its program of world-renowned exhibitions, effectively display its singular collection, and strengthen its trailblazing Artist-in-Residence program.

While the Studio Museum is currently closed for construction, the Museum is working to deepen its roots in its neighborhood through in Harlem, a dynamic set of collaborative initiatives. The Museum’s groundbreaking exhibitions, thought-provoking conversations, and engaging art-making workshops continue at a variety of partner and satellite locations in Harlem and beyond.