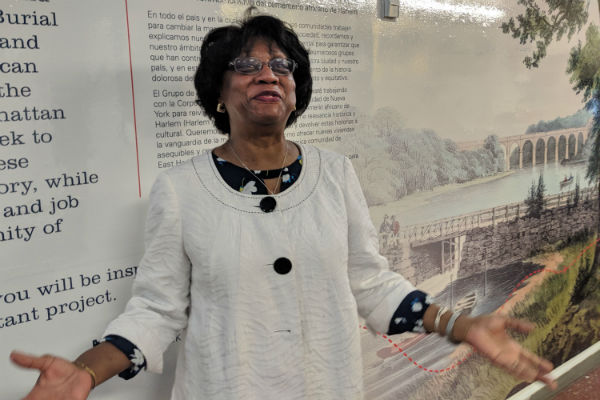 After a decade of planning and research by Harlemites, an unused bus depot on East 126th Street is being prepared to honor its past state: a burial ground for enslaved and free African people.

The city’s Economic Development Corporation says it will begin looking this fall for a nonprofit operator for the Harlem African Burial Ground, a cultural center and outdoor memorial set to take shape on a trapezoidal piece of land between Second and First Avenues. The project, officials say, comes with a promise of a built-in funding stream.

In the 1660s, the site was a cemetery, perched on what was then the banks of the Harlem River. It served as the only place in the Dutch-controlled Village of Nieuw Haarlem where people of African descent were legally allowed to be buried.

The Rev. Patricia Singletary of the Elmendorf Reformed Church on East 121st Street can trace her parish’s history back to the colonial-era cemetery and the church to which it belonged, the Reformed Low Dutch Church of Harlem.

For years, she’s spearheaded the burial ground project and done much of the research about the site, paging through maps and records from Harlem’s oldest churches. For her, the process has been “emotional,” she said, particularly when archeologists started digging in 2015 to confirm there were bones on the site.

Singletary said that on the day of the last scheduled dig — after a couple of attempts had turned up nothing — she “had a conversation with the ancestors,” through prayer.

“I told them, ‘Look, we’ve been faithfully seeking you. We want to give you the respect and dignity you deserve. You didn’t get it in life, but you should get it in death. But you need to show up,’” she recalled.

Later that day, archeologists found the first human remains on the site — from a woman, Singletary said.

The city is pressing ahead on its East Harlem burial ground plans even as another black historical site, the Weeksville Heritage Center in Crown Heights, Brooklyn, struggles to raise funds to stay in operation.

Looking to avoid financial shortfalls, the Harlem African Burial Ground Task Force, currently chaired by Singletary and former East Harlem City Council Speaker Melissa Mark-Viverito, pushed for a way to fund the burial site for years to come. The result was an unusual plan to share in gains from the building of apartments that will adjoin the memorial.

When the City Council approved zoning changes in 2017 to allow the new development, Mark-Viverito, who represented the area, reached an agreement with then-Deputy Mayor Alicia Glen. Under the deal, at least 80% of the apartments will be affordable — and the future developer will supply $1 million a year to operate the memorial and cultural center.

That agreement is non-binding until a developer is selected — but two years later, the financial foundation of the burial ground project remains a selling point.

During the opening of an exhibit at La Marqueta about the burial ground’s history last month, Mark-Viverito proudly described the project as “self-funded.” Joy Bailey-Bryant, a cultural development expert who wrote a feasibility study for the EDC, anticipated the investment in the center will bring lots of visitors.

“We know from what’s happening with a lot of our cultural facilities,” she said. “We have to create a program that really both tells the story and draws in all different types of people.”

For the EDC, the project is a chance to achieve multiple goals: providing affordable housing, creating jobs for local residents and promoting tourism — all while paying homage to “erased history,” said Adam Meagher, a vice president at the agency.

“When we talk in our mission statement about building strong neighborhoods, I think this is exactly what we mean,” he said. “This is going to be a community anchor.”

‘We Got Great Gatekeepers’

Singletary says she’s confident she and other members of the burial ground task force will make sure the reality matches the vision.

“If one period is missing or one comma should be there, they will be adamantly in somebody’s face. So there is no way someone’s going to drop the ball. We got great gatekeepers,” she said with a laugh.

It may be another few years before East Harlem sees the changes coming to the East 126th Street site. This summer, locals are invited to visit the burial ground exhibit at La Marqueta. In the fall, the EDC and the Department of Cultural Affairs will release a “Request for Expressions of Interest” for nonprofit groups interested in running the site.

Sometime after that, EDC said, the agency will officially ask for development proposals. But finding an operator for the memorial is the priority, Meagher said.

“For the development to be in line with the vision, the vision has to come first,” he said.