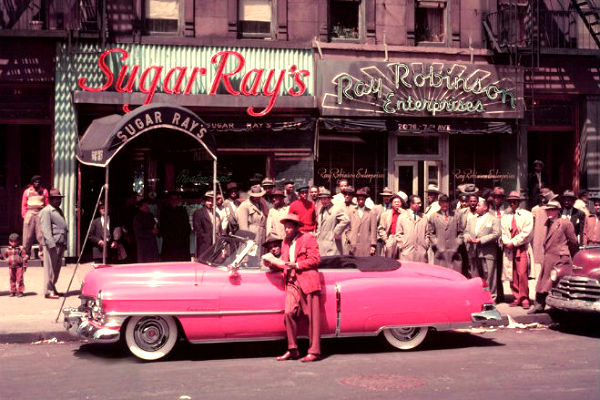 Harlem has been home to many celebrities from all walks of life, but perhaps it is in the sporting world that people from here have found most success.

Who is the greatest sports star to ever live here or represent the area with the right kind of attitude? It possibly comes down to the following name.

The Brown Bomber may have been the finest heavyweight boxer of all time. He wasn´t born in Harlem, but he fought here and his fame in the area led to the Joe Louis Restaurant & Bar being built.

The restaurant is long gone, but the Joe Louis Plaza sign can still be seen on the area between Seventh Avenue and Eighth Avenue.  In the boxing ring, he fought 72 times and only lost 3 of these bouts.  Of his many wins, 57 were knockouts, and he held the world championship title for 12 years.

It is said that up to 100,000 people partied in the streets of Harlem after he won against Max Schmeling, in one of the most legendary boxing matches ever witnessed. His cultural impact was felt away from the sporting world, as his position as one of the first African-Americans to achieve fame gave him a powerful position in the community.

Charlie Pilkington Was the Harlem Flash

Pilkington was of Anglo-Irish descent. He felt had moved from England to Ireland to avoid persecution and had ended up in New York by the time he was born, in 1897.  Harlem Tommy Murphy was one of his inspirations as he started to train as a boxer.

With the nickname of the Harlem Flash, Pilkington soon forged a good career as a featherweight boxer.  After moving to Connecticut, his nickname was changed to the Meriden Flash.

His incredible record saw him lost 4 out of 150 matches at the height of his powers. He was New York champion in three different weight categories and his most famous moments involved knocking down an opponent with his first punch and almost being caught up in a riot when his many fans objected to a fight ending in a draw.

Related:  The New Trends In Art You’d Probably Be Interested In

Kareem Abdul-Jabbar Was One of the Very Best NBA Players

Many great basketball players have also displayed a Harlem attitude throughout their career. Perhaps none sums this up more than Kareem Abdul-Jabbar, who was born in New York and spent his early years in the Dyckman Street projects.

His talent for basketball was already clear to see by high school, as he led his team to a 71-game winning streak and 3 championships in a row.

He set a series of high school records as he blazed his way towards a pro career, where relying on his points was a crucial part of any good NBA betting strategy.

Born as Ferdinand Lewis Alcindor Jr., he converted to Islam and then boycotted the 1968 Olympics team as a protest as the treatment of African-Americans in the US. A glittering pro career and his feared skyhook shot mean that her is now remembered as one of the NBA´s best players of all time.

Sugar Ray Robinson Had Over 100 Knockouts

If Joe Louis was possibly the best heavyweight boxer of all time, then Sugar Ray Robinson is probably deserving of the title of best pound for pound fighter we have ever seen. Born in Georgia in 1921, his family moved to Harlem when he was 12 years old.

Robinson won his first 40 professional fights and has a spell in the US Army. However, he refused to perform in exhibition fights at that time, as African-American soldiers weren´t allowed to watch them. He retired with over 100 knockouts and having won some unforgettable bouts, including his knockout of Gene Fullmer with a perfect punch.

Perhaps the most telling story of his personality was when he learned that Jimmy Doyle, who had tragically died in the ring against Robinson, had planned to buy his mother a house with the proceeds of their tussle. Robinson then gave the lady his earnings from his next 4 fights, so that she could buy her house.