“We’re Not Going Back!” Hundreds Of Long Islanders Rally For Reproductive Rights In Nassau County, NY 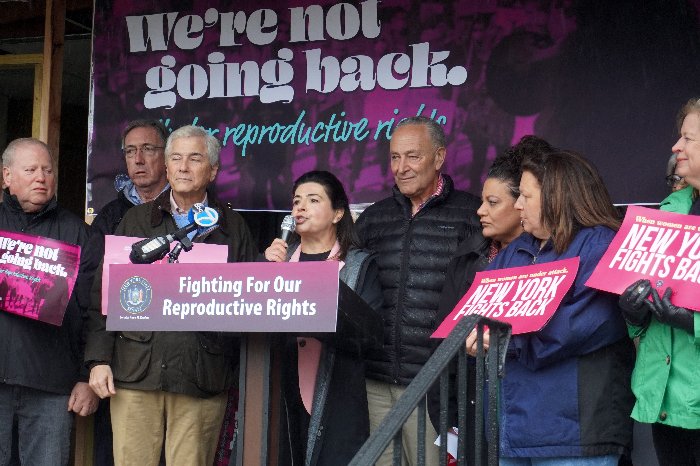 Following the stunning revelation that the Supreme Court is poised to overturn Roe V. Wade and turn back 50 years of progress on reproductive rights in America.

Hundreds of Long Islanders braved the torrent of rain and wind this weekend to come together as a community to express collective outrage and fight back against extremists who are hell-bent on taking away a woman’s right to make decisions about her own body and her own health.

Senator Anna M. Kaplan said “We refuse to be silent while our right to access reproductive healthcare services is stolen from us. We refuse to be sent back to a time when women routinely died in back alleys because no doctor could provide them the care they needed. We’re going to do everything in our power to protect women’s rights here in New York, and we’re going to loudly and proudly fight back against the extremists who are trying to take away our freedoms.”

The event was intended to be a non-partisan display of support for women’s rights, and numerous Republican elected officials including County Executive Bruce Blakeman, Nassau County Comptroller Elaine Phillips, Assemblyman Ed Ra, Town Supervisor Jennifer DeSena and Town Supervisor Don Clavin were invited to participate as event sponsors and speakers, but none accepted the invitation or showed up for the event.

Senator Kaplan concluded “it’s time for all of our elected representatives in Nassau County to get off the sidelines and tell us if they care about women’s rights or not. To those officials who apparently couldn’t be bothered to show up and show support for protecting our rights this weekend, it’s time to go on record and tell us if you support women, or if you’re too beholden to extremists to do the right thing.”