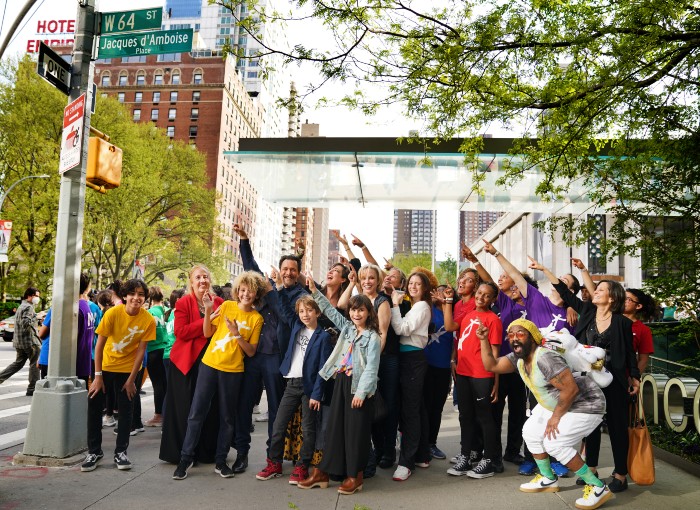 A street in NYC has been named in commemoration of the life and achievements of Jacques d’Amboise, legendary ballet dancer and founder of the arts education organization National Dance Institute (NDI) in Harlem, NY. The northwest corner of West 64th Street and Columbus Avenue in front of New York’s Lincoln Center now displays the name Jacques d’Amboise Place.

Mr. d’Amboise passed away just one year ago, leaving a legacy of giving children everywhere access to the joy and transformative power of the arts through NDI, the organization he founded 46 years ago. 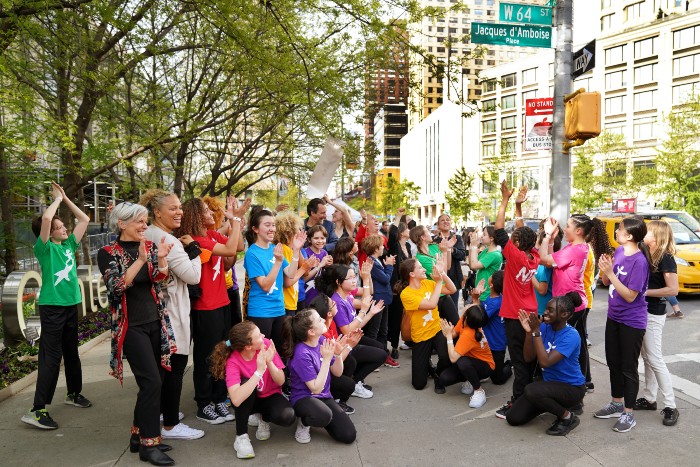 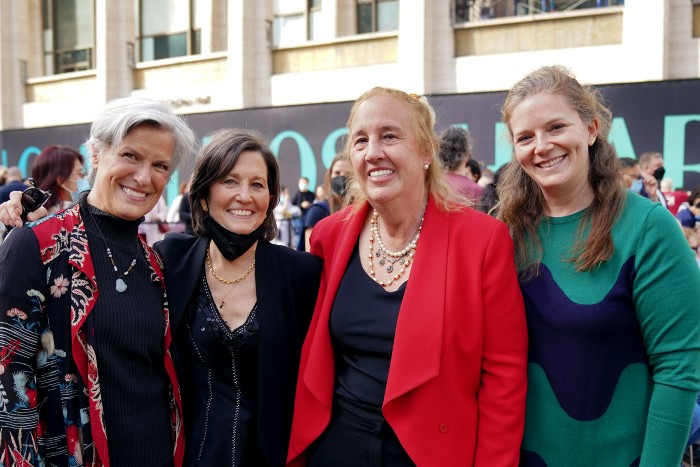 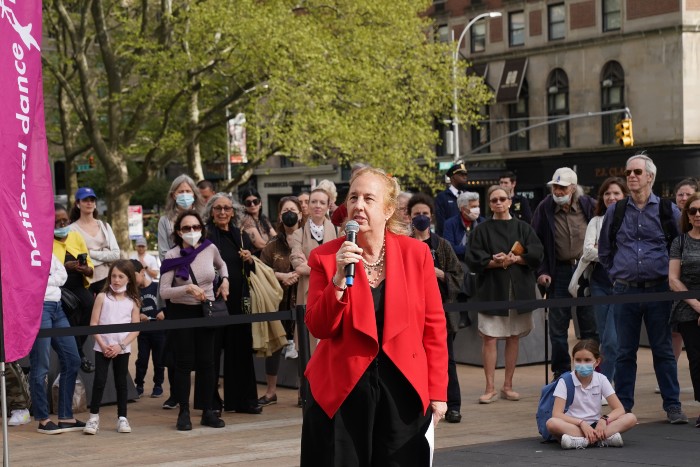 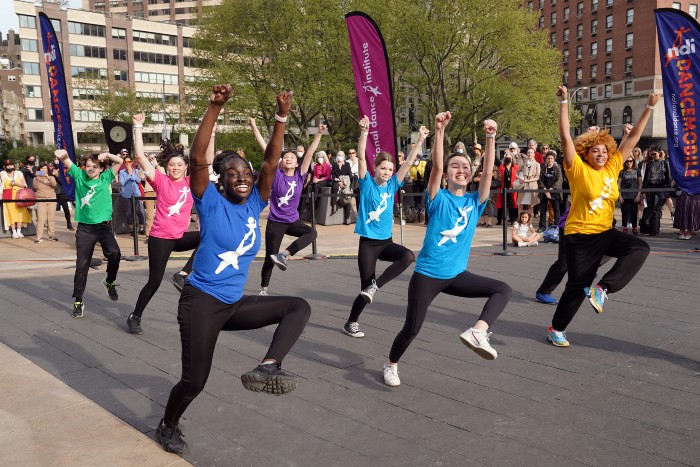 The children of NDI paid tribute to Mr. d’Amboise with two performances, “When the Saints Go Marching In” and “Dancing in the Street.”

“Jacques d’Amboise leaves behind a wonderful legacy that inspires artists to continue Manhattan’s prominence as a global center of music, dance, theater, and the visual arts.  Jacques understood the transformative power, emotion, and joy of dance, and the National Dance Institute has grown – indeed in leaps and bounds – to reach over two million children from Harlem to countries throughout the world,” said Council Member Gale A. Brewer (D-06).  “Jacques’ legacy – and this street co-naming – inspires us all to continue to work together to ensure that every child in this city can access quality arts programming,” she added.

Mr. d’Amboise was one of the most influential dancers of the 20th Century.  He joined New York City Ballet in 1949 and performed until his retirement in 1984.  As George Balanchine’s protégé, Mr. d’Amboise had more works choreographed specifically for him than any other dancer.

He is most remembered for his portrayal of “Apollo,” the oldest Balanchine ballet in New York City Ballet’s repertory.  While still a principal dancer, Mr. d’Amboise established National Dance Institute in 1976.

He led the field of arts education with NDI’s acclaimed program that teaches the magic, rigor and joy of dance and performing. Since its founding, NDI has reached more than two million children worldwide.

The street naming to celebrate Mr. d’Amboise is the first of three events in May and June 2022 to honor his life and work.

The Historic Landmarks Preservation Center will install a Cultural Medallion to honor Jacques d’Amboise at the site of his former residence at 2601 Frederick Douglass Boulevard in Manhattan’s Harlem neighborhood.

The ceremony will be hosted by Dr. Barbaralee Diamonstein-Spielvogel, Founder and Chair of the Historic Landmarks Preservation Center and creator of the Cultural Medallion Program.

Dr. Diamonstein-Spielvogel was recently appointed to serve as a member of the President’s Biden Advisory Committee on the Arts.

To register for the Jacques d’Amboise Cultural Medallion Dedication event that will be held LIVE on Zoom, Monday, May 16, 2022, at 3 pm EST, visit https://rsvp.theworldsbest.events/_01gm0.

The third celebratory event, A Memorial Celebration of the Life of Jacques d’Amboise, will be held at New York City Center on June 1, 2022, at 7 pm EST.

The star-studded celebration will be an evening to remember Mr. d’Amboise and include performances and commentary by many of his contemporaries, New York City ballet principal dancers, the children of National Dance Institute, actors and actresses from musical theatre and family members.

The d’Amboise Family requests that all donations in memory of Jacques be made to his beloved National Dance Institute.

The Jacques d’Amboise Legacy Fund has been established to support artistic endeavors that honor his vision, creativity, and commitment to arts education.

General admission tickets will be available on a first-come basis through NDI’s website https://nationaldance.org beginning May 12, 2022.

Mr. d’Amboise’s work with National Dance Institute brought him national and international prominence.  He was featured in the documentary, He Makes Me Feel Like Dancin’, which won an Academy Award and a Primetime Emmy Award.

He received the MacArthur ‘Genius Award,’ the Kennedy Center Honors, the National Medal of Arts, and many other notable awards for his lifetime achievements.

Additionally, Mr. d’Amboise was inducted into the American Academy of Arts & Sciences.

National Dance Institute uses dance and music to instill in students a love of the arts, a passion for learning, and a desire to strive for their personal best.

At the root of NDI’s methodology is the belief that the arts have a unique power to engage all children—regardless of background, ability, or socio-economic status—and motivate them toward excellence.

Each year, NDI delivers its award-winning arts and learning programs to more than 6,000 public school children per week throughout New York City and reaches thousands more through 12 NDI associate programs across the United States. 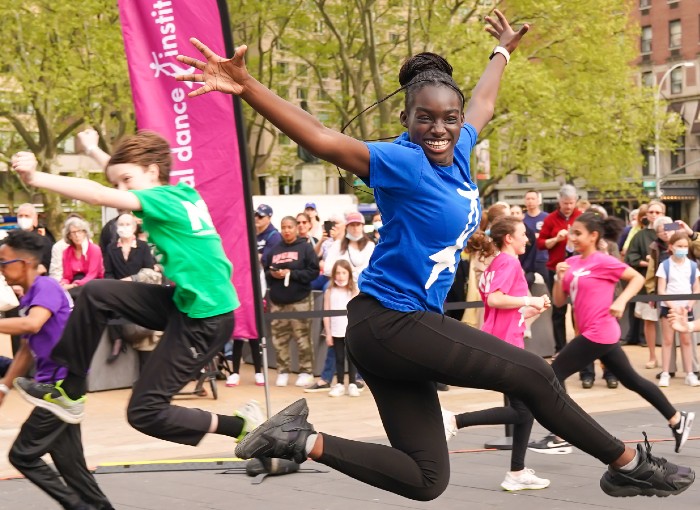