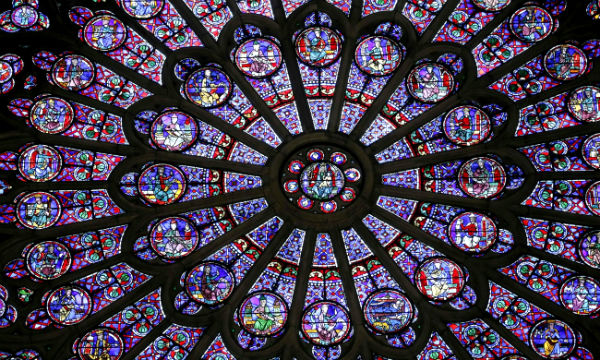 There are a number of Catholic Churchs in Harlem, Harlemites and all New Yorkers mourned the legendary Notre-Dame cathedral as a massive fire engulfed the Catholic landmark on Monday. Visitors to St. Patrick’s Cathedral in Midtown expressed shock and heartbreak as firefighters battled the flames that heavily damaged 850-year-old Paris church less than a week before Easter.

“I was watching at home, the tears were rolling down my face from crying,” said Delphine Hibon, a Parisian Catholic who felt compelled to make her first visit to St. Patrick’s after hearing about the blaze.

The fire spread quickly throughout the medieval cathedral, leading its roof and spire to collapse, the BBC reported. While reports indicated the damage was devastating, Paris’s fire chief said the cathedral’s structure had been saved, according to the Associated Press.

The blaze came at the start of the Christian Holy Week and just days before the church’s Good Friday services. The cause of the fire was not immediately clear, but it reportedly came amid a large renovation to the aging church.

Cardinal Timothy Dolan, the archbishop of New York, said he paid a visit to St. Patrick’s himself “to ask the intercession of Notre Dame, our Lady, for the Cathedral at the heart of Paris, and of civilization, now in flames!”

“We will wait to hear what the best thing we can do to do help. Until then we can give love and prayers,”

“We will wait to hear what the best thing we can do to do help. Until then we can give love and prayers,” Dolan told reporters outside St. Patrick’s. The cardinal said he emailed the archbishop in Paris to show his support.

Derek Anonini, a regular visitor at New York City’s cathedral, said he was “just super awestruck and heartbroken” to hear of the fire.

While he visits the city’s cathedral about twice a week, Anonini said he “definitely felt a need to come today because of what’s going on.” But Hibon said people inside were taking pictures, apparently unaware of the destruction going on across the Atlantic.

“a tragedy for not just the French people, but many faithful Christians at the start of Holy Week.

Elected officials, including City Council Speaker Corey Johnson and Gov. Andrew Cuomo — who is himself Roman Catholic — offered condolences and prayers to the people of France. Johnson called the fire “a tragedy for not just the French people, but many faithful Christians at the start of Holy Week.

The FDNY’s leader expressed support for the Pompiers de Paris, the Parisian firefighting force, as it fought to save a cathedral that survived the French Revolution and World War II.

“Images of Notre Dame in flames are an awful sight to behold,” FDNY Commissioner Daniel Nigro said in a statement posted to Twitter. “The thoughts of the FDNY are with the members of @PompiersParisas they bravely battle this terrible fire in one of the world’s most beautiful and historic houses of worship.”

With its intricate stained-glass windows and vaulted ceilings, Notre-Dame is one of the world’s most famous French Gothic cathedrals. The church’s first stone was laid in 1163 and it became one of Paris’s most popular landmarks, with millions of annual visitors.

St. Patrick’s recently underwent the largest restoration in its history – the project was reportedly finished in 2015 at a cost of $177 million. The church “took steps to make sure a tragedy like this did not happen” while the work proceeded, Dolan said.

The cardinal said he thinks Notre-Dame will eventually experience a revival in the spirit of Holy Week. But Bishop John Barres, the head of Long Island’s Diocese of Rockville Centre, said the Catholic Church would soldier on even despite the destruction at one of its most beloved landmarks.