Watch ‘Merry Wishmas’ On TV One 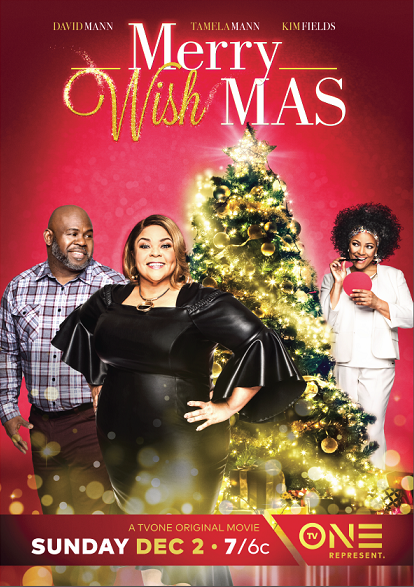 MERRY WISHMAS revolves around successful businesswoman Kenni (Tamela Mann) who hasn’t returned home to the quaint town of Columbia, South Carolina in years. She’s hoping for a peaceful visit when she finally returns home, but unresolved family issues with her sister Dionne (Wilson) and mother Regina (Omilami) threaten to make the Christmas holiday not so bright. She’s reacquainted with Jessie (David Mann), an old high school friend with a fledgling wellness facility – the Beverly Living Center. She’s instantly thrown into the lives of the center’s residents and meets a host of colorful characters including Celine (Fields) and Natalie (Braxton). When Jessie is faced with losing the Beverly Living Center, Kenni steps in to try and help save it. Family conflicts and relationship woes, however, threaten Kenni’s efforts. It looks like only a miracle can save the center and mend broken relationships in time for Christmas. The film also features a cameo appearance by rap artist Yung Joc, best known for popular singles “It’s Goin’ Down” and “I Know You See It.”

For more information about TV One’s upcoming programming, including original movies, visit the network’s companion website at www.tvone.tv. TV One viewers can also join the conversation by connecting via social media on Twitter, Instagram and Facebook(@tvonetv) using the hashtag #MERRYWISHMAS.