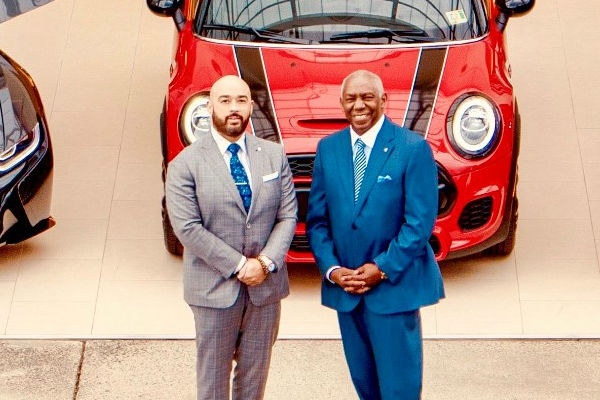 Thomas A. Moorehead, the first Black Dealer in the country of Rolls Royce, Lamborghini, and McLaren, has transitioned from President and CEO to Owner and Chairman of Sterling Motorcars. As an African American business owner, he has been contributing to the economy of the Washington DC Metropolitan Area since March of 2001. Of note, Moorehead was also the former chairman of NAMAD, The National Association of Minority Automobile Dealers.

…the Sterling Community C.A.R.E. Program (Community, Assurance, Reliability and Excellence) making a difference by giving cars to non-profits, local organizations, and schools, with an emphasis on single mothers. This program will begin with the faith-based community identifying single parents in need of transportation.

White is enriching and advancing Moorehead’s vision of community service while spearheading the expansion and growth of Sterling Motorcars. Much like what White has done in the past, he is thrilled to be implementing the Sterling Community C.A.R.E. Program (Community, Assurance, Reliability and Excellence) making a difference by giving cars to non-profits, local organizations, and schools, with an emphasis on single mothers. This program will begin with the faith-based community identifying single parents in need of transportation.

White attributes most of his success to his mentor, the late automotive giant and successful businessman, Cecil Van Tuyl. Under Van Tuyl’s tutelage, White became one of his youngest partners at the age of Thirty-two. White rose quickly in the ranks and generated record-breaking profits and numerous national and local awards. From there, he worked around the country increasing sales, expanding stores and aiding those less fortunate. Said Moorehead, “I welcome handing over the Sterling Motorcars keys to Paul. He possesses my drive and passion for the community as well as the business. I look forward to semi-retirement and focusing more time on Moorehead Properties”.

Thomas Allen Moorehead’s remarkable career has consistently supported his life-long vision: assisting others to realize their own dreams. A visionary business professional, Moorehead is a revered mentor to hundreds of African Americans interested in careers in the automobile industry. As a generous philanthropist, he has funded numerous scholarships for college students and supported charities targeting underserved communities.

The early years of Moorehead’s stellar career were spent at the Mobile and Chrysler Corporations. In 1972, in alignment with his vision, he shifted the focus of his career and accepted a position as Director of Community Service at the University of Michigan. In that capacity, he was responsible for programs that promote civic participation, built community capacity and enhanced the education process. In 1985, Moorehead was selected for the prestigious General Motors Dealer Training Program. In his continuing dedication to excellence, he spent the next three years at a dealership to acquire the skills necessary for success. Finally, he knew he was ready to launch his own dealership: Moorehead Buick/BMW/Isuzu in Omaha, Nebraska. In 1995, he sold the Omaha store and opened Moorehead Buick-GMC Trucks in Decatur, Illinois, where he developed a national sales campaign and entered into contracts with two national rental car agencies. This revenue-increasing move ushered the dealership into elite status among African American automobile dealers.

By 1998, Moorehead, strategically planned his next acquisition: the number one foreign luxury car, BMW brand; his timing was impeccable. At that time, The National Association of Minority Automobile Dealers (NAMAD) was looking for new dealership sites and minority dealer candidates for BMW; Moorehead was awarded one of just three sites identified in the NAMAD report. Despite expansion challenges, he met and conquered each obstacle with the persistence instilled in him at an early age. Moorehead built a 39,000 square foot, state of the art facility with two separate showrooms to showcase the BMW, as well as the MINI Cooper brands.

Always future and service oriented, Moorehead took on an additional business challenge: the hospitality industry. In 2007, Moorehead was the only local minority investor/owner in the Marriott Residence Inn at the National Harbor Resort and Convention Center in Prince George’s County, Maryland. Since 2007, his innovative portfolio has grown to include more than 45 properties.

In 2012, Moorehead expanded his operation by building a 100,000 square foot facility, exclusively for the BMW brand, across the street from the main facility which continued to spotlight. the MINI brand. In December 2013, Moorehead became the first African American awarded a full-service Rolls- Royce franchise. In August of 2016, Moorehead became the first African American owner to acquire both the exotic high-end brands of Lamborghini and McLaren. Moorehead handed the keys to his empire over in April of 2019 to now President Paul White. Moorehead is currently the Owner and Chairman for Sterling Motorcars.

Moorehead earned a bachelor’s degree in Business Administration and Economics from Grambling University in 1966. In 1971, he earned a Master of Social Work degree from the University of Michigan, where he pursued additional graduate study. Thomas A. Moorehead was 12 hours away from earning a doctoral degree from the University of Michigan when he was accepted into General Motor’s prestigious General Dealer Training Program. He has also received three honorary degrees from Grambling State University, Bethune Cookman University and Lawrence University in Virginia. Mr. Moorehead also served two terms on the Federal Reserve Board for the Tenth District of Kansas City. The Mooseheads are also members of the Board of the Library of Congress in Washington, DC.

Paul White is a leader in the automotive industry. His more than 20 years of experience and family legacy have shaped him into a man of passion, conviction, and vision while earning him loyalty and accolades that are testaments to his strong leadership. Paul’s hands-on work in every department of a dealership, his guidance of multi-store and multi-state operations, and his experience with nearly every U.S. and foreign automotive brand combine to give him invaluable perspective and skill.

Through his top-tier leadership roles and experience as a franchise owner, Paul has led some of the nation’s foremost organizations to new, record-setting heights. After learning under the mentorship of Cecil Van Tuyl, the founder of the Van Tuyl Group (now part of Berkshire Hathaway Automotive), Paul worked as General Manager/Partner of Crest Cadillac Infiniti in Dallas, Texas. He was instrumental in helping the 250-employee dealership reach record-setting annual revenue of $240 million and to stay consistently among the top five dealerships in the Van Tuyl Group.

Paul has not only worked in Texas but from coast to coast. In New York, he served as VP of Operations World Automotive Group, where his leadership grew the organization’s annual sales revenues from $400 million to $600 million with 9,500 in new car volume. In 2013 on the opposite coast, Paul stepped into a VP role with the Conant Auto Retail Group, overseeing 11 stores in two states. This included Norm Reeves Honda, the #1 Honda dealership in the world for the last 20 years. During Paul’s time at the organization, the CAR Group boasted annual unit sales of 32,000 and $900 million in sales revenue.

At the core of Paul’s success is his strength in leadership. He is a consistent mentor in his organization – modeling positivity, professionalism, and accountability. Paul’s commitment to helping others also reaches beyond the doors of the dealership, as he strives to help those in need in the surrounding community. His work with charitable organizations, faith-based organizations, and youth groups garners him the respect and admiration of local religious and civic leaders.

“It’s not over until you win.”

Whether the challenge he’s facing is at work or in the community, Paul adheres to the philosophy of another mentor, Les Brown, who says, “It’s not over until you win.” His work ethic and commitment to excellence, service, and leadership have made Paul White a visionary leader in the automotive industry and a champion for the people who work with him.

The Joyce and Thomas A. Moorehead Foundation

In addition to being the largest luxury car retailer in the region, Sterling Motorcars is committed to the community; they are known for their generosity of “giving back.” The Joyce and Thomas A. Moorehead Foundation was established in 2004, with a focus on higher education and a Therapeutic Riding Program in Great Falls, Virginia. The foundation has given nearly $6M in scholarship and emergency relief to well-deserving high school and college students since its inception. In addition to scholarships, the Mooreheads provided an athletic practice facility to Grambling State University in Louisiana; the university honored them by naming the facility after the two of them.

“This is what it’s all about, bringing other people up and giving something back…”

Corporate citizenship is very important to the Mooreheads. Because of his own humble beginnings in Monroe, Louisiana, Mr. Moorehead created this foundation, with his wife, to inspire low-income students in attaining their highest dreams. “This is what it’s all about, bringing other people up and giving something back,” states Thomas A. Moorehead.