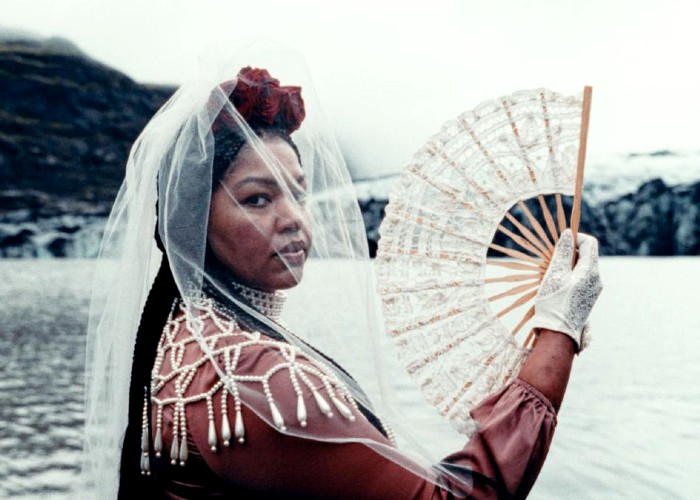 From May 9-15, 2022, Samantha Shay’s short film Mother Melancholia will be available for on-demand viewing via pay what you can, and all funds raised will go towards aiding the Ukrainian people.

The film is a multi-layered portrait of four women set to a soundtrack for the end of the world.

As part of the Under Construction Festival and in partnership with Tanztheater Wuppertal Pina Bausch, this special digital programming event will be available at bit.ly/MotherMelancholia.

“We stand in solidarity with the Ukrainian people. We also recognize that this war has received more attention than ongoing wars in non-Western countries. We condemn the war in Ukraine and all wars around the world. We also recognize that in times of conflict, marginalized people suffer disproportionately. Therefore, all proceeds from this stream will not only support the people of Ukraine, but some of the most disadvantaged, and will be split equally among three organizations: Outright International (Supporting the LGBTQ+ Community), Black Foreigners in Ukraine, Support Diabetics in Ukraine.” – On behalf of the Mother Melancholia team:

A self-proclaimed soundtrack for the end of the world as we know it, the dance film approaches patriarchal politics and ecofeminism through an unguarded, unsettlingly beautiful meditation on the difficulty, and immediacy, of being fully present in the world. Filmed in the surreal and eroding Icelandic landscape, Mother Melancholia is a quiet, yet urgent, conduit between the internal world of the human experience and the planet we inhabit.

“This film erupts from the music of my friend, the composer Sóley,” said Samantha Shay. “When she first came to me with the subjects of the marginalization of women and femmes and the destruction of the planet, it felt massive, and like it was not my place to make an opinionated statement about tragedies the world has yet to resolve. But I used the most intimate approach I could, looking through the lens of my own experience, and later through the experiences of the performers, I collaborated with. The piece became a constellation of how the personal resounds beyond human experience. What is the relationship between a melting glacier, and a personal trauma? Mother Melancholia is what resulted from traveling together, meditating on the Sóley’s themes, and from there, creating something that wove itself together through each of us.”

Preceding the on-demand screenings, the world premiere of Mother Melancholia will be in-person on May 7, 2022 at 9:45pm as part of the Pina Bausch Centre’s Under Construction Festival in Wuppertal, Germany. The screening will be introduced by the filmmaker Samantha Shay and will be followed by a Q&A with her and collaborator Barbara Kaufmann.

Tickets for the world premiere screening are €5 and can be purchased here.

Samantha Shay (director/performer) is a multidisciplinary artist, performer, director of theatre and film, and movement artist. As a creative instigator, catalyzer and master collaborator, her acclaimed body of work challenges traditional boundaries, creates new connections, and dances across the fault lines between disciplines.

She is currently a Fulbright Scholar working with Tanztheater Wuppertal Pina Bausch and will continue with the organization through the 22/23 season as a guest artist and researcher. Alongside her work with Wuppertal, received a Special Research Fellowship at the David Geffen School of Drama at Yale, where she will be integrating her work in dialogue with the traditions of the American Theatre.

Samantha often works with American and international artists, performers, and musicians, including as well as former and current members of such companies at Teatr ZAR, Batsheva Dance Company, and Gardzienice. Her theatrical work has been produced at The Grotowski Institute, the Theatre Olympics, RedCat, HERE Arts (New York), Tjarnarbio (Iceland), LungA (Iceland), and the Edinburgh International Fringe.

In 2016 her original piece, ‘of Light’, gained international attention when it was developed under the mentorship of Marina Abramović , endorsed by Abramović and praised by Björk in The Guardian. Two songs from the original score were released by Mute Records via composer KÁRYYN, with ‘Moving Masses’ named as Best New Track on Pitchfork.

From 2017-2019 Samantha’s original piece made in collaboration with The Grotowski Institute and Nini Julia Bang, A Thousand Tongues toured Europe and the US, receiving two nominations for Gríman – The Icelandic Theatre Awards – including Most Innovative Performance. She recently completed her first short film Homesick, in collaboration with Danielle Agami, and directed the digitally devised Zoom play In These Uncertain Times, in response to how the COVID-19 pandemic is impacting the arts.

The New York Times described the performance as “like a lyrical essay, poetic, emotive and fluid,” and it has been used as a resource by numerous academic and critical researchers as a pivotal theatrical work during the pandemic. She recently completed her next dance film Mother Melancholia co-commissioned by Tanztheater Wuppertal Pina Bausch, which premieres in the Spring of 2022.

Sóley Stefánsdóttir (composer) was born in Hafnarfjörður in Iceland and has attracted a huge following with her fairytale song-craft since launching her solo career in 2010 with the release of her EP Theater Island. Sóley’s fantastical sepia-toned alt-pop tunes continued with the release of her debut full-length album We Sink in 2011.

Receiving acclaim through her delicate compositions, soaked in dream-like qualities and dark surrealism, her song Pretty Face would go on to generate an enormous amount of buzz and legions of converts. Sóley would subsequently tour the USA’s East Coast as support on a sold-out run with fellow Icelanders Of Monsters and Men.

Having studied piano and composition at the Icelandic Art Academy, Sóley released the EP Krómantík in 2014, comprised of piano works originally composed for various theater and film productions, and returned to even darker, nocturnal themes with sophomore album Ask The Deep, which came out in early 2015. Following its release, she once again toured the world and supported John Grant for his UK shows in early 2016.​

On releasing her third album Endless Summer in Summer 2017, she left the darkness of Ask The Deep behind and focused on more organic acoustic arrangements. Endless Summer was written and recorded over the span of 12 months with a long-time friend and collaborator Albert Finnbogason. 2017 through 2018 saw Sóley collaborate with Sin Fang and múm’s Örvar Smárason under the moniker Team Dreams as of Fall 2018.

Sóley recently finished recording her fourth solo album, scheduled for release later in 2021. The album’s release will be supported and accompanied by an extensive run of European shows.

Breanna O’Mara (performer) is an international performer who was born and raised in Detroit, Michigan and graduated from The Juilliard School in New York in 2011, where she was the recipient of the Joseph W. Polisi Award.

She became a member of Tanztheater Wuppertal Pina Bausch in 2014, performing a wide range of works from the repertory, and is now the newest member of the Advisory Board to the Pina Bausch Foundation.

She herself has created performance pieces that have been presented in New York, Germany and Detroit. In 2009, Breanna founded the annual outreach program, Detroit Arts Immersion, which brought workshops as well as free performances to various communities in Detroit that had limited opportunities in the arts.

Chalia La Tour (performer) is a 2020 Tony nominee for her work in the critically acclaimed Broadway production of Slave Play and a recipient of the Antonyo award for Best Featured Actor in a Broadway Play. Originally from Stockton, California, La Tour is a multi-disciplinary artist in theatre, television, film and visual art. She is committed to work that promotes social justice and the intersections of humanity. Film: The Future is Bright, Love Repeat and Three Pregnant Men.

The Future is Bright had the honor of screening at the inaugural Smithsonian African American Film Festival. TV: The Good Fight, The Code and Elementary on CBS. Off-Broadway: Slave Play (New York Theatre Workshop), The Review or How to Eat Your Opposition (Women’s Theatre Project), The Danger: An Homage to Strange Fruit (JACK). Regional: Cadillac Crew (Yale Repertory Theatre), Cymbeline (Yale Repertory Theatre). La Tour is an alumna of the Yale School of Drama MFA Acting program and The British American Dramatic Academy.

Barbara Kaufmann (mentor and performer) came to dance via gymnastics. In 1977, Jessica Iwanson offered her a scholarship to study at the new Iwanson Dance Center in Munich, where she completed her training in contemporary dance.

From 1980 to 1982 she worked with Brigitta Trommler at the Tanzprojekt Munich for two years – an important and inspiring time.

During these early years of her career, Barbara Kaufmann regularly traveled to New York, Paris, and Stockholm to further her dance training. In 1984, she joined the Folkwang Tanzstudio, where she trained with Jean Cébron and Hans Züllig.

From here it was a small step to Pina Bausch and the Tanztheater Wuppertal. Six years after seeing the TV recording of The Rite of Spring for the first time, Barbara Kaufmann was now dancing in the piece on the stage of Opera House Wuppertal. She became a permanent member of the ensemble in 1987, and the film The Complaint of the Empress was her first creation with Pina Bausch.

In the early 2000s Pina Bausch made her an assistant director, and she began to take on new responsibilities as rehearsal director while still dancing in the company. She worked on re-stagings of The Rite of Spring, Iphigenia in Tauris and a reconstruction of the Tannhäuser-Bacchanal (1972) for the Folkwang Tanzstudio.

Over the years, her rehearsal director role grew to include several other pieces from the repertoire as well as the creation process of Rough Cut in Seoul. Switching roles in this way and working so closely with Pina Bausch gave her a new perspective on the pieces.

After Pina Bausch’s death and the formation of the Pina Bausch Foundation in 2009, Barbara Kaufmann’s role expanded again to include projects by the Foundation in the fields of archiving and documentation, video annotation, oral history, and the transmission of repertoire pieces to other companies.

In 2017, she was instrumental in re-staging The Rite of Spring for English National Ballet and in 2019, staged Iphigenia in Tauris for the Semperoper Ballett. In 2018, she was rehearsal director for Since she by the Greek director Dimitris Papaioannou, the first full-length production by a guest choreographer for the Tanztheater Wuppertal.

In 2011, she appeared in Wim Wenders’ film PINA. In 2012, her hometown Munich honored her with the Isadora dance award and in 2019. Now her passion for Pina Bausch’s art is fully focused on the practice of preservation and transmission, which requires great care and constant innovation.