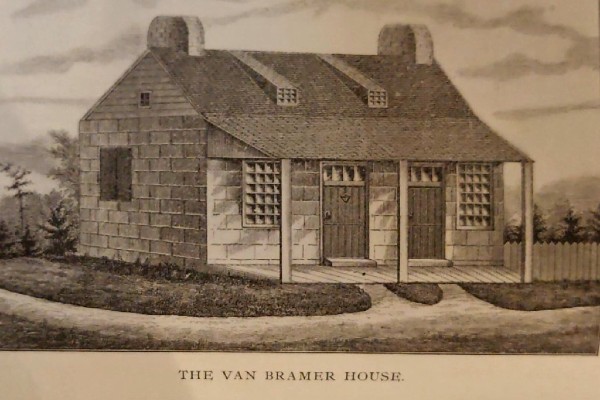 The oldest colonial (pre-Revolutionary War) house that remained by the end of the 19th Century in Harlem was the Van Bramer house.

Located near 7th Avenue and 117th Street in West Harlem. Unlike the Dyckmann House up in Inwood, this historic home was not saved.

Its gable end to the road, and front to the south. It was built not long before the Revolution, probably by Hendrick Van Bramer who lived there in 1774.

Fifteen years ago we noted: The front and the end were laid up of hammered red or freestone. Query, why were not all of stone? The oldest portion measured 18 by 31 feet; for the frame on the east end was modern. Its exterior was tasteful.

The eaves were the roof had a modern pitch; while the short beveled chimney tops, and the quaint dormer windows, with fiat roofs sloping downward toward the front, had a decidedly antique air.

The weather-beaten clapboards (on the rear and on the gable the eaves the same), were very thick, deep, and finished with large wrought nails.

The window sills, etc., were of black walnut; the half sash in a very old fashion, heavy. The loft was accessed by a perpendicular bare, vertical ladder.