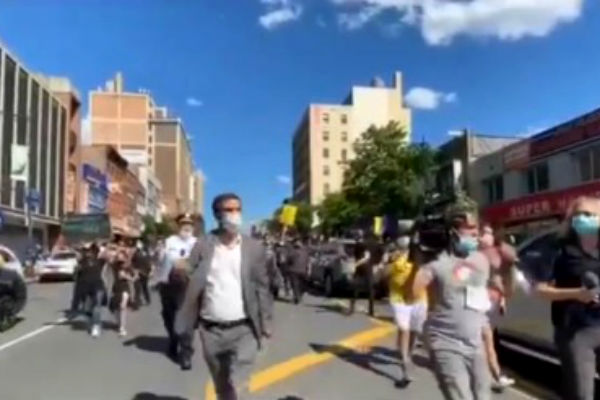 “The widespread protests occurring in our Nation right now should come as no surprise to anyone paying attention to the realities lived by people of color, especially Black Americans, in this country. People are fed up with a system built to benefit only one person, the White Man. We have to acknowledge that this social unrest stems from more than a reaction to the gruesome murder of George Floyd. This is about the over 400 years of oppression that the Black community has endured as a result of systematic and belligerent racism.

Every time a Black or Latino life is unjustly taken, we must make our voices heard. As I have always done throughout my life, I will continue to join the people in all peaceful demonstrations. We must not forget that this fight is also about addressing social inequalities and ending poverty. In this Nation, Black and Latino communities have suffered poverty at disproportionate rates, which has led to the deaths of hundreds of thousands because of COVID-19.

Our white progressive brothers and sisters must join us in this battle for justice, equality, and social and economic equity. Our white leaders from the Governor, Mayor, Comptroller, Speaker, and all Federal elected officials have to recognize the immense power they hold. Now more than ever they must stand with the Black and Latino communities and be on our side, fighting for justice for George Floyd and all the victims of police brutality and police murder. Officers must respect the right of the people to protest peacefully, without inflicting any harm or violence towards them.

I refuse to see a future in which my daughters will have to go through another George Floyd murder. I will continue to peacefully protest and get arrested as many times as it takes until we root out all forms of racism and white supremacy plaguing our country. As Reverend Martin Luther King said on August 23rd, 1963, ‘we have come to cash this check– a check that will give us upon demand the riches of freedom and the security of justice.’ We demand that the officers implicated in the death of George Floyd are brought to justice and that America finally recognizes the harm that decades of unjust laws and racism have had on all Black and Latino communities. Lastly, we must continue fighting for equitable representation in all branches of the government to lift our people out of this crisis.”