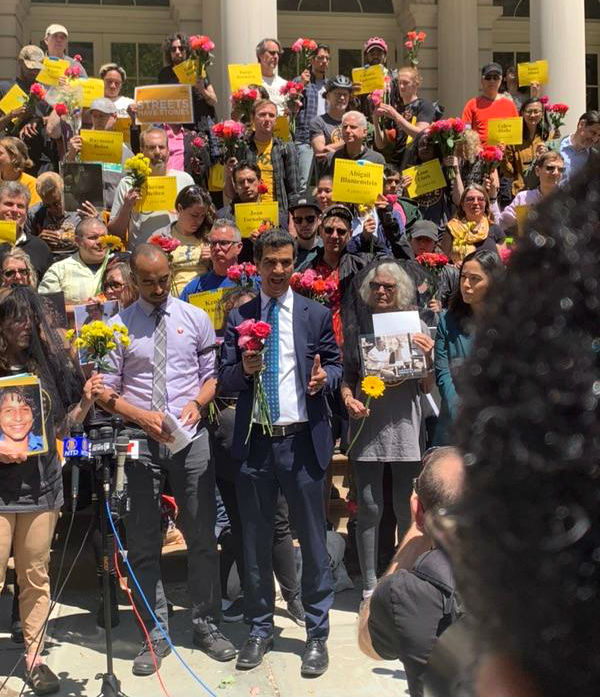 On Tuesday, May 7th, The Transportation Chairman, uptown Council Member Ydanis Rodriguez, Families for Safe Streets, Transportation Alternative, and advocates called on a reinvigorated Vision Zero plan to prevent future traffic fatalities. This year alone we have seen over 60 traffic-related casualties in New York City, a 30% increase from prior years. The Coalition is in support of legislation introduced by Council Member Ydanis Rodriguez (Intro. 322) that would require the Department of Transportation to develop a public checklist on street design elements that would enhance safety and consider them for arterial street design projects; the bill currently has 43 Co-Sponsors.

Intro 322, would put in place preventative measures that will ensure the city has a more comprehensive and robust plan to tackle traffic fatalities. The checklist would look at things like ADA accessibility, public amenities, protected bicycle lanes, dedicated mass transit facilities, dedicated unloading zones, narrow vehicle lanes, pedestrian safety islands, signal-protected pedestrian crossings, signal retiming, wide sidewalks, and any other appropriate street design elements. The Department of Transportation would then have to post the progress of each arterial design project, as well as justification as to why a specific project was not implemented.

This year alone we have seen more than 60 traffic-related casualties in New York City, that is an increase in over 30% from prior years. We have seen multiple fatalities involving pedestrians and cyclists in the city. Cities all over the country are also beginning to implement bike safety measures after the deaths of cyclists.

“A three-year-old is dead. A father of three is dead. That is just the toll of the past week. This is a public health crisis so urgent that not two days can pass without unsafe streets stealing another life. But the mayor doesn’t seem to be paying attention to his city, and his signature program is in a state of crisis,” said Amy Cohen, co-founder of Families for Safe Streets. “People are dying and suffering life-altering injuries. Enough is enough.”

“The system we have now for making streets safer just isn’t working. It is incumbent upon the mayor to capitalize on Vision Zero’s early success, double down on safety and empower the Department of Transportation to advance life-saving interventions wherever possible,” said Tom DeVito, Senior Director of Advocacy at Transportation Alternatives. “This is an emergency. There’s no room for debate, and no time for petty local politics.”

“This increase in traffic related fatalities is unacceptable, as the Chairman of the Transportation Committee I have made safety a top priority. That is why I have introduced legislation that would require the Department of Transportation to develop a public checklist of street design elements that would enhance the safety of our streets. It is our responsibility to ensure that out cyclists and pedestrians are protected,”

“This increase in traffic related fatalities is unacceptable, as the Chairman of the Transportation Committee I have made safety a top priority. That is why I have introduced legislation that would require the Department of Transportation to develop a public checklist of street design elements that would enhance the safety of our streets. It is our responsibility to ensure that out cyclists and pedestrians are protected,” said Chairman of the Transportation Committee, Council Member Ydanis Rodriguez.

“The New York City Council is committed to making our streets safer and breaking the car culture. Smart street design saves lives, which is why the Council will vote on the Vision Zero Street Design Standard bill at the end of this month. I want to thank all of the advocates for their tireless work in making our streets safer. Together we can and will make our streets better and safer,” said City Council Speaker Corey Johnson.

“The death of Aurilla Lawrence is all the more tragic because it could have been avoided if our city took more proactive measures to prevent traffic crashes,”

“We all know safety is a priority, and with traffic accidents on the rise, the time to act is now. Intro. 322 will standardize the City’s approach to street safety projects and complements efforts to protect pedestrians, drivers, and cyclists, I look forward to both increased and sustained work at hot-spots in my district and across the city. I commend Council Member Rodriguez for this legislation.” said Council Member Keith Powers

“Pedestrians and bikers know the dangers of our City streets all too well. I urge the passage of the Vision Zero Street Design Standard to hold our city accountable to improving safety on our streets, protecting New Yorkers, and actually meeting the goals of Vision Zero,” said New York City Comptroller Scott Stringer.

“New York City needs streets that are safe, walkable and bikeable to encourage residents to leave their cars at home and reduce pollution. We included Intro. 322 by Councilman Rodriguez in our Environmental Scorecard because it would result in more pedestrian-friendly and greener streets,” said Julie Tighe, President of the New York League of Conservation Voters. “We are proud to join Transportation Alternatives in calling for the City Council to pass this commonsense bill.”

“While Vision Zero is an admirable start, the problem remains that the NYPD is still motor vehicles. In their view anyone other than a driver is always in the wrong, it is always our fault. Wheelchair users and children often can not be seen from the drivers seat with the result that we are at risk of being sad statistic,” said Edith Prentiss, President of Disabled in Action.

“As someone who acquired my disability after being struck by a taxi while in the crosswalk with the light in my favor, I can attest to the need for safe streets,” said Susan Dooha, Executive Director of Center for Independence of the Disabled, NY. “This is a critical bill that would ensure that NYC DOT includes life-saving measures every time they redesign a major street. It includes ADA compliance for people with disabilities and opening up sight lines for drivers and pedestrians to see each other. We need to make city streets safer for everyone.”