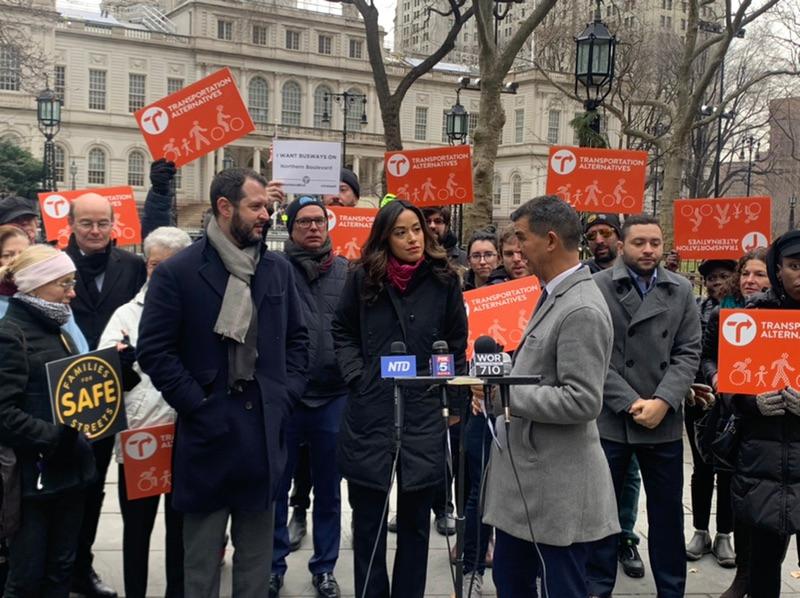 Today, December 16th, 2020, Council Member Ydanis Rodriguez Chairman of the Committee on Transportation held a rally, alongside Transportation Alternatives, to call on the City of New York to increase protections for cyclists and pedestrians. On Monday of last week, a 3-year-old child was hit and killed by a pick-up truck making a left turn on an intersection. The number of cyclists and pedestrians killed in the City is unacceptable and the coalition called for immediate action to address this issue.

The rally will also address the bills scheduled for the Transportation Committee hearing at 1:00 pm in the Council’s Chambers. Among them are the ‘Bike and Pedestrian Mayor’ bills, introduced by Council Members Rodriguez and Rivera as well as the ‘School bus Stop-Arm-Camera’ bill introduced by Council Member Kallos. Other bills include, Council Members Landers’s legislation related to safety training for street permits and the prohibition of on-call scheduling for utility safety workers that also would provide advance notice of work schedules.

“Just last week we saw a 3-year-old child hit and killed by a Pick-up truck making a left turn. We cannot continue hearing about these tragedies in a City that has been committed to ensuring the safety of all pedestrians and cyclists,” said Council Member Ydanis, Chairman of the Transportation Committee. “We must do more to keep all New Yorkers safe on the road. We must commit ourselves to be the most walkable pedestrian and cyclists friendly in the nation.”

“Children in our city have to be safe as they get on and off the school bus. It could be anyone’s child at risk from drivers speeding by,” said Council Member Ben Kallos. “We are all in a rush to get where we are going, but there is no excuse to put our children in danger. Stop-arm cameras will catch dangerous drivers and automatically issue fines to those who put children at risk by disobeying the law. Thank you Transportation Committee chair, Ydanis Rodriguez for hearing this bill and seeing its potential benefits.”

“Public policies have not worked for the hardworking pedicab drivers in New York. As working cyclists, we have been denied electric-assist legislation that would help improve our work and reduce the stigma we experience,” said, Eric Zoundi, Founder of New York Pedicab Alliance. “However, big cooperations are allowed to operation electric bikes and electric cargo bikes in this city. This is wrong, and it’s just one example among other injustices that the pedicab industry is experiencing. We want a bike mayor who will help improve the pedicab experience. Pedicab drivers need space to thrive as a normal mode of transportation in New York City.”

“The point of technology is to move us from a reactive way to a proactive way to addressing school safety,” said Bus Patrol CEO Jean Souliere. “We don’t need to wait for the worst to happen. 94%-98% of the violators who get a ticket via stop-arm camera programs don’t illegally pass a school bus a second time. I applaud Council Transportation Chair Rodriguez for his leadership on this critical legislation and Council Member Kallos for sponsoring it.”

Martin Treat is chair of CHEKPEDS said, “Intersections, where cyclists, pedestrians and vehicles meet, are the most dangerous. CHEKPEDS supports an office of pedestrian safety to protect us all.”

Jim Burke, Liaison and Member of Ciclistas Latinoamericanos said, “We desperately need this legislation. It’s time NYC puts the needs and safety for its pedestrians & bicyclists at the forefront. Our fellow NYers are dying in our streets – we need strong advocates inside City Hall. It’s a matter of life and death. We commend Ydanis Rodriguez for this bold step in giving a voice to NYers who have not been heard.”

“A new Office of Active Transport can help build a stronger consensus and coordination within city government to make bicycling viable transportation for more New Yorkers. The Dept of Transportation has accomplished a lot, but the city won’t become bike-friendly without other agencies pitching in. Police, Sanitation, Design and Construction and other city departments all have major roles to play in creating safe, bikeable streets.” Jon Orcutt, Communication Director, Bike New York