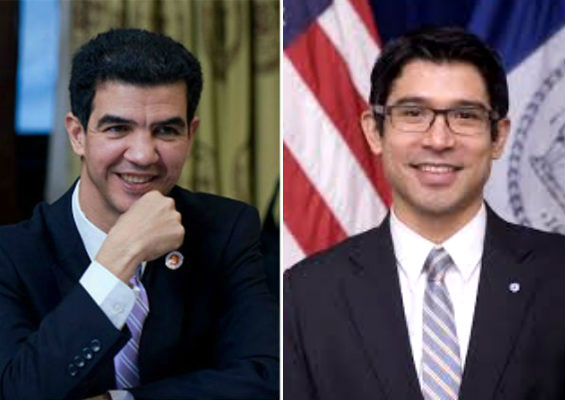 The resolution calls on the State Legislature to pass legislation guaranteeing driver’s licenses for all, regardless of immigration status. Council Member Ydanis Rodriguez worked in conjunction with members of the Green Light NY Coalition as the prime sponsor to introduce the resolution in the City Council. Council Member Carlos Menchaca joined the effort at the behest of advocates to shepherd the resolution through the Committee on Immigration, which he chairs, in preparation for a full Council vote lead by Council Member Ydanis Rodriguez . Guaranteeing driver’s licenses for all is a no brainer from transportation, economic, equity, and human rights perspective.

The New York City Council has the opportunity to support a progressive policy that will transform the lives of more than 570,000 undocumented residents in New York City by enabling them to apply for a driver’s license.

The New York City Council has the opportunity to support a progressive policy that will transform the lives of more than 570,000 undocumented residents in New York City by enabling them to apply for a driver’s license. Late last month, New York State Senator Luis Sepulveda and Assembly Member Marcos Crespo introduced S.1747/A.3675, which would authorize the State of New York DMV to permit undocumented immigrants to apply for driver’s licenses, with similar requirements for eligibility and auto insurance and privacy protections. According to the AAA Foundation for Traffic Safety 2011 report, unlicensed drivers are five times more likely to be involved in a fatal crash compared to their licensed counterparts. Endorsing the State bills S.1747/A.3675 will provide all New Yorkers an opportunity to become compliant with the State’s driving regulations, promoting traffic safety and accountability.

According to the Fiscal Policy Institute, passing this legislation would yield an estimated $57 million in combined annual government revenues, plus $26 million in one-time revenues projected as a result of people getting licenses and purchasing vehicles.

According to the Fiscal Policy Institute, passing this legislation would yield an estimated $57 million in combined annual government revenues, plus $26 million in one-time revenues projected as a result of people getting licenses and purchasing vehicles. The impact for those who could get licenses would be even more substantial: it will result in less employer exploitation, greater mobility, higher earnings, and shield immigrants from Trump’s deportation machine. Moreover, it will fulfill the promise of the DREAM Act by removing a significant obstacle that prevents undocumented students and first-time graduates from traveling to internships or job interviews. By allowing undocumented individuals or their family members to drive legally, educational and job opportunities will expand, and greatly lessen stresses that families of immigrants experience as they strive to contribute to our economy and our communities.

“I’ve been advocating for years on behalf of immigrants like myself to be able to participate as active, legitimate residents of the City of New York. This Council resolution supports a progressive state policy that will allow them to apply for their driver’s license, it will make our streets safer and it will recognize their contribution to our economy,” said Council Member Ydanis Rodriguez, Chair of the Committee on Transportation. “Drivers without proper licenses are more likely to be involved in fatal crashes and this new state law is in the best interest of all New Yorkers. 12 states, Puerto Rico and Washington D.C. have already enacted similar regulations. The legal precedent is set and the time is now to guarantee driver’s licenses for all, as it is consistent with the City and New York State’s commitment to welcome and protect all immigrants.”

By granting driver’s licenses to everyone again, regardless of status, we will not only eliminate another excuse to racially profile and police communities of color, but provide Dreamers a clear path to the educational and employment opportunities we enacted this year through the DREAM Act.”

“Guaranteeing driver’s licenses for all is consistent with New York State’s declaration of being a place that welcomes and protects all immigrants,” said City Council Member Carlos Menchaca, Chair of the Committee on Immigration. “We already had driver’s licenses for all in New York State prior to 2003. So this is not a new entitlement, but the restoration of an already existing right. By granting driver’s licenses to everyone again, regardless of status, we will not only eliminate another excuse to racially profile and police communities of color, but provide Dreamers a clear path to the educational and employment opportunities we enacted this year through the DREAM Act.”

“For far too many years, driver’s licenses remained out of reach for too many immigrants in New York State,” said Council Member Margaret S. Chin. “Driver’s licenses open up a world of opportunity,and denying them to the individuals who power the economic engine of this City and State is wrong and bad policy. As a proud immigrant myself, I am thrilled to join Council Members Rodriguez, Menchaca, and the Green Light Coalition in calling for the state legislature to finally provide driver’s licenses to immigrants regardless of their status. New York is not a place which punishes those who come here looking to take part in the American dream; we are a place that welcomes them.”

“We thank Councilmember Ydanis Rodriguez and the Immigration Committee’s leadership in supporting access to driver’s licenses, to address the issue of social and economic justice for immigrant New Yorkers. Every day, 800,000 undocumented New Yorkers are at risk of being turned over to ICE while driving to work, school, or the grocery store because they do not have access to a driver’s license. New York State has the opportunity to join twelve other states that have already expanded access to driver’s licenses regardless of immigration status, and pass this common-sense legislation that promotes the safety and economic growth of all New Yorkers. We call on the Governor and State Legislature to follow in the footsteps of the New York City Council, and take bold action to protect our immigrant communities in the wake of a federal attack,” said Steven Choi, Executive Director of the New York Immigration Coalition.

Yaritza Mendez, the Lead Organizer at Make the Road New York, said,
“In areas of New York City and rural communities throughout the State, public transportation is not reliable, and driving becomes essential in order to get around. On a
daily basis, undocumented residents struggle to get to work, places of worship, or take their children to school, all because they do not have access to a driver’s license. With the Trump administration constantly seeking every tool at its disposal to separate immigrant families, a routine stop can lead to immigrants driving without a license, being detained and put in a pipeline to deportation. By passing Res 100-A, our city will begin recognizing and protecting the lives of undocumented residents. Driver’s licenses for all will make our roads safer, and help families stay together.”

“As an organization that serves the Mexican community in New York City, we fully support the Driver’s License for all resolution. Our organization can speak first hand to the impact this proposal can have to our immigrant community. It will give them access and freedom to travel to work and school without any fear. We ask our City and State elected officials fully support this life changing resolution and bill,” said
Jairo Guzman, Executive Director of the Coalición Mexicana.

Resolution 100-2018 was passed in the Committee on Immigration by a 4-2 vote. It will now move on for a full vote by the City Council at Stated Meeting later this afternoon.