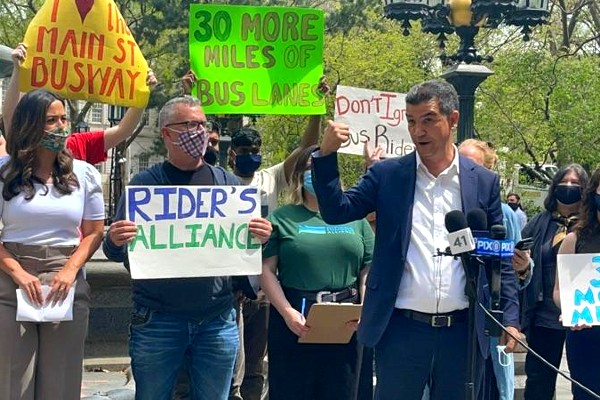 Did this by speeding up bus service with 30 miles of new bus lanes for the city’s riders, 75% of whom are low-income people of color.

Cumulatively, however, the program has not added up to the 25% citywide speed improvement Mayor de Blasio set out to achieve in January 2019.

Cumulatively, however, the program has not added up to the 25% citywide speed improvement Mayor de Blasio set out to achieve in January 2019.

“Bus riders need our mayor to deliver on his promise to end the tale of two cities and make New York the fairest big city in America,” said Riders Alliance Senior Organizer Jolyse Race. “With 30 new miles of bus lanes this year, the mayor can leave City Hall with a progressive legacy of putting riders first on busy New York streets. After several decades of transit inequity, the mayor can finally enact a remedy that recognizes the role of working-class bus riders in New York’s COVID response, economic recovery, and civic life.”

“… Bus riders come from predominantly Black, Latino, and underserved communities who have been living in transit deserts for years….”

“I will continue to work alongside Speaker Corey Johnson, Brooklyn Borough President Eric Adams, the Administration, Manhattan Borough President Gale Brewer, my colleagues and the Council, and most importantly Riders Alliance to ensure we reach out goal of completing 30 miles of bus lanes by the end of this year. Bus riders come from predominantly Black, Latino, and underserved communities who have been living in transit deserts for years. By improving our bus service we will help connect these New Yorkers to our mass transit networks. We need to leave a legacy behind and ensure we’re leaving the next administration with a blueprint so that the City can continue expanding and improving our bus services across the 5 boroughs for all communities,” said Council Member Ydanis Rodriguez, Chairman of the Transportation Committee. “We need to bring successful busway designs like the ones we see running on 14th street, Jay street, flushing main street, and as of Monday on 181st to other bus corridors that can benefit from these designs like Jamaica Avenue and Fordham Road.”

“…We applaud NYCDOT for the rollout of this lane, which promises to significantly improve travel times for riders in the Bronx and Washington Heights…”

“The launch of the 181st street busway brings another victory for bus riders who have been stuck with slow and unreliable service. We applaud NYCDOT for the rollout of this lane, which promises to significantly improve travel times for riders in the Bronx and Washington Heights. This means time savings that make it easier for everyday New Yorkers to get to work, school and to other appointments on time. Now is the time for the City to continue delivering for riders by committing to 30 miles of bus lane this year,” said Ashley Pryce, Senior Advocacy Associate, TransitCenter.

“Establishing a robust network of bus lanes is a critical part of ensuring that public transit is the most efficient mode of commuting in the post-Covid era,” said Liam Blank, Policy & Communications Manager for Tri-State Transportation Campaign. “If New York City fails to match the scale of its solutions with the scale of the problem, we risk losing our world-class status to competing cities who understand that efficient, green, and equitable public transit, more than anything, changes a place.”

Zeke Luger, the public policy intern with NYPIRG’s Straphangers Campaign, said, “With so much in flux in our city, we need Mayor de Blasio to set a clear precedent that bus riders are the priority on our streets by building out the sustainable infrastructure needed to bring crucial bus service improvements to more New Yorkers. We’re counting on the Mayor to leave a lasting legacy with his 2021 street painting season and roll out a full thirty miles of new busways and bus lanes this year.”

“An equitable recovery from COVID-19 depends on a robust and reliable public transit system. We have the opportunity this year to build a better bus network that centers equity and prioritizes corridors in areas with limited access to other transit options. I stand with Council Member Rodriguez and the Riders Alliance in urging the City to fulfill its promises to speed up its buses, so riders can get around more easily and efficiently,” said Brooklyn Borough President Eric Adams.

New Yorkers, particularly essential workers, have relied on bus transportation throughout COVID-19. We’ve seen the success of bus lanes used in new ways, such as the 14th Street Busway-continuing to expand our bus lane network and decongest our streets will support our recovery. I am proud to stand with my colleagues in this call to action,” said Council Member Keith Powers.

“Millions of New Yorkers depend on our City’s bus system, which continues to play a critical role in getting our essential workers to and from work every day during this pandemic. As more and more traffic returns to our streets, it is imperative for the City to give bus riders the fast and reliable service they deserve. I urge the administration to continue to build a strong network of bus-priority streets which will not only improve bus service, but will make New York City a more just, equitable, and sustainable City,” said Speaker Corey Johnson.

“Accessible and functional public transportation are one of the most important factors in our City’s recovery,” said Council Member Brad Lander. “Essential workers all over the City have been dependent on the City’s bus system to get to midnight shifts, grocery store jobs, hospital shifts, and back home to their families. Bus transit should be fast and effective, to accomplish this the City must invest in more bus lanes throughout the City as part of its recovery plan.”

During the pandemic, bus service has been a lifeline for essential workers. Last spring, lighter traffic resulted in much faster and more reliable bus service.

But without a strong network of bus-priority streets in place as the city recovers, mounting traffic congestion will cost bus riders time, add stress, strain household finances, and limit opportunity.

NYC DOT acted on this imperative by implementing 16 miles of bus lanes and busways since last June — the city’s fastest pace to date. The emergency conditions that prompted action last year persist today.

Bus riders need Mayor de Blasio and newly appointed Transportation Commissioner Henry Gutman to maintain the sense of urgency and possibility all the way through the mayor’s last year in office.

Recent progress on the bus lane network points to the huge opportunity to improve the bus rider experience during the home stretch of Mayor de Blasio’s tenure:

2021 is Mayor de Blasio’s last window of opportunity to improve the bus service that Black, brown, and low-income New Yorkers rely on.

The Bus Turnaround Coalition firmly believes that by building on recent wins, the de Blasio administration can make 2021 the most successful year yet for improving the experience of New York City bus riders.