Uptown’s Rodiquez And Others Call On The MTA To Fix The Transportation System Now! 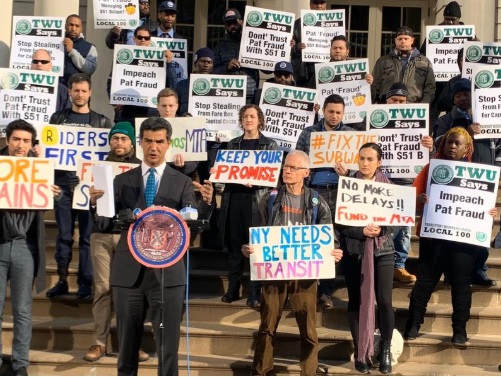 The Metropolitan Transportation Authority (MTA or Authority) is the largest transportation system in the United States serving over 2.5 million passengers daily. The MTA is one of the only transportation systems that run 24 hours per day everyday of the year. The MTA has introduced many plans to modernize and bring the transportation system to the 21st century. Their Fast Forward plan lays out a 10-year timeline to upgrading signals, making more stations accessible and resilient, and increasing transparency within the MTA.

During the month of July of this year with the help of consulting firm AlixPartners which the MTA partnered to create and approve their re-organizational plan. The plan consisted of 6 core recommendations:

AlixPartners mentioned that a possible outcome should the MTA adopt the recommendation would be the reduction of 1,900-2,700 employee positions. Advocates, workers and elected today rallied to protect the services and the workforce behind the nation’s largest transportation systems.

During the rally Council Member Ydanis Rodriguez urged the MTA to work alongside advocates and elected to make the Transportation system free for the working class and New Yorkers living in poverty. Additionally, they also called on the MTA to protect the employees who make the MTA system run 24/7 from layoffs.

“We are calling on the MTA to prioritize the working class, immigrant and underserved communities that are living in transit deserts and crumbling subway station. This is one of the largest plans in the history of the MTA, we need to see the repairs done first in the communities that have been left out in the past,” said Council Member Ydanis Rodriguez, Chairman of the Committee on Transportation. “We must ensure that while we are seeing the repairs across the city, it does not come at the expense of the riders or the workers. I will continue working with colleagues, advocates and transit workers to ensure we see no cuts and no layoffs”

Nick Sifuentes, Executive Director for the Tri-State Transportation Campaign said, “We are at a pivotal moment for our transit system. The next five years will determine whether we are able to rescue our subways, radically reshape bus service, and prepare our commuter rail systems for a new generation of growing ridership. It’s incredibly important that the MTA get this right, and that requires oversight and funding from elected officials at the state and city levels. We’re glad to see New York City Council continue to call on the MTA to improve the system and be transparent with riders about how those critical fixes will get done.”

“The City Council’s oversight hearing is an important opportunity for riders to hear more details about the MTA’s plans to fulfill the promises made in its largest ever $55B 2020-2024 capital program. With city capital dollars funding the plan, the Council is playing a proactive role to ensure implementation of the plan matches riders’ priorities, and we thank them for holding this hearing,” said Rachael Fauss, Senior Research Analyst, Reinvent Albany.

Colin Wright, Senior Associate, TransitCenter, said “We applaud the vision for the region’s transit system in the MTA’s proposed Capital Program. But the cost estimates for major projects in this capital program are significantly higher than what peer transit agencies pay for similar work. Getting MTA capital costs under control will require unflagging attention from the MTA and steadfast oversight from city and state authorities. There are no silver bullets, and this problem won’t be solved overnight. If the MTA successfully accelerates its construction work and reins in capital costs, all New Yorkers will benefit.”

“New Yorkers are counting on the MTA to put forward a capital plan that makes smart investments in public transit and wins back riders who have increasingly turned to cars in recent years. This can’t be the greatest city in the world if our transportation network doesn’t prioritize affordable, equitable and efficient mobility options for all,” said Transportation Alternatives Senior Director of Advocacy Thomas DeVito.