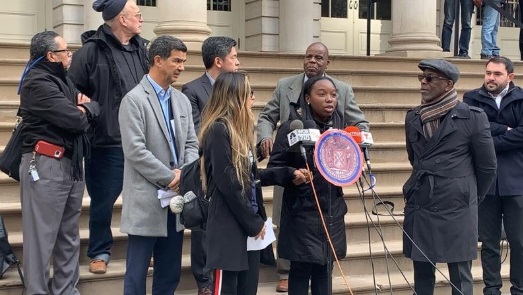 Today, Co-Chairs of the Black, Latino, and Asian Caucus, uptown Council Member Ydanis Rodriguez and Council Member Daneek Miller were joined by many others.

The group included the Office of Manhattan Borough President Gale Brewer, Ravi Ragbir of the New Sanctuary Coalition, Make the Road NY, New York Immigration Coalition, University Student Senate, DACA recipients and many other advocates as they called on the U.S Government to support the DACAmented community as they await to hear the Supreme Court’s ruling on pending litigation.

The United States is long overdue for a comprehensive immigration reform the likes of which haven’t been seen since the Immigration Reform and Control Act of 1986. Hundreds of thousands of students who are current recipients of DACA are awaiting to hear the Supreme Court’s decision on the justification of the DACA shutdown by the Trump Administration.

Ensuring the survival of the Deferred Action for Childhood Arrivals (DACA) program is the least the country should be doing to help the undocumented and documented immigrants currently residing in the United States. At a time when immigrants are constantly under attack, we must stand alongside our brothers and sisters to ensure they are treated fairly and their basic rights are respected.

“We need a new immigration reform plan, one that will serve all immigrants! We have not seen a comprehensive immigration reform plan since Reagan passed his Immigration Reform and Control Act of 1986,” said uptown Council Member Ydanis Rodriguez, Co-Chair of the Black, Latino, and Asian Caucus. “We must not stand in the sidelines as the DACAmented and immigrant communities are being attacked and further disenfranchised. I am proud to be an immigrant myself and I will continue advocating for the rights of the working class and poor immigrants across our nation.”

Sari Mendoza, DACA Recipient and Student Activist, said “I am one of the 700,000 DREAMers who at this moment are losing hope, are giving up, and feel lost. It is imperative that we call the U.S. Governement to take action now. We need an immigration reform now!”

Martin Batalla Vidal, lead plaintiff in McAleenan v. Vidal and member of Make the Road New York, said “DACA allowed me to go to school, obtain a job in my chosen career and provided me with relief to remain together with my family and community. We are hopeful that the court sees how DACA changed this country, transformed the lives of hundreds of thousands and rules on the right side of history. But, no matter what the court decides the fight is not over. The fight is bigger than just DACA- the fight is to ensure full protection for the 11 million undocumented immigrants across the country because our home is here.”

Steve Choi, Executive Director of the New York Immigration Coalition, said, “For nearly two years, more than 40,000 New Yorkers have been held in limbo by the Trump Administration, who has cruelly used them as political pawns in the President’s sick game. As a result, New Yorkers who came to the United States as children, are at risk of being separated from their families, their communities, and the only place they have ever known as home. We rallied today at the Supreme Court to tell our Supreme Court Justices that America is our home and New York’s immigrants are here to stay. The fate of hundreds of thousands of children and families from across the country is in their hands.”

“Oppression towards one is a oppression to all. Just last week I met with two CUNY students who are lead plaintiffs on the case that will decide the future of DACA ; Martin & Antonio. It was truly inspiring and moving to hear their stories, and stories across CUNY , New York State and throughout the nation. Our call to action is now and we must be on the frontline advocating for comprehensive immigration reform and advocating for what is right,” said Juvanie Piquant, Legislative Vice-Chair for the CUNY University Student Senate. “CUNY and the University Student Senate is here with you along this fight. We must be persistent and diligent and advocate for our brothers and sisters. To any DACA recipients you are not alone. We must be the change makers and use our voice to ensure a better tomorrow.”