Uptown’s Jackson, Rosenthal And Others File Amicus Brief In Support Of LGBTQ Workers 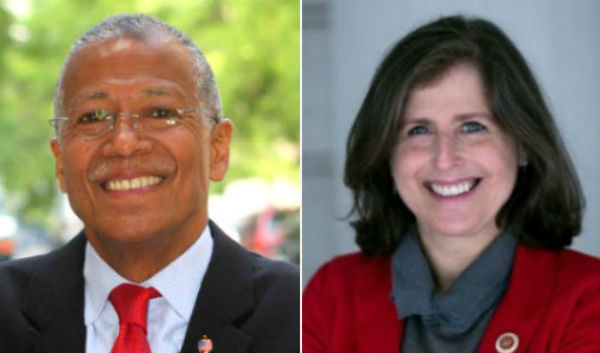 The de Blasio Administration today announced New York City, Los Angeles and a coalition of 66 local governments across the nation have filed an amicus brief with the U.S. Supreme Court.

The case is in support of three LGBTQ employees in their legal fight to remain covered by Title VII of the Civil Rights Act, a federal law that prohibits sex-based discrimination in the workplace.

“As home to the largest LGBTQ community in the country, New York City will never stand idly by while someone is made to feel less than just because of who they are,” said Mayor Bill de Blasio. “Who someone is will never be an acceptable excuse for firing someone, and I will always stand with working people to call out and fight discrimination as long as it exists.”

“No one should be denied access to employment and financial security because of who they are, and in New York City, we have worked hard to enforce what is morally, ethically and legally right,” said First Lady Chirlane McCray. “We are proud to join cities across the country in the fight to protect the civil rights of LGBTQ workers. No matter the outcome of this case, our City’s anti-discrimination laws will stand.”

“New York and other cities have been in the forefront of protecting workers against discrimination on the basis of sexual orientation and gender identity” said Corporation Counsel Zachary W. Carter. “As detailed in our brief, when LGBTQ employees are protected from discrimination and have equal access to facilities and other accommodations, we build a stronger sense of community in the workplace. We join in arguing that the Supreme Court should affirm the long accepted view that Title VII protects LGBTQ workers.”

Regardless of how the Court rules, New York City will continue to enforce its own antidiscrimination and equal employment laws, which explicitly prohibit discrimination on the bases of sexual orientation, gender identity and more. In filing this brief, New York City and Los Angeles, joined by 66 other local governments, argue that removing the protections for gender identity and sexual orientation from Title VII would inhibit the efforts of local governments across the country to protect LGBTQ individuals from discrimination in the workplace to the fullest extent possible.

“New York City has outlawed discrimination in employment, housing, and public accommodations on the basis of sexual orientation since 1986 and on the basis of gender identity and expression since 2002,” said Carmelyn P. Malalis, Chair/Commissioner of the NYC Commission on Human Rights. “It is past time our country takes up this mantle and confirms that these protections exist within the Civil Rights Act of 1964. It is impossible to discriminate against LGBTQI people without implicating their sex or gender—classes already protected under Title VII. We urge the Supreme Court to codify these protections and prohibit anti-LGBTQI discrimination in the workplace.”

“No one should be discriminated against based on their race, religion, sex, sexual orientation or gender identity—in the workplace or anywhere,” said Department of Consumer and Worker Protection Commissioner Lorelei Salas. “If the Supreme Court excludes LGBTQ employees from this worker protection law, it is not only shameful but a violation of their human rights. I’m proud to live and work in a city that will fight to protect its vibrant LGBTQ community and their employment rights.”

“New York City has proven that protecting LGBTQ communities from employment discrimination is not only possible, it is an essential component in creating more meaningful economic justice and equity for our communities,” said Ashe McGovern, Executive Director of the NYC Unity Project. “We are proud to join with jurisdictions across the country in the fight to ensure that our statutory and fundamental constitutional rights, which have already been affirmed by courts nationwide, continue to be upheld.”

“Access to employment is critical for all New Yorkers to achieve financial independence and secure housing – which are important priorities for our agency,” said Department of Social Services Commissioner Steven Banks. “We are proud to be part of this Administration’s commitment to advance equality for all and to ensure that LGBTQ employees are free from discrimination in the workplace.”

“It’s only common sense that the LGBTQ community be extended the same rights and protections from discrimination that others already enjoy,” said Manhattan Borough President Gale A. Brewer. “We can hope that the Supreme Court will view this case through the lens of common sense. I’m grateful that New York and other local governments across the country have filed briefs in support of our point of view,” said Borough President Gale Brewer.

“Every employee across the nation, no matter what their sexual orientation or gender expression and identity is, deserves to work in an environment that values inclusivity and is enforced by federal law. At the state level we have made incredible strides in passing legislation that protects LGBTQ New Yorkers against discrimination and harassment in the workplace – we cannot afford to have those protections contradicted by backward changes at the federal level. I strongly support LGBTQ employees in their legal fight to remain covered by Title VII of the Civil Rights Act, and urge the United States Supreme Court to reject anything less than the full protection of the LGBTQ community,” said State Senator Alessandra Biaggi.

“We are stronger when LGBTQIA New Yorkers have strong protections from workplace discrimination reinforced at the federal level. Every person, regardless of who they love or what gender they identify as, has the right to contribute to the economy, support themselves and reach their full potential. I urge the court: Don’t take us backwards,” said State Senator Andrew Gounardes.

“I fully support this amicus brief. I believe in workers rights for all and, as a labor organizer for decades, I have experienced the need our LGBTQ siblings have for special protections against discrimination in the workplace. For the sake of all my LGBTQ constituents, it is my hope that the highest court in our land will uphold these important Title VII protections,” said State Senator Robert Jackson.

“New York City has consistently sought to protect the rights of the LGBTQ community and has lead the nationwide initiative to eradicate workplace discrimination. I strongly support the Amicus Brief filed by the City supporting the Plaintiffs in these anti-discrimination cases and in opposition to those employers who seek to narrow already-existing federal law in order to exclude LGBTQ workers from discrimination protections. It is time that the rest of the country catch up to New York City and take a greater initiative to protect LGBTQ individuals in the workplace, as well as in their communities,” said Assembly Member Catalina Cruz.

“It is a little hard to believe that in this day and age we are still fighting about whether an employer is allowed to discriminate against somebody for whom they love or how they identify themselves. I hope the Supreme Court rules on the right side of history and in support of LGBTQ+ rights nationwide, and am proud that New York has already taken important steps to protect these rights here at home,” said Assembly Member Jeffrey Dinowitz.

“Full equality in the workplace ensures that economies are strong, workers are protected, and our society grows to allow all citizens to rise to higher levels of achievement and security. No one should face the possibility of losing a job or be threatened with unemployment because of sex-based discrimination. New York City is an amici participant in this initiative because we value anti-discrimination measures that ensure residents are safe and protected in the workplace,” said Assembly Member Deborah Glick.

“Federal law shouldn’t be re-interpreted by the Trump administration to deny LGBTQ individuals protection from losing their jobs or being discriminated against in the workplace. New Yorkers know that all of us win when bigotry loses, and I’m proud of New York City for standing up for what’s right by submitting this amicus brief to the U.S. Supreme Court,” said Assembly Member Richard N. Gottfried.

“No group should be subject to discrimination in the workplace including LGBTQ workers who have faced many hardships. Diversity in the workplace is one of our country’s great strengths and we are constitutionally obligated to eradicate discrimination based sexual orientation and gender identity,” said Assembly Member David I. Weprin. “LGBTQ rights are human rights and I urge the Court to uphold protections for workers under Title VII of the Civil Rights Act.”

“I wholeheartedly support the City of New York and other local governments in their fight to defend current protections for LGBTQ+ workers. Eliminating the inclusion of LGBTQ+ people under Title VII violates the letter and spirit of the law, and is a massive step backward for our country. Attempts such as these to roll back the hard-won civil rights gains of the last half-century will ultimately be unsuccessful,” said Council Member Helen Rosenthal, Chair of the Committee on Women and Gender Equity.