Uptown Rep Rodriquez, Other Electeds And Riders Respond As Transit Tour Wraps Up 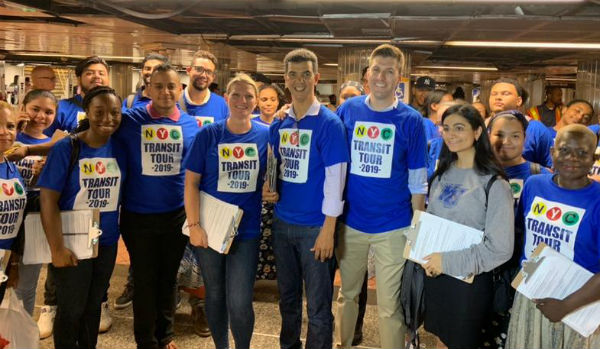 Transportation Alternatives, 350 Action, Transit Center, Tri-State Transportation Campaign, MTA representatives, and community activists discussed their experiences riding the transit system for this year’s Annual Riders Respond Transit Tour. Council Member Ydanis Rodriguez alongside Speaker Corey Johnson, and numerous elected officials surveyed over hundreds of New Yorkers and asked them about the issues affecting them while riding the New York’s subway system. The closing press conference discussed productive ways in which the City can move forward with the findings yielded by the transit tour.

They were joined by other elected officials, advocates and volunteers, riding from station to station to document feedback from commuters, hearing directly from riders about conditions in the transit system, and assess the repairs and enhancements made since last year.

Volunteers were a vital element to the success of the Transit Tour. Close to 100 volunteers from a diverse group of organizations joined us this year as we traveled throughout the New York’s Transit System. Over the course of two days, traveling across all five boroughs and after two thousand surveys conducted, the 2018 Riders Respond Transit Tour has concluded. The data gathered will be analyzed and presented at a future Committee on Transportation hearing.

Council Member Ydanis Rodriguez, Chairman of the Committee on Transportation said, “The Annual Transit Tour allows us to hear directly from commuters regarding the state of our subway transit system. Last year, we surveyed hundreds of New Yorkers, the feedback received gave us insight into what we needed to address and exposed many of the issues affecting our straphangers. This year, we will once again take to the subways and speak with hundreds more, in order to determine the most pressing issues impacting riders. I thank all my colleagues at the Council, Speaker Corey Johnson, MTA President Byford, Transit workers and advocates and NYC riders for joining us for our Third Annual Riders Respond Transit Tour”

Speaker Corey Johnson said, “The subway system is the lifeblood of our city and for far too long it just hasn’t been good enough for New York to truly thrive. As we fight to make the subways better, it is critical that elected officials ride along with and hear directly from straphangers. I congratulate Council Member Rodriguez on his third annual Riders Respond Transit Tour and I look forward to continuing to work with him and our colleagues in the Council to make it easier for New Yorkers to get around our city.”

Assemblymember Deborah J. Glick said, “While the MTA and NYCT are working hard to make improvements, the experience of riders is still far from what it needs to be. With a continued infusion of resources, New Yorkers have a right to expect better results.”

Liam Blank, Advocacy & Policy Manager for the Tri-State Transportation Campaign said, “We’re glad to take part in Council Member Rodriguez’s Rider Response Transit Tour, helping to bring the voice of commuters to City Council. To make substantive improvements to the city’s transit system, our elected leaders must ride the buses and subway themselves and hear from daily riders about what needs to be done. Not only is the information gathered on this tour useful for tracking the MTA’s performance, it’s also beneficial for restoring the public’s faith in the system.”

Assemblyman Jeffrey Dinowitz said: “For the third year in a row, I am proud to join Council Member Rodriguez on his 24-hour Riders Respond Transit Tour. As we approach the MTA’s release of their proposed 2020-2024 Capital Plan, ensuring that riders’ voices are heard is of critical importance. I expect to hear more demands for station accessibility and modernized signals, among other concerns. It’s long past time for the MTA to deliver New York the transit system we deserve.”

“New York as we know it couldn’t exist without the subway,” said Manhattan Borough President Gale A. Brewer. “The transit crisis is not over, and I’m proud to support Council Speaker Johnson and Councilmember Rodriguez’s Riders Respond Transit Tour so we can continue to find solutions that work.”

New York City Comptroller Scott M. Stringer said, “For too long, riders have dealt with frustrating commutes marked by delays and dysfunction. If New York is going to remain a world-class city, we need a world-class transit system. To build the transit future New York City deserves, we have to hear directly from everyday New Yorkers – and that’s what this event is all about. I applaud my colleagues for hitting the streets and hearing from those whose voices matter most.”

State Senator Jessica Ramos said, “In January of this year, we held a Legislative joint hearing where the President and Managing Director of the MTA testified about the importance of including their funding in the FY19-20 Executive Budget. This is why this 24hr Transit Tour, led by Councilmember Ydanis Rodriguez, is a great opportunity to hear from my neighbors about their experience and ways that we can hold the MTA accountable to the repairs we desperately need.”

Senator Robert Jackson, who represents northern and western Manhattan, said: “We all need to do our part to hold the MTA accountable for the mass transit services we New Yorkers rely on them to provide. As Chair of the Cities Committee in the New York State Senate, I feel strongly that we must be proactive and collaborative in planning for a better and more equitable transit future. I thank Council Member Rodriguez for his advocacy work as Transportation Chair and hope this Transit Tour sheds light on where the MTA can improve and how we can support them.”

“I am excited to once again join my dear colleague and Transportation Chair Ydanis Rodriguez to discuss the needs of western Queens commuters,” said Council Member Costa Constantinides, District 22. “This enables us to hear directly from riders, to get a better on-the-ground understanding of how our transit system can improve.”

“New York City’s subway system needs to work better for New Yorkers; even though we have seen some improvements, we are aways to go from where we should be,” said Council Member Ben Kallos. “The ‘Riders Response Tour’ is a great way to get a real good idea and understanding of what the MTA’s condition is every year. Thank you to Council Member Ydanis Rodriguez for his leadership in organizing and pushing for this tour to take place.”

“The greatest city in the world deserves to have the greatest transit system in the world. But what we’ve got is anything but,” said Transportation Alternatives Senior Organizer Erwin Figueroa. “We thank Council Member Rodriguez for making transit a priority, and look forward to learning from riders how the system can better serve them.”

Smitha Varghese, Legislative Director for the University Student Senate said “The MTA has been in a state of disarray for quite some time now. Today, electeds, community members and students alike will be shedding light on the state of our subway while surveying the public to gather input from everyday riders,”

Danny Pearlstein representative of the Riders Alliance said “With millions of riders depending on subways every day, Council Member Rodriguez’s Riders Respond Transit Tour connects elected leaders with constituents on a crucial issue in so many people’s lives. Though the transit system is no longer mired in crisis, and performance is improving, riders are still waiting for reliable, fast, and accessible service. Recent power outages, floods, and signal meltdowns remind us of the challenges that still face our public infrastructure. As Governor Cuomo prepares the next MTA capital plan, riders are demanding that money from congestion pricing is spent on modern signals, new subway cars, and elevators in hundreds of upgraded stations citywide. Thanks to Council Member Rodriguez and his colleagues in government for amplifying these critical needs.”