Uptown Rep Rodriguez, On Nations Largest Public Cementary Will Finally Get The Respect It Deserves 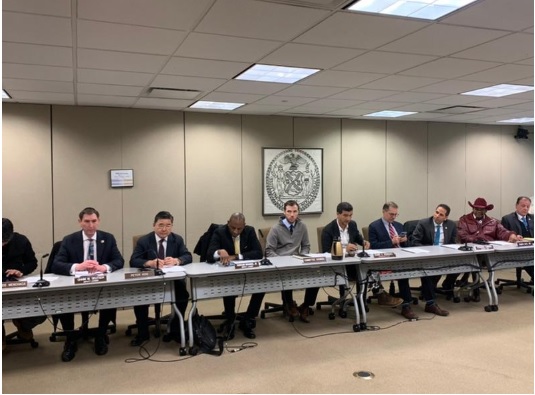 I would like to thank Melinda Hunt from the Hart Island Project for being here today. She has testified and stood firmly supporting these bills for years.

More than a million people lay to rest in Hart Island, the nation’s largest Potters field. Mass burials began in the 1870s with its original intention to be that of a burial ground for mostly Black, Latino, immigrants and the poor who could not afford the expensive costs of being buried in another gravesite.

This is about giving respect and dignity to the people who are buried on the island and the family members who must go through a lengthy and at times complicated process to be able to visit their loved ones who are buried there.

Over 60% of the people buried at Hart island are there because a family member requested it. I think that the majority of the time this is because they cannot afford to be buried at another cemetery.

I would like to acknowledge the hard work and dedication of former Council Member Elizabeth Crowley to ensure we move forward with these bills.

I would also like to acknowledge the support of my colleagues, Speaker Corey Johnson, Mark Levine, Deborah Rose among many others. We would not have been able to arrive to this point without the support from all of these stakeholders.

Today the committee will be voting on Proposed Intro. Number 909-B, which I am the prime sponsor of. This bill would require the Department of Parks and Recreation, or another agency or office designated by the Mayor, to consult with the Department of Transportation to develop a plan to provide or ensure the availability of public travel, including ferry service, to and from Hart Island.

We must provide the proper modes of transportation for the family members and loved ones to be able to visit their deceased.

Along with this legislation, at 2 PM today the Committee on Parks and Recreations chaired by council member Peter Koo will be voting on Intro. 906 which I am the prime sponsor of.

This bill has been strongly supported by Speaker Corey Johnson and many advocates. Intro 906 will finally change the control of the Largest public cemetery in the nation from the Department of Corrections to the Department of Parks. Hart island which has over 1 million bodies must not be guarded by correctional officers.

We need to make Hart Island a place of peace where people can go and pay their respects to their loved ones. The time has come today to open the cemetery to the loved ones and family members. We must turn Hart island into a proper final place of rest.

I would like to once again thank the leadership of Speaker Corey Johnson, who cares deeply about the future of Hart Island and has made this issue a priority.