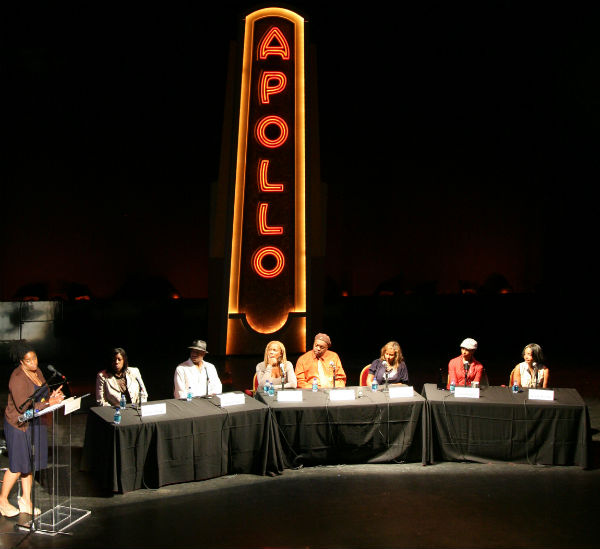 On Thursday, August 15, 2019, at 7:00 p.m., the Apollo Theater in partnership with Spectrum News NY1, WLBS, and New York Amsterdam News will present Apollo Uptown Hall: Harlem’s Culture – Past. Present. Future. The panel will gather thought leaders from some of Harlem’s most influential arts organizations to celebrate milestone anniversaries in the Harlem arts community and discuss the roles these cultural organizations will play in either preserving traditions or advancing change. The event is free with RSVP.

The event will close with a performance by the Brooklyn United Marching Band and a special presentation by Keisha Sutton-James, granddaughter of Harlem politician Percy E. Sutton.

Apollo Uptown Hall: Harlem’s Culture – Past. Present. Future. is free and open to the public, but RSVPs are mandatory at: http://apollotheater.org/uptownhall

The Apollo Theater continues to be a gathering place and “town hall” for local community residents as well as people from all across New York City. This led to the creation of Apollo Uptown Hall, which creatively and uniquely weaves panel discussions, video, texting, and live performances to enhance and develop an interactive forum for the community to discover and/or address key issues. For more information, visit www.apollotheater.org.

With music at its core, the Apollo’s programming extends to dance, theater, spoken word, and more. This includes special programs such as the blockbuster concert Bruno Mars Live at the Apollo, the world premiere theatrical reading of Ta-Nehisi Coates’s National Book Award-winning Between the World and Me, 100: The Apollo Celebrates Ella, the annual Africa Now! Festival, and the New York premiere of the opera We Shall Not Be Moved. The Apollo is a performing arts presenting organization that also produces festivals and large-scale dance and music works organized around a set of core initiatives that celebrate and extend the Apollo’s legacy through a contemporary lens; global festivals including the Women of the World (WOW) Festival and Breakin’ Convention; international and U.S.-based artist presentations focused on a specific theme; and Special Projects, multidisciplinary collaborations with partner organizations.

Since introducing the first Amateur Night contests in 1934, the Apollo Theater has served as a testing ground for new artists working across a variety of art forms and has ushered in the emergence of many new musical genres—including jazz, swing, bebop, R&B, gospel, blues, soul, and hip-hop. Among the countless legendary performers who launched their careers at the Apollo are Michael Jackson, Ella Fitzgerald, Stevie Wonder, Billie Holiday, James Brown, D’Angelo, Lauryn Hill, Dave Chappelle, Machine Gun Kelly, Miri Ben Ari, Sarah Vaughan, Gladys Knight, and Luther Vandross; and the Apollo’s forward-looking artistic vision continues to build on this legacy. For more information visit https://www.apollotheater.org/.