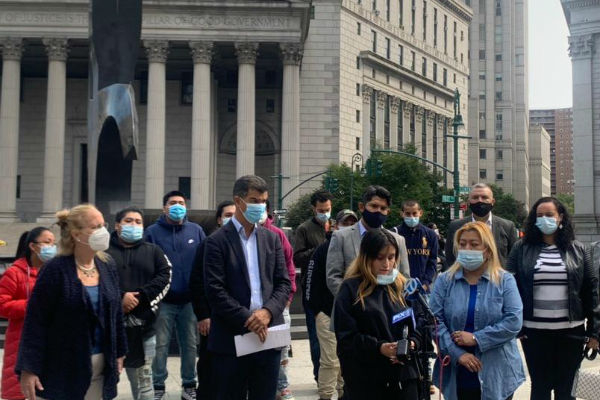 The press conference was held to discuss the increasing number of ICE arrests and deportation cases happening across the Nation and in the City. Jointly with other elected officials and advocates, they called on the immediate release of Fernando Santos-Martinez who is currently held at a Hudson County ICE facility. They will be demanding an end to the misleading and deceptive tactics which are currently used by Immigration officers forcing New Yorkers to comply with their orders.

On Thursday morning, at 95 Thayer St, at approximately 6 A.M., plain cloth ICE officers, identifying themselves as police officers with the 34th precinct, attempted to enter Maria’s (Partner of Fernando Santos-Martinez) apartment. After multiple failed attempts, they asked the building superintendent to convince Maria to open her door. Upon entering, officers showed Maria a barely visible, crumpled up paper with a photo of another man who the officers identified as Fernando Santos-Martinez.

The officers proceeded to call and ultimately detain Fernando Santos-Martinez at his workplace in Harlem.

Unknowingly, Maria provided officers with her husband’s phone number after officers mentioned they only wanted to speak to him about a prior incident. The officers proceeded to call and ultimately detain Fernando Santos-Martinez at his workplace in Harlem.

The coalition will be denouncing the Trump administration’s recent attempts to increase ICE presence and detainments in sanctuary cities. Local elected officials and advocates will be sharing important information to ensure all New Yorkers, especially those living in immigrant communities, are protected and safe.

Most troubling is the knowledge that ICE has been deceiving families into believing they are NYPD Officers.

“”It is a shame the Trump administration has continued to use ICE as a way to traumatize and separate thousands of undocumented families across the country. Most troubling is the knowledge that ICE has been deceiving families into believing they are NYPD Officers. This is completely unacceptable and a violation of the rights of hundreds of undocumented families residing in the City. The City of New York needs to take legal actions against ICE for falsely identifying themselves as NYPD officers when they are going after fellow New Yorkers,” said Council Member Ydanis Rodriguez. “This is a desperate attempt by Trump to attack our undocumented brothers and sisters and motivate his anti-immigrant racist base. We need to make sure every single immigrant family is protected and can remain together. The Trump administration has made it clear that he is willing to put his political agenda above the rights of our most vulnerable communities.”

Council Member Carlos Menchaca, Chairman of The Immigration Committee said, “There’s no question that the increase of ICE raids are part of Trump’s re-election strategy to put fear in our communities and hold on to power. Trump continues to use ICE as a tool to further a white supremacist agenda. It is especially vile to tear families apart that are already facing the brunt of a pandemic as essential workers serving their community. Fernando Santos-Martinez, a hard worker and family man, was tricked by ICE by posing as the NYPD and arrested him at work. The NYPD must end any sort of cooperation with ICE and denounce their practice of impersonating local police. This further erodes trust in the police, NYPD and the city must end this deceitful practice. We demand freedom for Mr. Martinez and an end to this terror by ICE who should be abolished.”

“We are witnessing the consequences of the continued horrific immigration agenda of this administration. ICE is an agency which props up this administration’s mission to separate families as a deportation machine. The trauma, fear, and harm inflicted on Mr. Santos and his family in my district this week speaks to the utter failure of this administration to act from a place of honesty or compassion. If we want to ensure that NYC remains a true sanctuary city we must ensure local accountability here at home so that there is no coordination between local law enforcement and ICE. We must also call out and abolish ICE’s use of tactics to mislead our communities by impersonating local enforcement” said Assembly Member Carmen De La Rosa. “I look forward to working with advocates to continue supporting the Santos family and the millions of Immigrants in our City and State.”

I am introducing legislation to ban ICE from impersonating local or state law enforcement. We’ve seen this trick too many times to let it happen again.

State Senator Robert Jackson said, “What happened to Maria and Fernando is appalling. My heart goes out to them and to other families who have been torn apart by ICE activities in our city. I am introducing legislation to ban ICE from impersonating local or state law enforcement. We’ve seen this trick too many times to let it happen again. All New Yorkers deserve the right to live without fear of ICE. We must do everything in our power, especially during this pandemic, to ensure our city is truly a Sanctuary.”

Council Member Brad Lander said, “Using deceptive tactics to entrap New Yorkers and tear apart families is a cruel escalation of ICE’s tactics to terrorize immigrant communities. We won’t stand for it, ICE has no place pretending to be NYPD, and we must continue to strengthen sanctuary city policies to end coordination between NYPD and ICE that makes our communities less safe.”