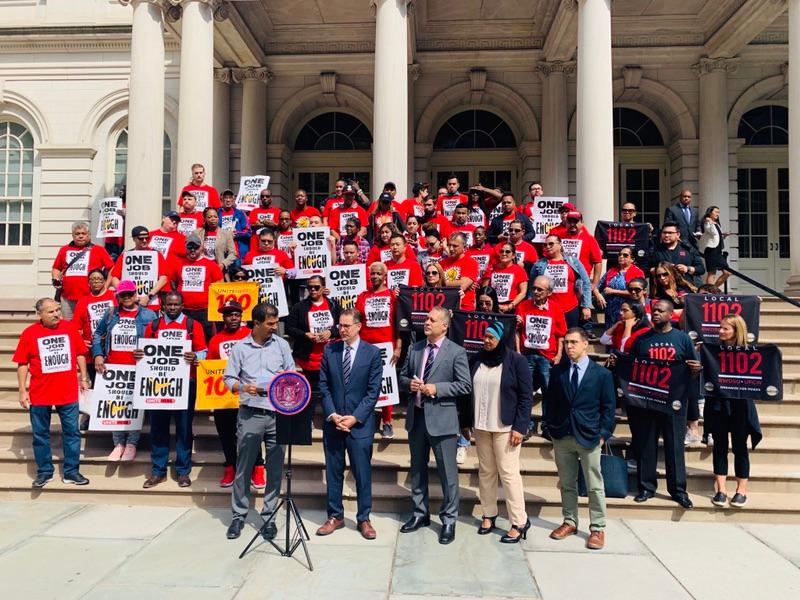 As of August 2019, more than 70% of workers who cater American and Delta Airlines flights from JFK were paid the state minimum wage, including dozens of workers who have been working for them for 30 years or longer. Many of these workers have no health insurance or depend on Medicaid and other public assistance for healthcare. Advocates will demand that the voices of these workers-thousands of whom have voted to strike when released from federal mediation-be heard.

To exemplify these inequities, according to a July 2019 letter from UNITE HERE to the National Mediation Board, over 60% of LSG Sky Chefs employees, which largely serve American Airlines’ and Delta Air Lines’ flights, earn less than $15 per hour and have healthcare premiums of over $500 per month for family coverage.

As of August 2019, more than 70% of workers who cater John F. Kennedy International Airport’s (JFK) American Airlines’ and Delta Air Lines’ flights were paid the state minimum wage, including dozens of workers who have been in their jobs for 30 years or longer, according to a March 2019 Issue Brief by UNITE HERE.

Lack of affordable health coverage among JFK airline catering workers is further compounded due to the fact that only 26% of workers who cater for American Airlines’ and Delta Air Lines’ flights out of JFK had employer provided health insurance in 2018, with less than 5% having a child or family member covered, according to UNITE HERE.

In June 2019, about 11,000 airline catering workers voted to authorize a strike, and on July 26, 2019, UNITE HERE asked for formal approval to be released from mediation from the National Mediation Board (NMB), which is the federal agency that oversees labor relations in the aviation sector.

That the Council of the City of New York calls on American Airlines and Delta Air Lines to ensure that airline catering workers serving their flights at John F. Kennedy International Airport (JFK) and LaGuardia Airport (LGA) are adequately compensated and have access to affordable, high-quality health insurance.

“We are a City that prides itself on the opportunities afforded to all of our residents, especially to our hard working immigrants. As such, we must ensure that our workers are protected from predatory corporations,” said Council Member Ydanis Rodriguez. “If these catering workers were of a different skin color or socio-economic status they would be enjoying competitive wages and good health coverage. More than 1,200 airline catering workers have threatened to strike if their conditions are not met. This fight is a national fight. Workers everywhere are mobilizing and fighting for adequate pay and health coverage. I applaud the catering airline union workers for mobilizing and loudly voicing their concerns and fully support their efforts.”

Bill Granfield, President of UNITE HERE Local 100 said “These workers serve the airlines at a time of historic prosperity in the industry, yet many of them have no health insurance or depend on Medicaid and other public benefits to protect their families. It’s an affront to our values that this crisis has persisted for so long, but workers are determined to end it now.”

Treat yourself when you take up to 70% off on exciting weekend getaways at LivingSocial.

“I want to commend my colleagues in the City Council, as well as the Unite Here Union for their advocacy on behalf of our airline workers. These are the men and women who work hard and are dedicated to providing quality service to the thousands of travelers who use our airports every day,” said Council Member Mathieu Eugene. “They are the foundation of our economy, and they have the right to equal pay and health insurance. It is not right when these workers, many of whom have over 30 years of dedicated service, are still struggling to provide for their families and lack the resources to receive quality medical care. As a city, we must do more to support our valued airport workers, and we have come together in solidarity to demand that they receive the equal compensation and high-quality health insurance that they deserve.”