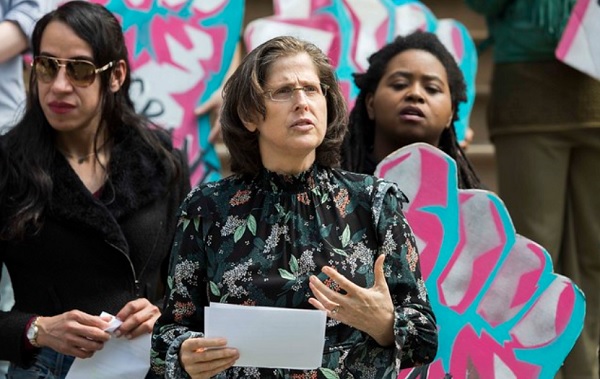 Uptown Council Member Helen Rosenthal’s legislation requiring a new Board of Correction task force to review the treatment and housing of transgender,

gender non-conforming, non-binary, and intersex people in Dept of Correction (DOC) custody was passed by the City Council today.

Council Member, Rosenthal’s bill is part of a legislative package passed today by the Council which also requires the DOC to provide full access to mental health and substance abuse treatment and services for TGNCNBI incarcerated persons. The DOC will be required to report about housing decisions made for this population as well. See the package here.

The legislation comes in the aftermath of the recent death of Layleen Polanco, a young transgender woman being held on Rikers Island because she could not pay her $500 bail. The cause of Polanco’s death has yet to be determined.

“Today, we are taking critical steps to better protect trans people in our custody and ensure that tragedies like the death of Layleen Polanco never happen again,” said Council Member Rosenthal, Chair of the Committee on Women and Gender Equity. “The legislative package we have just passed establishes New York City as a leader in reforming the criminal justice system to protect and uphold the dignity of TGNCNBI incarcerated people.”

“Nationwide and here in New York City, transgender people are overpoliced and over-incarcerated,” she continued. “And when transgender, gender non-conforming, non-binary, and intersex people land in jail, they are often misgendered, denied healthcare, placed in unsafe housing conditions, and suffer sexual abuse at disproportionate rates.”

Over one-third of trans and gender non-conforming people report sexual victimization in city jails. At a September 2018 Council hearing on abuse and harassment in the city’s correctional system, Council Members learned that there is a systematic failure to fully investigate and address instances of abuse in jails. Watch the hearing here.

Council Member Rosenthal’s bill, Int 1535 A,, establishes a task force which will bring people with lived, relevant experiences to the table, as well as local and national experts in transgender policy, to ensure safe, humane, and respectful treatment of TGNCNBI persons in custody.

In addition to representatives from the DOC, Correctional Health Services, the NYC Commission on Human Rights, the Mayor’s Office to End Domestic and Gender-based Violence, the NYC Unity Project, and the City Council, the task force will include:

“The Legal Aid Society fully supports the creation of a task force to review DOC’s policies related to the housing and treatment of transgender, gender non-conforming, non-binary, and intersex persons in custody, as described in Int. No. 1535-A. In order for a task force about issues affecting this community to be meaningful, it is critical for that task force to include and take seriously the people those issues affect. This bill not only mandates that the task force will include representatives from the New York City Department of Correction (“DOC”), Correctional Health Services (“CHS”), and the Human Rights Commission, but rightfully requires that the majority of members be people formerly or currently incarcerated in the Transgender Housing Unit, service providers, and national experts. We commend Council Member Helen Rosenthal for her attention to this issue, and we hope that DOC and CHS will participate openly and fully so that this task force is not simply a rubber stamp on the truly troubling experiences that our trans, gender non-conforming, non-binary, and intersex clients face in DOC custody,” said Tina Luongo, Attorney-in-Charge, Criminal Practice.

“Translatinx Network stands with our TGNC siblings and commends the City Council body on their commitment to ensure that our community is housed humanely and safely when under the custody of the NYC Department of Correction,” said Cristina Herrera of the Translatinx Network.

“As public defenders, everyday we hear about the horrific conditions and treatment TGNCI people experience while in Department of Correction custody,” said Deborah Lolai, LGBTQ Client Specialist at The Bronx Defenders. “For years, concerns and complaints have been ignored, while our TGNCI clients have been subjected to disproportionate and unacceptable levels of assault, harassment, and neglect. The creation of this task force is a critical first step in ensuring the safety and humane treatment of our TGNCI clients and making their concerns a priority. We hope that the task force will center the voices of our clients and other impacted people and serve as a catalyst for meaningful change. We applaud Council Member Rosenthal for her leadership on this issue and look forward to working with the task force.”

“We commend the New York City Council for requiring that a task force be convened to better understand how policies are impacting community members when they are incarcerated,” said Trevon Mayers, Director of Policy & Community Outreach at The LGBT Community Center. “The treatment of trans, gender nonconforming, nonbinary and intersex people in the criminal justice system is unacceptable—so committing to review how the system operates is an important step forward.”

“We are pleased to know the City Council is taking direct action by appointing a task force to address the serious lack of attention for our TGNC clients in DOC custody. For far too long, the Department has been running with little to no accountability, putting people in their custody at great risk. We thank the City Council and Council Member Rosenthal for leading this bill, and we look forward to working together to improve the safety of all people in our City jails,” said Lisa Schreibersdorf, Brooklyn Defender Services.

Within a year, the task force will release a publicly available report with specific recommendations regarding the treatment and housing of TGNCNBI people in DOC custody, and the DOC will be required to provide a written response within the following 90 days. The task force will continue to submit yearly reports until its termination, no sooner than one year after the issuance of a report in 2024.

Any time a new correctional facility is built, the Board of Correction will have the option of reconvening the task force.